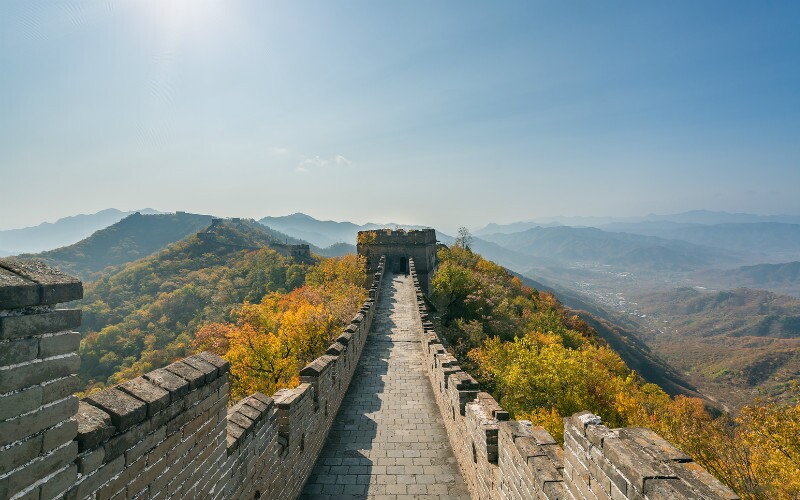 There were two separate "Great Wall" sections built by the Zhao State. The northern section became part of the Qin Dynasty Great Wall of China, when China was united in 221 BC.

About the Warring State of Zhao

The Zhao State (403 BC to 222 BC) was one of the seven major states during the Warring States Period of ancient China. One of its capitals was in Handan (邯郸), Hebei Province.

At the beginning of the Warring States Period, Zhao was a one of the weakest states, but prospered for a time, seizing large areas of land within the territories of the states of Qi and Wei. By the end of the period, Zhao was the only state strong enough to oppose the Qin State. However Zhao was defeated by Qin in 222 BC.

When the Zhao State "Great Wall" Was Built

Most ruins of the Zhao State Walls were found in Hebei Province, however the most visitable ones are in Inner Mongolia.

Built in 307 BC on the southern border of Zhao, with a total length of about 200 km (124 mi), this section of the Great Wall was to prevent invasion by the Wei State. There are still relics to be found in Linzhang County (临漳县) and Ci County (磁县).

The Southern Zhao Wall was built in the Hebei mountains, with soil and rock. There are about 400 meters of remains visible: trapezoidal, 1.5 meters high, base width 2.5 meters, top width 1 meter.

We don’t recommend visiting the southern Zhao State "Great Wall" relics, as they haven’t been developed for tourism, aren’t much to look at, and aren't very accessible.

The Northern Zhao Section of the Great Wall

From Zhangjiakou, Hebei to Inner Mongolia, the Northern Zhao Wall ran about 1,300 kilometers (800 miles). When Emperor Qin Shihuang united China and the Great Wall in 221 BC, the northern Zhao State Wall was used as part of the frontier defense against the Mongol leagues.

After 2,300 years of natural and human destruction, there are only a few remains of the Zhao "Great Wall" in Hohhot, built mostly with earth, and in the valley mouth area with stones.

Although it is not the best preserved section, it’s very popular because of its convenience in transportation.

Visitors to Zhao Temple (召庙, a Mongolian Lamaism temple) can climb the Great Wall and enjoy the beautiful view.