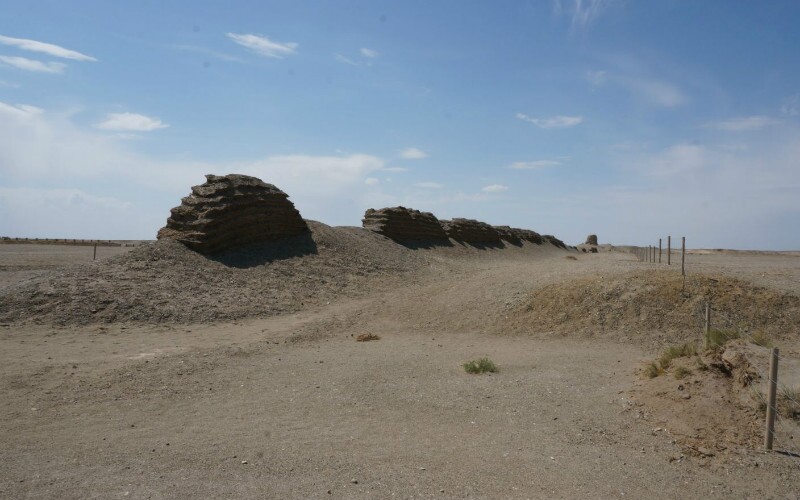 Inner Mongolia is the most representative Great Wall area in Chinese history. Today, the area assembles relics of these sections that have the most varied and plentiful contents.

From the early Qin Dynasty, to the Wei, Zhao, Qin, and Yan dynasties during the Warring States Period (475-221 BC) until the end of the Ming Dynasty, relics of the Great Wall sections built in each dynasty could be found in Inner Mongolia.

Why Was the Inner Mongolia Great Wall Built?

During the Warring States Period (475–221 BC), King Wuling of Zhao expanded the territories to the north and invaded the lands of nomads called "Linhu" and "Loufan". In order to consolidate newly conquered lands and prevent invasions from the northern nomads, King Wuling started building the Great Wall at the south foot of the Yinshan Mountain, starting from Wei County, Hebei Province, in the east to Bayannaoer League in Inner Mongolia in the west.

According to written records, more than 20  dynasties and vassal states in ancient China had participated in the construction of the Great Wall, and the Great Wall section in Inner Mongolia was built by 12 of them. There are a lot of mountain passes along the Great Wall sections in the area, which were once essential transportation lines and important markets for exchanging goods among different races for many dynasties.

In the long 2,000-year history of ancient China, there were never any interruptions in the construction of the Great Wall in Inner Mongolia, which is incomparable with other areas.

Many Dynasties Built the Great Wall Section in Inner Mongolia

Among the remaining Great Wall sections, there are no other parts that had been built by so many dynasties in other provinces, cities, and municipalities as those in Inner Mongolia.

Since ancient times, China has been a country with multiple ethnic groups. The Great Wall was built during the reign of different emperors as military defenses to consolidate their rulings.

The relics of the Great Wall built in Inner Mongolia during the Zhao, Wei, Qin, and Yan dynasties in the Warring States Period and different dynasties including Qin, Han, the Northern Wei, the Northern Qi, Sui, Liao, and Jin can be found.

Mongol leaders of the Yuan Dynasty and the Manchu leader of the Qing Dynasty also restored parts of the mountain passes of the Great Wall and constructed small sections of it.

The Longest Section of the Great Wall

Famous Sections of the Great Wall

The Great Wall Built by Qinshihuang

The Qin Dynasty Great Wall extends for more than 10,000 li (over 5,000 kilometers), starting from Lintao County, Gansu Province, in the west, across Yin Mountain in the middle and extending to the eastern and southern parts of Liaoning Province.

The sections of the Great Wall built on the largest scale after Qinshihuang are those built during the Han, Jin, and Ming dynasties.

The Great Wall of the Han Dynasty It starts from the northern and southern part of Liaoning Province to Yanze (now Lop Nur region in Xinjiang). On the northern part of Yinshan Mountain, an outer wall was built with a length of over 20,000 kilometers. The construction scale of the wall during the Han Dynasty was greater than that built during the Qin Dynasty.

The Great Wall of the Jin Dynasty

It starts from Moridawa Daghur Autonomous Banner, Inner Mongolia, in the northeastern part and continues to the Yellow River banks at the eastern suburbs of Baotou City in the southwestern part. Another wall starts from Great Khingan in the east and extends to what is now Del Gail Khan in Mongolia in the west.

The overall length of the wall built during the Jin Dynasty (220–265) is nearly 10,000 li (over 5,000 kilometers), which makes it another wall that was over 10,000 li besides the Qin Dynasty Great Wall. Most of the wall section lies in the prairie region; therefore, it is named "the Great Wall on the prairie".

Great Wall of the Ming Dynasty

It crosses five league cities with a total length of nearly 800 kilometers.

If you want see the Inner Mongolia Great Wall Section, the most convenient way is to take a tour. China Highlights' tours avoid the hassles of getting to and enjoying the Great Wall. See our most popular Great Wall tours.

We can also help you design a tour including the Inner Mongolia Great Wall Section. Contact us and tell us your requirements and interests, including other places you want to visit.