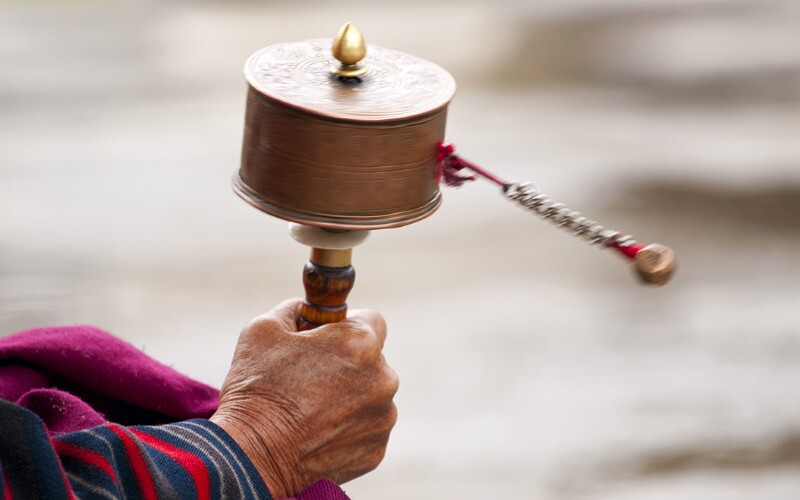 For the people of Tibet religion is highly important, and has a deep influence over all aspects of their lives. The dominant religion there is Tibetan Buddhism.

Tibetan people worship snow-capped mountains, lakes, and the color white. They believe that in snowy areas there is divinity in every mountain and that even the rocks have a spirit. They think that by circling around the sacred mountains, their sins can be cleansed, and hopefully they can reach nirvana.

For them, pilgrimage is the journey from ignorance to enlightenment. Because of this belief, pilgrims can be seen throughout the year circling around the sacred mountains.

While on pilgrimage, most of them walk, but there are some pilgrims who are so devoted that they prostrate themselves at intervals along the way. They chant their prayers while walking and prostrating themselves.

A pilgrimage takes scores of days, some even longer than a year. >>Read more about Pilgrimage Journey

It lies near Lake Manasarovar, a sacred lake. With an elevation of 6,638 m (21,778 ft), Mount Kailash is the main peak of the Gangdisê Mountains.

It is snow-capped all year round, wreathed by a sea of clouds and fog, with its unique shape like a pyramid on the mountain top, Mount Kailash looks magnificent and unconquerable under sunshine. >>Read more about Mt. Kailash Facts

For centuries, it has been a Mecca for pilgrims. Every year, countless pilgrims from India, Nepal, Bhutan, and all over Tibet go there to show their devotion. While for adventurers, Mount Kailash remains an insurmountable peak.

It is located near Yamdrok Lake, another sacred lake. Mount Nojin Kangsang is the most accessible glacier site on the Tibetan Plateau.

Nojin Kangsang was first climbed in 1986 by a Chinese team from the south, though now most adventures ascend it from the east, which is easier and does not present major difficulties and dangers.

Meaning "the God of Grassland", Nyainqêntanglha Peak is the watershed between the Yarlung Zangbo River and the Nu River (the Salween), and is the subject of much Tibetan folklore and myths. It is located near Lake Namtso, one of Tibet's sacred lakes.

South of Nyainqêntanglha Peak is the picturesque (hot spring), which is famous for its geothermal resources, including the largest hydrothermal power plant in China, and hot springs.

If you are looking to go sightseeing in Tibet, check out our top Tibet tours and add sacred mountains and holy lakes as the attractions when booking if they’re not included. All our tours are customizable. We can also create an expert itinerary from your requirements.