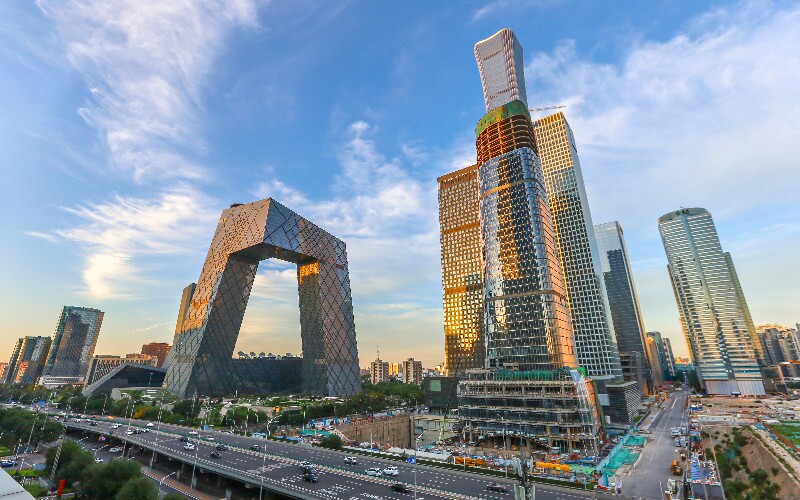 China uses almost half the world's steel and about half of the world's cement/concrete. These engineering wonders are just some of the things that have been built with all the material.

The Three Gorges Dam is the world's biggest hydroelectric dam. It is the biggest concrete structure in the world too. It cost about 56 billion US dollars to build. The dam's hydroelectric power plants became fully operational in 2012 and can produce 22 gigawatts of power.

The dam is in the Three Gorges region, and the 600-kilometer (380-mile)-long "reservoir" that stretches to Chongqing has become a favorite sailing region for cruise ships. See the huge dam and amazing scenery on a Yangtze cruise.

The world's second-tallest building opened in 2015. The Shanghai Tower, at 128 stories or 632 meters (2,073 feet) tall, dwarfs the Shanghai World Financial Center next to it.

To cope with Shanghai's deep, sandy river delta soil and typhoons, the tower has 70-meter (200-feet)-deep concrete piles and a spiraling cylindrical shape. It will be a showcase of 21st century engineering. To save energy, the tower is built like a thermos bottle with an outer skin consisting of two glass facades. Mitsubishi built the world's fastest elevators.

Another great modern engineering wonder of China is the high-speed train system. There are presently (in 2013) about 13,000 kilometers (8,000 miles) of high-speed train tracks laid. Bullet trains are planned to criss-cross the country and provide cheap, comfortable, and convenient transportation.

The trip takes 8 hours, and the price is economical: about 140 USD. The seating is comfortable and simple, like an airline cabin. Let us help you book tickets.

In 2012 China launched more rockets into space than the US did. A lunar mission to send an unmanned probe is planned for 2014.

Hong Kong Space Museum is one of the many great family things to do in Hong Kong.

To supply steel for China, the world's largest blast furnace at Caofeidian, Tangshan, can make 5 million tons of steel a year, worth 12 billion RMB, not even 1% of China's 700-million-ton annual steel consumption.

In 2006 the Qinghai-Tibet Railway connected Tibet, China's last province to have a railway, to the national rail network. The highest railway in the world (highest elevation 5,072 meters or 16,640 feet), with the highest station and highest tunnel, is one of the greatest feats in modern Chinese history.

Experience this modern wonder and Tibet for yourself on our Tibet Discovery Train Tour.

It is said that "20 new cities are being built every year in China". Though a lot of the new construction is becoming occupied, many large areas remain largely empty, such as Zhengdong New Area in Zhengzhou (reputedly "China's largest ghost city"), Ordos in Inner Mongolia, and Chenggong, Kunming. Aerial photographs of many new projects show big developments with almost no cars!

For example, the New South China Mall in Dongguan that was built in 2005, was once known as the largest mall in the world, but it is mostly empty. The BIGGEST BUILDING IN THE WORLD, the New Century Global Center in Chengdu, eclipses all other malls, and is faring better, though China's malls are looking at 30% vacancy in 2014. Housing prices are quickly rising in China, but this surely can't continue with such huge overbuild?