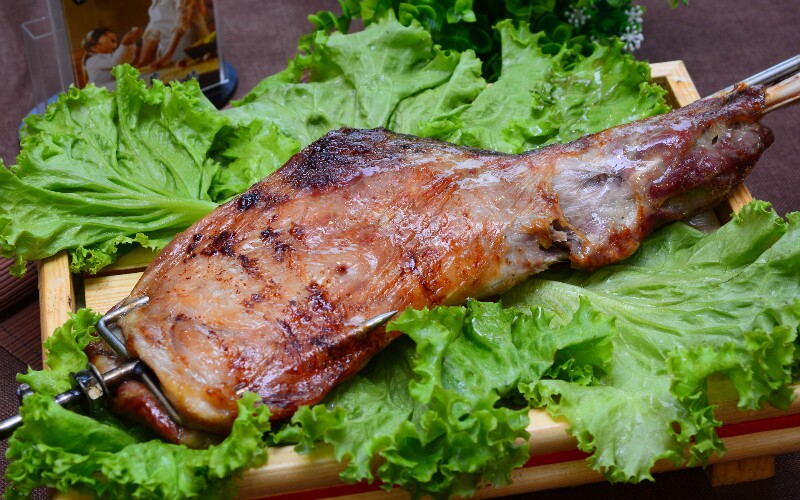 Lahmacun, thin Turkish pizza, is like the "naang" Muslim flat bread in China.

In Chinese, halal food is called Qingzhen Cai (清真菜). It is easy to find in most major cities in China because of the large Muslim population in China.

Muslim restaurants and food stalls are widely available in cities or towns because of a large number of Muslim migrants from western China. Most Muslim restaurants in China are run by these migrants. In addition, a number of foreign restaurants are also present increasing the variety of halal food for Chinese and foreigners alike.

Origin of Halal Food in China Seekh kebab with naan and chutney is a Pakistani/Indian halal dish found in China.

Chinese halal food appeared over 1,000 years ago during the Tang Dynasty when Islam was introduced to China.

Arabic businessmen, travelers, and missionaries traveled to China along the ancient Silk Road and settled in places like Xi'an, Kaifeng, Guangzhou, Quanzhou, Yangzhou, and Hangzhou. These Arabic people were the ancestors of today’s Hui people in China. Chinese halal food developed, and more dishes were created during the Yuan Dynasty when the Hui ethnic minority was formed.

The Variety of Halal Food

With the presence of a large number of Muslims in China, one can easily find Muslim restaurants in every city. In addition to delicious halal Chinese food, one can also have a taste of Muslim cuisine from around the world- the Mediterranean, Turkish, Mideastern and Pakistani/Indian cuisine, each with its own distinct style and flavors. 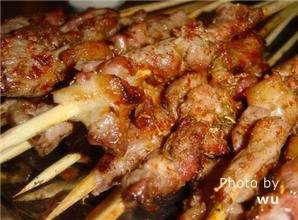 Chinese halal food blends the original Middle East flavors with traditional Chinese dishes, creating its own style. Wheat food and products are eaten more frequently than rice, and various dishes and snacks are made from wheat flour. Sweet flavors take an important role, probably related to Arabian Muslims’ preference for a sweet taste. Beef and mutton are also widely eaten.

The Xinjiang Uyghur cuisine (see Urumqi Food) is quite popular, with most Chinese Muslim restaurants offering this cuisine. Lamb kebabs are famous and it is not uncommon to see the barbeque stalls along streets, the characteristic aroma serving as free advertisement. Chicken and lamb doner with rice is a Turkish/Arabic dish that can be found in China.

A number of Arab, Turkish, Morrocan and Egyptian Restaurants can be found in major cities and you can have a taste of the unique cuisine of each area.

One can have a taste of hummus, falafel, tabouleh salad, shawarma, doner kebabs, kibbeh, to name but few. Shisha is also popular in some of these restaurants.

Most restaurants have a separate prayer room which is much needed by the Muslim guests. Some Pakistani/Indian restaurants can also be found in the largest cities. The cuisine is full of spice and flavor and is quite popular among many.

Famous dishes are Biryani and Pulao made of rice and meat, a variety of kebabs, Chicken or lamb karahi (thick spicy curry) and daal (lentils). Raita (yogurt with parsley and some spices) usually accompanies the dishes. Roasted Whole Lamb is the most famous dish in Xinjiang Province, and it can be found in major cities across China.

The dish is prepared with selected ingredients and is cooked using a special cooking technique. When preparing, a mixture of flour and water with yolk, salt, ginger, and pepper powder is applied to shroud the entire carcass. The lamb is then put into a specially made oven and baked for around one hour. It is trimmed with red silk around its neck and served with its mouth stuffed with fresh caraway. When eating, people use a knife to cut the mutton from the lamb. This kind of hand-pulled noodle is also known as the "Lanzhou Beef Noodles," one of the most common dishes in the local area. Visitors can see this dish being served on every corner of the city, and it has become a part of the local people's life. The noodle is handmade, and it takes a cook only one or two minutes to stretch the flour cake into many needle-like noodles. Today, small restaurants serving Lanzhou Beef Noodles can be found in almost every Chinese city. Most of them are hidden in small alleys or back streets.

Hand-taken Lamb has a history of around one thousand years. It is so named because the lamb is eaten with one’s hand.

The lamb is boiled in soup, with ingredients such as pepper, onion, and ginger. It is done when the meat is soft. The lamb can be served hot, cold or fried. Id Kah Mosque. Kashgar is a destination on the Silk Road with a strong Muslim culture.

Halal food has its own unique taste and flavor so why not explore the unique taste of Muslim food on your China trip. Let our local experts guide you as you explore the Muslim culture on a trip along the silk route, or you can have a tour specially designed for you, suiting your tastes and requirements.

If you are a Muslim on your first trip to China, rest assured there are many good halal food options in China and you won’t remain hungry. Let our guides show you the best halal restaurants, prayer facilities, and mosques in the areas you visit. Without a guide, it can be difficult.