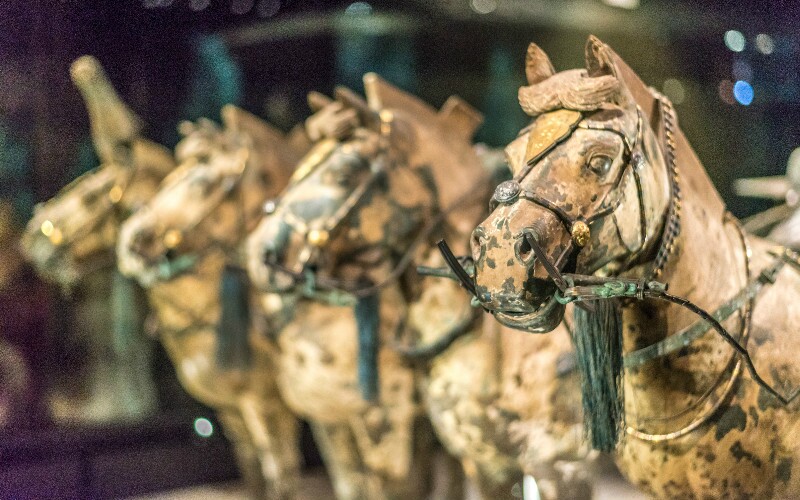 More and more foreign tourists are finding China is an ideal travel destination.

Tourism in China has boomed because of its abundant tourist attractions and enhanced tourist environment. More and more foreign tourists are finding China is an ideal travel destination. A continued increase in foreign tourists is expected for the next decade.

China covers an area of 9.6 million square kilometers (3.7M sq mi) and has a history of over 5,000 years. Famous historical and cultural sites, beautiful natural scenery, and interesting folk customs draw millions of tourists to China.

Beijing is the best place to help you learn about Chinese history during the Ming (1368–1644) and Qing (1644–1912) dynasties because Beijing served as the capital of six ancient dynasties, the most famous of which were those two dynasties.

The Forbidden City holds stories of 24 emperors who stayed there during the Ming and Qing dynasties. You can visit the palaces where they lived and worked. Pay a visit to the Summer Palace, which used to be the summer retreat for imperial families.

Visit the world’s longest wall — the Great Wall, a symbol of the Chinese nation. Learn about its structure – the walls, watchtowers, and fortresses – and why it was built.

You can learn about the history of the first emperor of China by visiting the Terracotta Army. Visit the Big Wild Goose Pagoda, which houses the Buddhist materials that Xuanzang brought back from his epic journey to India.

Go to Shaanxi History Museum to feast your eyes as you see large collections ranging from the times of ape-men to the Qing Dynasty before the Opium War in 1839, and from large bronze wares to exquisite golden carvings.

In Nanjing, you can learn more about the history of the Chinese revolution from 1912 to 1949.

You can visit Ming Xiaoling Mausoleum, the tomb of the Hongwu Emperor, Zhu Yuanzhang, from the Ming Dynasty and one of the largest imperial mausoleums in existence. Go to Dr. Sun Yat-sen’s Mausoleum to learn about the great deeds that Sun Yat-sen did for the Chinese revolution around the turn of the 20th century. Visit the Presidential Palace, which used to be the political and military center of China from the First Opium War in 1839 to Nanjing’s peaceful liberation in 1949.

You can visit the Longmen Grottoes, which hold over 100,000 Buddhist images and statues. Explore White Horse Temple, which is considered to be the cradle of Chinese Buddhism. Visit Luoyang Ancient Tombs Museum, which is one of the largest museums of ancient tombs in China and the first one in the world. You can learn about the characteristics of typical tombs in Luoyang over a period of 3,000 years.

Guilin is reputed as being one of the world's most beautiful places with its karst landscapes, clean rivers, idyllic countryside, and majestic rice terraces. Slow down and allow yourself to have a relaxing vacation in Guilin.

The Li River winds through limestone peaks, which look like giant bamboo shoots growing out of the green plain. Take a Li River cruise from Guilin to Yangshuo to appreciate the karst landscape. The rice terraces in Longsheng are really beautiful. When all the rice terraces are filled with water and bathed in sunlight, the reflections are magnificent.

Explore Zhangjiajie National Forest Park where there are breathtaking rock pillars, which form a forest of massive pillars. Take the world’s longest cable car ride to Tianmen Mountain to appreciate its towering peaks. After rainfall, the mountain is covered with thin clouds and mist. It is like a fairyland!

Oddly shaped pines twist directly out of the smooth rocks. Strangely shaped rocks make the Yellow Mountains a natural exhibition hall of rocks. The mystical sea of clouds adds an ethereal atmosphere to the Yellow Mountains, making the peaks look like islands in the sky.

You can hike up and down the mountains or take a cable car ride to admire the all-inclusive beauty. Explore off the beaten path in West Sea Grand Canyon. A sunrise at the Refreshing Terrace and a sunset at Cloud-Dispelling Pavilion are not to be missed.

Jiuzhaigou is on UNESCO's World Heritage List. It is famous for its stunning natural scenery of colorful lakes, mature forests, and spectacular waterfalls. The beautiful scenery attracts many photographers.

You can see beautiful alpine reeds swaying in the breeze in Reed Lake. See smooth blue water surrounded by dense trees gleaming under the sunlight in Sparking Lake. The reflected light jumps and flashes on the lake. Go to Five-Color Pond where the lake blazes with colors, such as green, light blue, and gray.

See the Top 10 Most Beautiful Places in China.

Guizhou is located in Southwest China. Many minority groups live in Guizhou, including the Miao, Dong, Shui, and Gejia.

Visiting an ethnic village is a good way to learn about the local customs. You can learn about their traditional handicrafts, such as batik in Matang Gejia Village and papermaking in Shiqiao Miao Village. You can also take part in the Miao New Year Festival (usually from October to November). The Miao people will dress up and parade to a neighboring village, worship ancestors, and perform antiphonal singing.

You can immerse yourself in the Tibetan culture in Tibet. There are many Buddhist buildings there due to Tibetans’ strong culture of faith. You can go to the Potala Palace, a testament to the Tibetan people and their beliefs, visit Jokhang Temple, the spiritual center of Tibet, and visit Yamdrok Lake, which is said to be able to help Tibetans find the reincarnated soul of the Dalai Lama.

The city of Kashgar has the most Uyghur characteristics. You can go to Kashgar Old City, the only traditional historical block with typical characteristics of ancient western regions that has been preserved in China. Visit Abakh Khoja Tomb to learn about the Islamic mazar (shrine) culture. Walk along Handicraft Street, which has an amazing range of handicrafts, including copper, metal, porcelain, woodwork, and other types of goods.

The Good Tourism Environment in China

China has developed a good tourism environment with large investments in tourism infrastructure, more favorable visa policies, and a safe environment. This decade, China has become the No. 1 destination for international tourism (if Hong Kong is included).

China has put billions of yuan into convenient transportation. It is accessible by airplane, ships, and trains from all over the world. In China, there are many convenient ways to travel between cities, such as by airplane, high-speed train, ship, and long-distance bus on smooth expressways. There are also many inner-city transportation options. You can take a subway train, bus, taxi, or shared bike. See The Best Ways to Go to China and Travel Around.

China has high-quality hotels and restaurants. With tourism being one of the fastest growing industries in China, hotels are fast improving their facilities to Western standards, especially in the major cities. Learn more about China Hotel Star Ratings: 1-Star to 5-Star. Similarly, the restaurants in China are also developing. English menus, comfortable dining environments, and different dishes are offered.

The attractions in China also have better infrastructure. In China, attractions are divided into five levels, rated according to their quality, with the highest level being AAAAA (5A). At present, China has 259 attractions with the level of 5A. A 5A scenic spot must have excellent parking facilities and convenient access, clean and tidy tourist toilets (most have Western-style toilets), professional guides, and an orderly management system.

As China is becoming increasingly popular as a travel destination, the entry and travel regulations are relaxing:

Generally speaking, China is a safe country to travel around and most people you meet are friendly, honest, and trustworthy. In major cities, such as Beijing and Shanghai, many young people can have simple conversations in English.

In 2018, the comprehensive contribution of tourism to China's GDP was 9.94 trillion yuan, accounting for 11.04% of the total GDP. The number of inbound tourists reached 141.2 million, an increase of 1.2% over the same period the previous year.

Most foreign tourists concentrate their visits in the coastal cities and a few inland areas, such as Beijing, Shanghai, Guilin, Chengdu, Yunnan, and Xi'an. As China's inland and western provinces develop, foreign and domestic tourism there is increasing. Places like Zhangjiajie are attracting more foreign tourists.

The Best Times to Travel in China

No matter which season you decide to travel in China, there are good places to visit. China shows different faces in each of the four seasons. However, the best times to visit China are spring (April–May) and autumn (September–October), when most of the popular places have their most tourism-friendly weather.

What are the highlights in different seasons in China? You can find the answers in the Best Times to Travel to China.

Usually, there are three ways to travel: independently, with a group, or to take a private tour.

If you like challenges and are well prepared for an independent China tour, then go ahead. If you are not prepared to face the challenges of traveling in China alone, there are two options for you: join group tours or take advantage of tailor-made private tours. See 11 Reasons Your China Tour Should Be Private and Not a Group Tour.

Why Our Private Tours Are Different

We care about you! China Highlights is the choice of discerning travelers: it’s excellent for families, small groups, and individual tourists who want flexibility, local expertise, a close personal service, and to be in control of their tours.

Our journeys are consistently ranked among the best in China yet they are more moderately priced than foreign tour companies of a similar ranking.

Respected and long established (since 1998), we have teams serving people of various language groups. We offer you a money back guarantee, and we strive for integrity and quality.

We are happy to show you the charm of China from different aspects. Just tell us your interests and needs, and we will tailor-make a unique China tour for you. See our recommended China tours for reference: