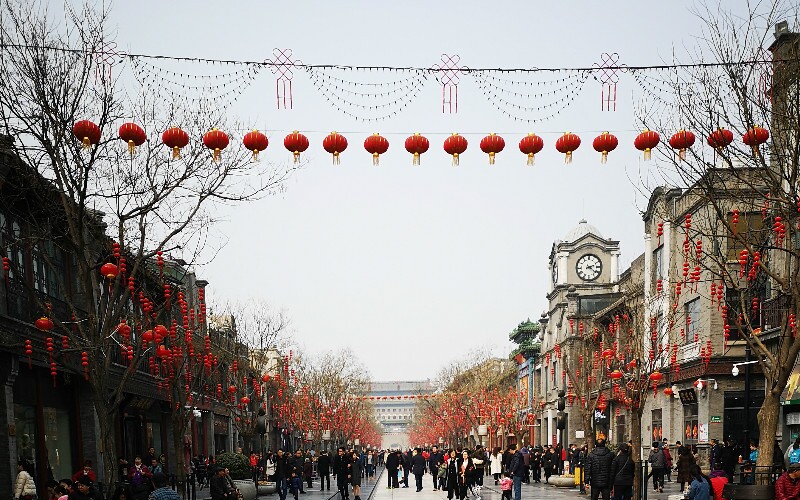 The street has a long history and rich cultural atmosphere.

Liulichang Antiques Street is now located outside Hepingmen, west to south and north Liu Lane in Xuanwu district and east to Yan Shou Temple street with a length of 800 meters. In Yuan Dynasty, official cave dwelling was set to produce glazed tiles. In Ming dynasty, since a series of palaces were to be built, the cave dwelling was expanded. Finally, Liulichang Antiques Street became one of the five factories of the industry department at that time.

There are many famous old stores at Liulichang Antiques Street including Huai Yin Shan House, the Old Art House, Rui Cheng House, Cui Wen Garret, Yi De Garret, LI Fishou Pen Store as well as China Book Store---- the largest old book store in China. Besides, on the west of Liulichang Antiques Street are three book bureaus---- the Business Book Printing Hall, China Book Bureau and the World Book Bureau. Among them, Rong Bao House is the most famous old store. Some people say Liulichang Antiques Street is famous for these well known old cultural stores such as Rong Bao House, which quite makes sense. Rong Bao House was first called Pine and Bamboo House and then changed by the emperor of the late Qing dynasty, Guangxu. The new name means to make friends based on literary works and that having a good reputation is means owning a priceless treasure. At the end of Qing dynasty, many famous poets, writers and artists such as You Ren (a famous calligrapher)，Zhang Daqian, Wu Chang Shuo and Qi Baishi (famous painters in China) usually visit here.

After the establishment of People's Republic of China, the traditional technologies of Rong Bao House became more popular and advancing, especially the copying technology. The copy works here are so real that they seem like the original works. Some works printed here, such as the Drawing of Wen Yuan and the Picture of Qing Ming Shang He, were exhibited in many foreign countries which obtained great compliments and high reputation in the international world.

Since the reforming and opening up, Liulichang Antiques Street has been repaired and rebuilt for several times which makes this famous old street emit new atmosphere. Today, the Liulichang Antiques Street cultural street which contains the books, pictures and paintings, antiques and the four treasures in the study in the world, has become the necessary view spot for the home and abroad tourists.

The book store collects all kinds of ancient books, rubbings on stone inscriptions, old books, newspapers and magazines during different periods. The new printed ancient books, other pictures involving some research work and the four treasures in the study are sold here. At the same time, various book exhibitions are held in the book store.

Four Treasures of the Study

Both the west and the east glaze factory sell the four treasures of the study. Many store are famous for the writing and painting brushes that are needed by those famous painters and artists.

Qing Mi House is the oldest and largest paper store full of the four treasures of the study.

Yi De House Ink Factory was built during Tong Zhi of Qing dynasty with a history of more than 100 years. The ink produced here can make the written words clear and shine so that you can write the words smoothly and easily. What's more, the written words are durable without fading and wetting the paper. The ink is regarded as the excellent grade among the four treasures of the study and is welcome by many painters and artists.

Ji Gu House is an old store specializing in copying and repairing the cultural relic and antiques. It has repaired much historical relic including various cultural relic, Tang San Cai, old bronze containers and old paintings which are so real that it is high spoken of in the international world.

The ancient and old books industry is one of the key industries in the Liulichang Antiques Street. It is the ancient books that give birth to the cultural street. The book businessmen of Jiang Xi province and He Bei province once take the main stream in the ancient book field sequentially. These books are involving the examination system of ancient time and some academic researches. In 1930s, more than 200 ancient book stores were opened and hit the record.