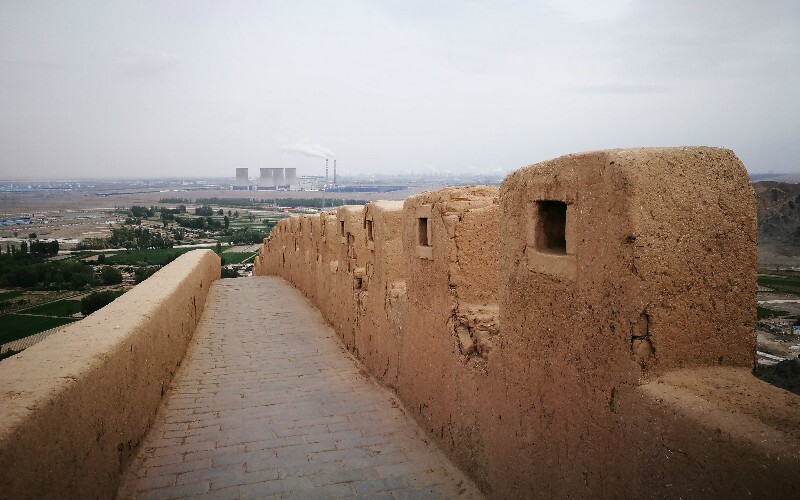 The Ningxia Guyuan Great Wall Section of the Qin Dynasty 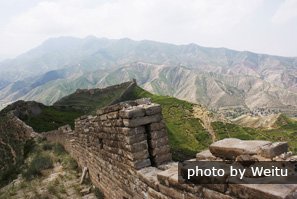 In remote north China, Ningxia (like Zhangjiakou) boasts of being a Great Wall Museum. The Great Wall was built there during many periods of history: by the Warring States, and the Qin, Han, Sui, Jin, and Ming dynasties, from 475 BC to 1644 AD.

Structure of the Ningxia Great Wall

The rammed-soil Great Wall in Ningxia Province made use of local materials, ranging from one to three meters (3–10 feet) high, with flanking towers protruding from the wall on average every 200 to 300 meters. Beacon towers, barracks, and forts were also built at the important passes and mountain tops. 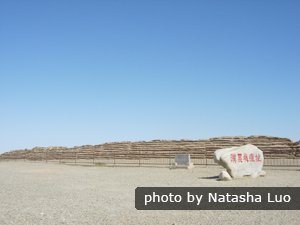 The rulers of the Han Dynasty (206 BC – 220 AD) continued to use the Great Wall built by the Qin Dynasty to defend against the Mongolians.

It was not until the reign of Emperor Wudi (156-87 BC) of the Han Dynasty that China's territory grew, and new Great Wall was built stretching as far as north Ningxia.

Emperor Wendi of the Sui Dynasty (581–618) ordered widespread building of the Great Wall, to defend borders against invaders from the north, soon after his succeeding to the throne in 581. His contribution was the 90-kilometer (56-mile) Great Wall section along the eastern border of today's Ningxia.

The Great Wall was built up to the north border of Ningxia during the Ming Dynasty, and is divided into three sections: the Old North Great Wall Section, the Helan Mountain to Yellow River West Bank Section, and the Long Embankment Section in Taole County.

The Helan Mountain (Zao'ergou 枣儿沟) to Yellow River West Bank Section was built in the 10th year of the Emperor Jiajing's reign (1531). This section served as north pass gateway. It was 20 kilometers (12 miles) long, but only a few damaged soil walls remain today due to desert erosion.

The East Great Wall starts at Hengcheng in Lingwu County, running east through Yanchi County, and ending in Dingbian County in Shaanxi Province. It was built in two parts: the Hedong Wall and the Hengcheng–Huamachi Wall.The first part, built in the 10th year of Emperor Chenghua (1474), was the Hedong Wall (the 'River East Wall'). 193 km (120 mi) long, numerous "品"-shaped deep ditches were dug outside for defense.

It was rebuilt in the 10th year of Emperor Jiajing (1531) as it had suffered great damage.

The second part, 180 km (112 mi) long, started in Hengcheng Village in Lingwu County and ended at Huamachi in Yanchi County Town. It was seriously damaged in Xingwuying Village in Yanchi County, therefore a 53-km (33-mile) ditch was dug along each side of the wall during the 16th year of Emperor Jiajing's reign (1537).

The Ming-era Inner Great Wall in Guyuan was built on the very site of the Qin-era Great Wall, stretching west-east for about 200 km from Xiji County to Pengyang County. It was built under the order of Emperor Zhaoxiang  (325-251 BC to defend North China from the Mongols, and still remains now.

Where to See Great Wall in Ningxia?

The ancient Great Wall remains can be seen all over Ningxia, but mostly in the mountains of Guyuan.

By air: Fly from Beijing to Yinchuan (about 2 hours), then to Guyuan (about one hour).

If you want to visit the Great Wall sections in Ningxia, China Highlights can help you. Contact us with your interests and requirements, including anywhere else you'd like to visit, and we will tailor-make your China tour.