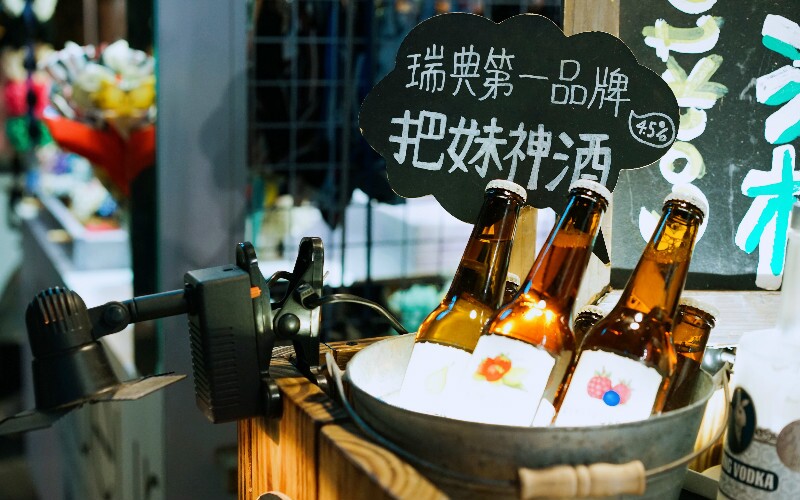 It is the biggest night market in Taipei, and it is known mainly for the variety of food. There is a big covered cooked food market, many restaurants, and many street vendors offering snacks.

Other than food, you can also find small clothing stores, knickknack goods and such products in the streets past the covered food market. See how many of Taiwan's favorite foods, beverages and desserts you can eat. Be careful about eating street vendor food. Whatever it is, make sure it is piping hot to kill germs, or looks like it's hygienically kept and not past it's consumed by date if it's cold food.

For liquid refreshment, try the various types of bubble tea and fresh fruit juice concoctions that Taiwan is known for. Taiwanese invented bubble tea. Depending on the season, you might get fresh mulberry juice, papaya milkshakes, or other seasonal drinks.

The main covered food market is next to the Jiantan Station. But the whole Shilin night market isn’t housed in just this one covered area. There is a group of adjacent streets to the north such as Wenlin Road, Dadong Road and Danan Road, and Jihe Road where locals go.

How to go there: Jiantan Station is about 100 meters to the south of the market area. It is about 4 kilometers or 6 miles northeast of Taipei 101. So if you are starting out from the Taipei 101 area, as with going to Ximending Market, you could take the train from Taipei City Hall Station that is about a kilometer north of Taipei 101.

If you are stopping over at Taipei International Airport and from the right countries, you are eligible for a free guided tour.

Taiwan’s tourism industry is booming. Seven million foreign tourists arrived in 2012. Maybe part of the reason is that the government is going out if their way to be hospitable! They sponsor a free half-day tour that takes you from the airport and brings you back.

If you have a transit or transfer at TPE (Taiwan Taoyuan International Airport), why not go on a 4 or 5 hour tour courtesy of the government? A FREE tour. This is a must do if you want to see some of northern Taiwan’s main sightseeing places and you are able to get a place on the tour.

The morning tour goes to an old town called Yingge that is known for its ceramics museum and its ceramics wares. You can sightsee for a while in the narrow streets. Then, the bus goes to Sanxia and then on to the Zushi Temple. The afternoon tour is the best unless you really like ceramics and old temples. In 5 hours, it covers some of the best tourist landmarks and highlights in Taipei.

See the Taipei 101 Building, Longshan Temple, the Presidential Office Building with an interesting mix of Renaissance, Baroque, and Neo-classical design and interior decorations; the Chiang Kai-shek Memorial Hall, and the Martyrs' Shrine — a fine attempted recreation of Ming Dynasty architecture.

Transit or transfer passengers with 7 to 24 hours before their next connecting flight, and who have a valid R.O.C. visa or come from countries eligible for visa-exempt entry can participate.

People from about 30 countries including Americans and people from any Schengen country get visa-free entry. Also eligible are citizens from India, Thailand, the Philippines, Vietnam and Indonesia who hold a valid visa — or permanent residency — to the U.S., Canada, Japan, or the U.K.

Registration & Pick-up: Tourist Service Center, Airport Arrival Lobby. Participants must sign up at the Tourist Services Center at the airport from 7 am to 11:30 am. Seating is first come and first served.