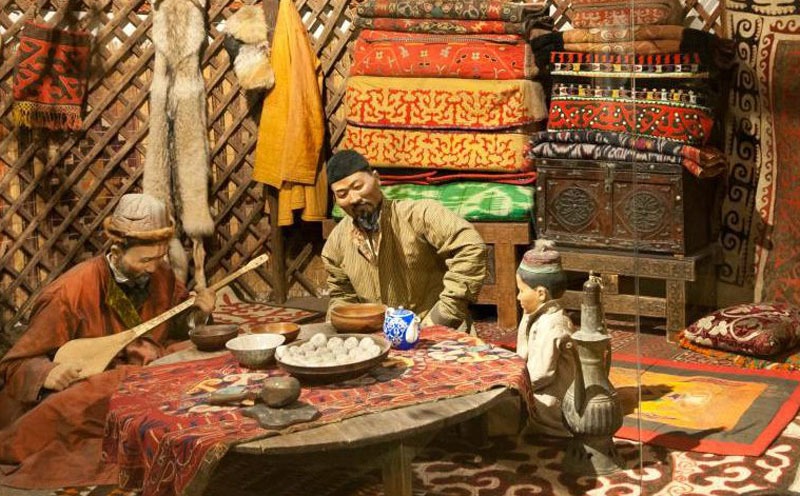 There are about 2 million Kazakhs in China, and most live in Northern Xinjiang and in the Tianshan Mountains. They have historically shared Xinjiang with the Uyghurs who are the largest ethnic group. They were pastoralists in the mountains and grasslands while the Uyghurs were agriculturalists.

They are a mixed people who speak a Turkic language similar to Turkish and Uyghur, and their ancestral home is around the area of Northern Xinjiang. They are the second largest ethnic group in Xinjiang after the Uyghurs, and in the past were herdsmen, merchants, and raiders on the Silk Road.

Tourists in Xinjiang enjoy visits in the mountains for hiking and horseback riding, staying in their yurts, and eating their dairy products and meat dishes.

Where Kazakhs Live in China

In the summer, Kazakhs like to ride in the mountains of Xinjiang.

The Kazakh people group are actually quite widespread across Eurasia because during the Mongol conquest, the Mongols led the ancestors of the Kazakhs and Uyghurs to invade westwards to Europe. Nowadays, the largest number of Kazakhs, about 16 million, live in nearby Kazakhhstan. About 2 million of them live in Xinjiang, and another 1.5 million live in adjacent regions in Russia, Mongolia and Uzbekistan.

Within China, the vast majority live in Xinjiang that is their ancestral homeland. They are about 7% of Xinjiang's population. They occupy the northern grasslands and mountain chains of the vast province. They live alongside two other major Muslim ethnic groups, the native Uyghurs and the Hui people who migrated from Gansu Province and the rest of China.

Some have moved to work and study around the rest of China or have moving overseas, but they are generally less educated and wealthy than the agriculturalist Uyghurs. Most prefer to stay put in and around their homelands.

Before the Mongol Conquest of 1200 AD

The ancestors of the Kazakhs had been active, before Christ, around the area of northern Xinjiang. These places include Altai Mountain, the Tianshan Mountain range, the Ili River Valley and Issyk Kul Lake. They were one of the earliest exploiters of the ancient Silk Road. They either raided or carried on business.

In the 500s and 600s AD, the Basmyl tribe inhabited the big lowland and desert lands of northern Xinjiang called the Jungar Basin. In the 700s, there became the leaders of a confederation of tribes.

There was a lot of warfare between the Basmyl tribe and surrounding countries. Then about the year 1000 AD, the Basmyl people and other tribes formed the Kara-Khanid Khanate that had control of a big area from Xinjiang to Uzbekistan. Kashgar was one of their major cities. It was strategic because it controlled the main Silk Road trade corridor.

Control of the Silk Road trade route made the people cosmopolitan. They became wealthy, and they became ethnically mixed with Persians, Sogdians, Arabs, and Han Chinese. From the year 1,000 onwards, travelers marveled about their wealth and their prosperous agriculture. This state continued for about 200 years until the Mongol invasion.

About the year 1220, the Mongols invaded the area. Under Mongol control, the region continued to be rich. When the big Mongol empires disintegrated, various Turkic ethnic groups arose out of the fragments in Central Asia. They spoke related Turkic languages.

The Oirat people and other Mongolian tribes took over control of northern Xinjiang after the end of the Mongolian Yuan Dynasty (1279–1368). A Dzungar Kingdom of Mongolian Buddhists arose in the area in the 1600s.

The Qing Empire (1644–1912) decimated the Mongolian Dzungar Kingdom in 1761. Almost all of them were killed or fled. Then Kazakhs migrated back into northern Xinjiang, and the Qing Empire also moved Uyghurs in to farm the land.

Due to their pastoral livelihood, the traditional diet contains lots of meat such as beef, mutton, and horse meat. They love cream, ghee, milk, milk tofu, and butter. They like to make wheat flour into fried pastries, pancakes, hot cakes, and deep-fried pancakes. They also eat rice.

Drinks: They like to drink cow milk and sheep milk and especially “Manai Zi” that is made of fermented mare milk. Tea is esteemed. Brick tea is their favorite kind. Milk and salt might be added to make milk tea.

Special meals: For special celebrations and for honored guests, they like to serve mutton and especially horse meat. Their custom is to bring out pots and washbasins for the guests to wash before the meal. Then they put trays before the guests with sheep heads and prime sections of meat. After that, all the people start eating.

When they finish, people customarily put their hands on the face to pray. If there are men and women guests, they usually sit at separate tables.

An effect of being on the Silk Road is that wealthy Kazakh people like to wear silk and satin for special occasions.

Kazakh men wear white shirts with high collars and embroidered edges and black overcoats with velvet surfaces. For riding convenience, they prefer trousers with a big crotch and knee-high cowhide boots. Caps are made of animal skin.

Women wear colorful one-piece dresses and waistcoats. Common dress fabrics include fur, silk, satin, velvet, cotton and feathers. Their flower-patterned caps are decorated with bird feathers. Trousers and sleeves are embroidered, and the upper garment is decorated with silver coins and colorful beads.

The Kazakhs respect the elderly. They invite elders to eat and drink first. When having dinner, the elders sit down first. People sit around the round table with legs crossed, or they might kneel down on the felt. During the meal, the best meat shall be offered to the elder people. The Kazakh people have many taboos such as that young men can’t drink alcohol before the elders, they can’t step over a dinner cloth, and they can’t sit on boxes or other things that contain food.

Other customs include: avoid counting the number of livestock while the owner is watching; avoid stepping over a rope that is used to tie livestock; avoid riding horses into the flocks; avoid praising other people's children; and particularly don't say a child is "fat." This would bring misfortune to the child.

Following Islamic food laws, they avoid eating pork, dog, donkey, mule, the meat of the livestock which die naturally, and the blood of animals.

Yurts set up in a sheltered meadow

The Kazakhs were traditionally nomadic. Their custom was to go up into the mountains to graze their livestock in the summer, and then to come down in the fall when it is cold. During the winter, they sheltered in the lowlands. For this kind of lifestyle, they lived in felt yurts that were warm enough in Xinjiang's freezing winters and light enough to transport.

The felt yurt design is millennia old. The felt is made from animal hair. The yurt is divided into two parts. The lower part is a cylinder, and the upper part is a dome. It is suitable for all seasons except winter.

The lower cylinder is reinforced by a wood framework made of intertwined branches and sticks. On the top of the felt house is a skylight covered by movable felt for ventilation. There is a felt door. Generally, it is 1.5 meters high and 0.8 meters wide, and is built high above the ground to guard against snow and cold. Long wooden poles provide the main structural support and support the roof.

In the winter that in Xinjiang lasts up to about April, people may live in earthen houses with flat roofs. They try to build these houses in sheltered areas such as ravines that provide shelter from the strong wings and driving snow.

The houses are generally square in shape, and they have iron stoves, brick ovens or at least fire places inside. The low walls might also be made of stone and clay bricks.

The Kazakhs' festivals are closely related to religion. Their major festivals are the Corban Festival, the Rozah Festival and the Noroz Festival. The first two are Islamic, and the Noroz Festival is the traditional and the most time-honored ethnic festival for the Kazakhs. According to the ancient Kazakh calendar, this festival represents the advent of the New Year. Thus, this festival bids farewell to the past year and welcomes the new.

The Noroz Festival falls around March 22. On this day, each family will cook and eat Noroz rice that is made of seven ingredients including wheat, millet, rice, flour, salt, meat and milk. Noroz rice is fragrant, delicious and nutritious.

People will wear colorful costumes to visit other families, embrace each other, and extend greetings and best wishes. The host will treat guests with the Noroz rice. After the meal, people sing, dance, and hold entertainment and sports activities such as guessing riddles, reading tongue twisters, playing Dongbula (a kind of traditional musical instrument), and wrestling.

The Corban Festival is an important Islamic festival in their annual calendar. They celebrate it on the tenth day of the second month of the Islamic calendar.

Touring Kazakh Areas with Us

China Highlights can take you to visit the Kazakhs at Heavenly Lake.

Kazakhs in the summer and fall invite travelers to stay in their yurts and go horse riding in the Tianshan Mountains. The South Pastures about 2 hours south of Urumqi are popular, and another place for hiking and yurt stays is around scenic Heavenly Lake. See our Xinjiang Hiking Guide.

Our expert guides can help you keep in line with government regulations and also ensure a warm welcome among these traditional people.