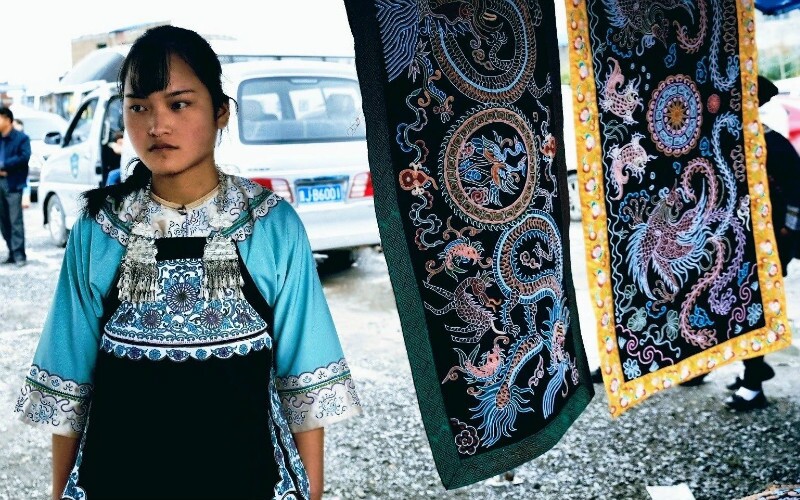 The Shui Ethnic Minority in China

The Shui are one of several lesser-known Chinese ethnic minorities in Guizhou Province, southern China. As their name hints at, they're known for living near water (shui means 'water').

The Shui (or Sui) people have a strange history. Somehow, about 1,700 years ago (dates are not clear), tribes people living along the coast of China traveled about 1,000 kilometers or more to live in the valleys of Guizhou Province. Both their language and their culture are somewhat distinctive compared to the ethnic groups around them with different origins. They still retain some aspects of the lifestyle of coastal people though they live in mountains.

They live among other interesting ethnic groups such as the Buyi in fairly beautiful, still underdeveloped lands.

Where the Shui Live in China

There are about half a million Shui. They dwell in southern Guizhou, and a small number live in Guangxi. About half of them, or about 250,000 people, live in Sandu Shui Autonomous County. Others live in nearby Duyun and Libo. About 90 percent of the Shui live in Guizhou.

They like living next to rivers. Their homeland is the upper part of the Duliu and Longjiang Rivers in the south of the Miaoling Mountains in the Yungui (Yunnan-Guizhou) Plateau. It is named the "the land flowing with milk and honey" because its dense forests and picturesque landscapes make it suitable for agriculture and forestry.

Their villages are close to those of other ethnic groups such as the more numerous Buyi and Miao.

Languages of the Shui People

Shui people have their own language. It is part of the Sino-Tibetan language system. They also have their own ancient writing system called "Shui Shu" (Shui Letter) that is over 2,000 years old. It has about 400 words in shapes like oracle bone inscriptions, and it is mainly used in witchery. Most Shui people cannot recognize this language, and they use Mandarin Chinese in their daily life.

The Shui people are the descendants of the Luoyue people who lived along the coast at least about 900 kilometers south or southeast of where they are now. Shui means water in Chinese, so the name Shui people refers to people living along the waterside. They mainly dwell along the rivers and streams, and their living customs, worship, and folklore all revolve around water.

It is as if they transposed their way of life along the coast to living besides rivers, ponds, and lakes in river valleys. It is thought that during the time of the Han Empire (206 BC – 220 AD), or maybe after its fall, they were forced to move from the coastlands.

Men mostly wear blue or green clothes with cloth-wrapped buttons down the front. Cotton is the most commonly used fabric. They also wear a blue or black turban around the head and baggy trousers.

Women often wrap their heads with a turban, and they usually arrange their long hair in a bun and insert a comb in it. They wear a collarless gown reaching to the knees of colors including blue, green and gray and also a long embroidered apron. On festive occasions, women wear a variety of ornaments, necklaces, and bracelets made of silver or tin alloy.

Rice is their staple food, and they like eating glutinous rice and fish they get from the rivers or fish ponds they build. The Shui people are not very good at growing vegetables, therefore limited varieties are consumed. They pay more attention to fishing and livestock breeding for meat. They also grow and eat some corn.

Their sour soup is very appetizing. It consists of pickled materials including hot pepper, tomatoes, fish, shrimp, the bones of pigs, and beef. Then vegetables are added into the soup and boiled. So the soup is much like a hotpot. The Shui people eat it all year round, and rarely do they make fried dishes.

The Shui people like drinking wine. Their traditional Jiuqian Wine has a history of more than 2,000 years.

The traditional houses of the Shui people are of "pile dwelling" architecture constructed from fir and pine wood and covered by fir bark or tiles. There are usually two or three stories. Fowls are sheltered under the house, and people live upstairs. The number of the rooms is one, three, five, or seven; it's considered taboo to have even numbers.

Customs of the Shui

Shui people have a clan-based hierarchy. An elder of seniority will hold a conference to discuss family affairs concerning moral and domestic disputes. Whenever one family holds a wedding or funeral ceremony, support will be provided by other members of the clan. The clan can possess its own cemetery, mountain forest, grassland, water source, fish pond and river.

The division of labor in the family is traditional: men work in the fields while women tend to the houses. Men mainly plough and harrow the fields, feed the cows and horses, transport the farmyard manure, and harvest grain. The women are in charge of rice seedlings, planting, field care and vegetable garden care. Shui people particularly pay attention to family image. Families with the same surname live together as a clan whose members obey the clan rules.

On the night of the wedding, the bride sleeps with her bridesmaid. On the next day, the bride will return to her parents’ and live there until her husband comes to her house and fetches her back. Then they will start their life as a couple.

Among the numerous festivals, the Duan Festival is the grandest one for the Shui people. It is equivalent to the Chinese traditional Spring Festival. According to the Shui calendar, a year is divided into 12 months and 4 seasons. The New Year falls in a period equivalent to August to October of the Gregorian calendar. During this period, they celebrate the harvest, bid farewell to the past year, and welcome the New Year. The exact dates ofthe festival differ in different clans and villages, so it lasts for as long as 49 days. It might be the longest festival in the world.

The Shui people wear their best costumes and gather in their villages to offer sacrifices, watch horse races, and sing and dance together. Fish is a must dish. People prepare it by stuffing chives, ginger, garlic, shallots, peppers and other condiments into the fishes' bellies. Then they wrap and steam the fish until it’s done. The fish symbolizes the ancestors of the Shui people and clan prosperity.

Visiting the Shui, Buyi, and Miao Villages with Us

The Shui villages are located in a heavily ethnic region in southern Guizhou Province. This area is famed for interesting and diverse ethnic villages and towns of the Buyi, Miao, and other people amid a beautiful scenic area. Two interesting heavily-built Buyi stone villages for example, Stone Village (Shitou Zhai) and Zhenshan, stand in marked contrast to the pile dwellings of the Shui.

You can travel to the Shui region fairly easily from many cities across China by the Guiyang-Guangzhou High-Speed Railway. We can help arrange your tickets and accommodations if you wish. But convenient and quick transport within the ethnic area to drive to various villages and sights requires a good driver. We can arrange reliable transportation and a knowledgeable guide.

Having a local guide and interpreter is important for helping you find the best places. We can take you to visit with families and arrange accommodation and transportation, and our expert guides can translate for you too.

Or add Guizhou and other destinations as shown below:

You can send us your ideas to modify the tours above. See other Guizhou tours. Inquiry is free, and receive a response within 24 hours.