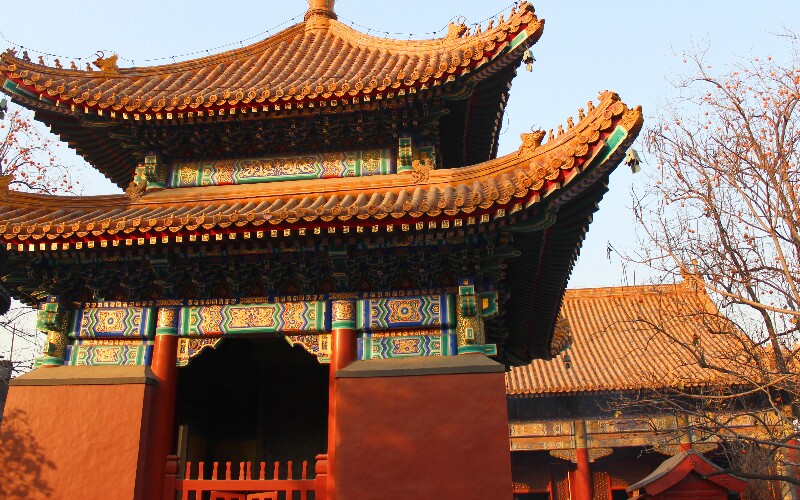 The 5 Best Buddhist Temples to Visit in Beijing

The hassle of the holidays often leaves tourists worn out with early morning starts and a full day run-around. For those seeking some peace and serenity Beijing offers this and much more at its numerous and diverse Taoist and Buddhist temples. Here are our favorites:

The Lama Temple is one of Beijing’s most famous temples (second only to The Temple of Heaven) and is high on the list of sites that of most visitors want to see. If you are in the right area, you cannot miss the Lama Temple. Anyone on a street nearby can smell the burning incense and hear the bustle of worship coming from inside.

Tourists enter through a tree lined walkway and then weave their way through a multitude of small halls. The Buddhas inside the halls get gradually larger until tourists reach the edge of the temple and the grand hall that houses the reason why people make return visits to the Lama temple, a magnificent wooden Lama statue carved from a single sandalwood tree. The roofs are painted in a golden color which shows the importance of the temple during imperial times. Tourists can buy incense to offer at the different halls and can watch the Lamas that live in the temple going about their daily routine.

Although this temple can often be crowded, visitors can always find a hidden place of solitude to taken in their surroundings.

The oldest and largest temple in Beijing, the Tanzhe Temple is believed to be older than the city of Beijing itself. Located in the dramatic hills

surrounding the city this temple is definitely worth a visit if you are looking to escape the crowds for the day. The area around Tanzhe Temple is as stunning as the temple itself, filled with ancient “Zhe” trees and houses the famous Dragon Lake.

The temple complex itself is on several different levels with each hall dedicated to a different deity. This is worship on a massive scale and the intricate design in the buildings makes the area both intriguing and mysterious.

One of the oldest and largest Taoist temples in all of China, the White Cloud Taoist Temple is situated in the Xicheng district of Beijing and is home to the Chinese Taoist association. The temple is a maze of shrines and courtyards that are tended to by around 30 true and devout resident monks. The White Cloud temple was originally constructed during the Tang dynasty but has been renovated multiple times.

This government protected and internationally revered temple welcomes guest both devout and secular. This temple is particularly note worthy for the temple fair held here over Spring festival but its beautiful Taoist style makes it worth a visit at any time of year.

A semi-distant twenty five kilometers outside the center of the city, nestled tightly within the mist of the Ma’an Mountains to the West of the city lies the hidden gem of the Beijing temple scene, Jietai Temple. This temple is only 8km from Tanzhe temple and so tourists can make a nice day out of visiting both temples. You can either have a ride most of the way up or enjoy the hike up the mountainside by foot - take in the vast surrounding vistas and then experience the temple itself.

The temple features delicate carvings and visitors can worship at the beautiful marble alter. Moreover, this temples crowning glory are the ancient trees that can be found in the courtyards. 3 grand, bronze Buddhas sit among huge pines trees and it is said that the trees here have inspired many famous songs.

Although it is not in the center of the city, Fahai Temple is conveniently located by the Pingguoyuan Subway Station. Fahai Temple lures visitors with a combination of history and culture. Built in 1439 the temple offers numerous historical artifacts and statues still intact and well preserved.

The main draw for visitors are the Ming dynasty murals painted by the temple's former artisans. Some of these paintings are nearly 500 years old and they are still painted using the originally intended colors.This makes it an exception among Beijing's temples.

A peaceful and relaxing national treasure, Fahai Temple is an intriguing temple visit.

See the Best of Beijing's Temples with Us

Experiencing these temples offers insight into the current state and culture of China. For these and so much more in Beijing see below, because no one covers Beijing and China with the combination of experience and flexibility of China Highlights.

...Or we can create your own unique tour to your requirements.