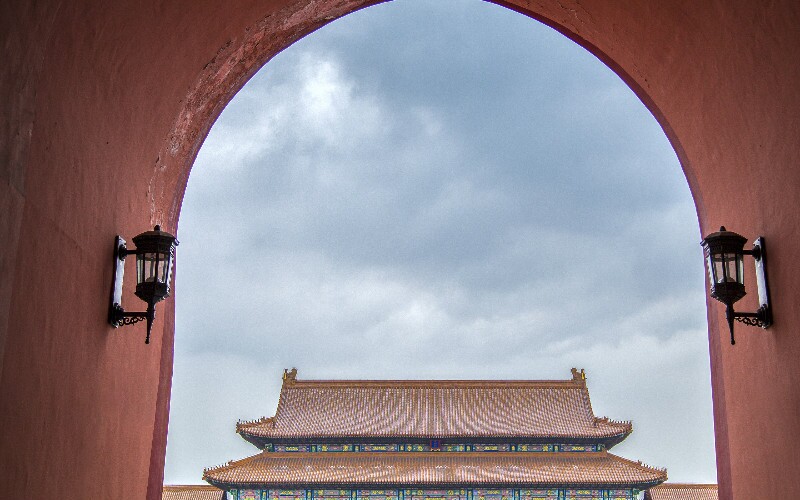 In addition, according to the ancient Chinese compass, the Meridian indicates the south, so the Gate also serves as the southern gate to the Forbidden City.

The Meridian gate was the place where the Emperor announced the new lunar calendar on the Winter Solstice (the first day of the 19th lunar month) each year. When ageneral returned from a battle, his captives would be "offered" to the emperor in a ceremony here, which was known as a victorious ceremony of "Accepting War Captives".

Before this ceremony the Emperor would pay sacrifice to altars such as the Altar of Earth and Grain (in today's Zhongshan Park)and the Altar of Imperial Ancestry (today's Cultural Palace of the Working People), which are close to the Meridian Gate.

It is said that the capital punishment was carried out outside the Meridian gate but the there are no accurate records to verify this. Nonetheless the famous "Ting Zhang" or Court Beating (a penalty to punish those offending officials by beating them with heavy sticks on their hips) did take place in the courtyard in front of the gate.

It is recorded that in 1519, more than 130 officials tried to dissuade Emperor Zhu Hongzhao of the Ming Dynasty from going out to the south to select beautiful girls. The official's discouragement offended the Emperor and these officials were beaten and 11 of whom were even beaten to death on the spot. Fortunately, this cruel punishment was abolished in the following Qing Dynasty.

Through the Meridian Gate, across the Golden Stream Bridge is the Hall of Supreme Harmony. It was the highest and most important building throughout the nation during the Ming and Qing times.

What are some interesting facts about the Forbidden City?