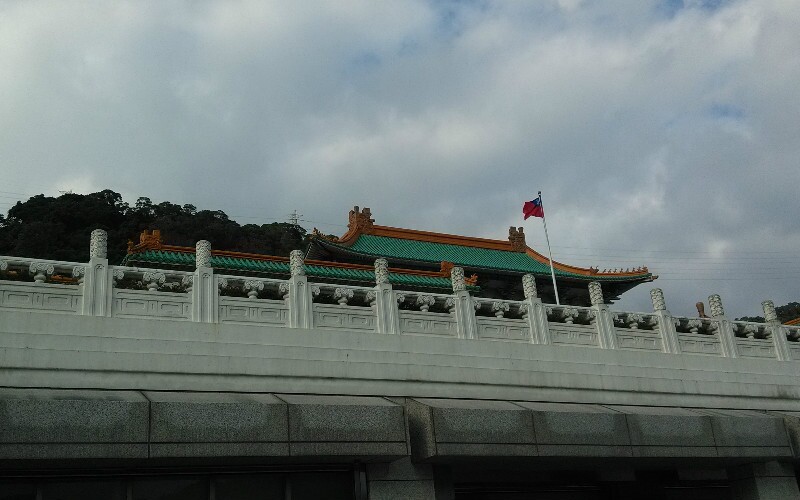 Both palace museums are very popular and house exquisite antiques, but they are quite different. Here are the top 10 differences pertinent to tourists.

1. Their Chinese names' only difference is the word 'National'.

The two "Palace Museums" have similar Chinese names and their translations have led to some confusion:

2. The Forbidden City is much bigger.

The whole fortress is rectangular and measures 961 meters (3,150 feet) from north to south and 753 meters (2,470 feet) from east to west (72 hectares or 180 acres). It is an impressive fortress and palace. See more Forbidden City Facts>>

3. The Forbidden City is the actual restored imperial palace.

The Forbidden City even has its own moat.

The Forbidden City is the largest of three imperial palaces remaining in China. It was built by the Ming court in 1420 and served as the imperial residence until 1924. The palace was the fortress of the Ming (1368–1644) and Qing (1644–1912) dynasties.

When you are in it, along with seeing the antiques and artifacts on display, you can see the walls, streams, gardens, grand assembly courts, monuments, and 980 wooden structures that UNESCO calls the greatest collection of wooden buildings on earth that were enjoyed by the emperors of the Ming and Qing over more than 600 years. Now you can enjoy it too. See more on Forbidden City History.

The National Palace Museum is a modern building, built in 1965, with some imperial palace architectural features, like the roofs and steps. Its primary building has four floors. The first, second and third floors are used for exhibitions, and the fourth floor is a lounge where visitors can rest. While there, you can enjoy the large park and garden area. There is also a public library and gift shops.

4. The Beijing Palace Museum's collection is much bigger.

Exquisite vase on display at the National Palace Museum

During the Chinese civil war after World War II, the retreating Nationalists moved about 600,000 pieces from the Forbidden City to Taiwan. With added donations from private collectors and museums, the collection now has 700,000 antiques and artifacts spanning many dynasties and 8,000 years of the history of Chinese art from the Neolithic age to the modern.

However, because display space is limited in the National Palace Museum, only about 1,700 pieces are on display at a time. Some of these pieces are the most famous ancient paintings and the choicest treasures of jewels, fine ceramics and particularly valuable articles from the Qing imperial family.

At the end of 2016, the Palace Museum in Beijing announced that the total number of items in the Palace Museum collection is 1,862,690. However, because of space constraints, less than 1% are on display at any one time.

Two of the exquisite clocks in the Forbidden City's Clock Gallery

The greater amount of treasures and artifacts in the Palace Museum makes its display more representative overall.

Though both museums display a broad spectrum of artifacts from the past, the Palace Museum in Beijing is especially strong in the exhibition of furniture and other imperial court artifacts. It also has many paintings, porcelain, jade, and bronze pieces, and timepieces.

6. The Forbidden City is more visited.

The Palace of Heavenly Purity is in the inner court where the last Emperor lived.

It is China's most popular single tourist attraction, and Bejing's Palace Museum is becoming increasingly popular. It is the the world's most visited museum with approximately 16.7 million visitors in 2017. This is about twice as many visitors as the next most visited museum, the Louvre in France.

In 2017, 4.4 million people visited Taipei's National Palace Museum; or approximately 1/4 of the number of visitors to the Forbidden City. It is the 13th most visited museum in the world.

7. The Forbidden City is easier to get to.

The National Palace Museum however is 9 km (6 miles) from the Taipei 101 and its World Trade Center Station. If you were to take the metro, you'd have to change to a taxi or bus to reach the station. You can take the Danshui line to Shilin Station such as bus 255 or 304 Chengde.

This is where having a China Highlight's driver comes in helpful. It takes about 17 minutes to drive the distance. It isn't as expensive as you might think, and they help you get around quicker and easier.

The National Palace Museum in Taipei ticket's are a little more expensive:

9. Touring in the Forbidden City is mainly outdoors.

Our tour guide shows his guests the secrets of the Forbidden City outdoors to avoid the crowds and noise.

The Imperial Palace site in Beijing is mainly outdoors, and the National Palace Museum in Taipei is indoors.

At the Forbidden City, much of a tour is spent walking between the buildings and down the walkways, and standing in the courts, gardens, and plazas.

At the National Palace Museum, unless you want to spend time in the park, you can follow the routes through the two exhibition buildings without hardly going outside.

The Forbidden City was a phenomenal feat in the 15th century, and so big you need a guide to really enjoy it.

The National Palace Museum is small enough that going from room to room and floor to floor is straightforward, and you can visit the successive rooms in 3 or 4 hours. You can also rent an audio device to listen to tour narration in English and other languages. You wouldn't really need a guide since there are English signs.

The Forbidden City is so large that a tour down the central axis takes about 3 or 4 hours, and if people want to see the east and west wings, their tour requires more time.

For Beijing's Palace Museum, an experienced tour guide would help you choose the best routes through the Forbidden City complex, can help you avoid the crowds, and show you things you might like more. They know how to navigate their way through the side buildings, while the tour groups go down the middle route. They can also help by picking good times to go and facilitating tickets so you won't need to wait.

For more expert advice, see How to Visit the Forbidden City — for Discerning Travelers.

Getting your Beijing tour details from our local expert.

Visitors to the Forbidden City are limited to 80,000 a day. It is advisable to book well in advance.

Beijing is big. To maximize your enjoyment, a private tour guide and driver, not to mention an expertly-designed itinerary, would be a great help. Suggested itineraries we can tailor for you:

Looking for a unique and personalized tour? Just tell us your interests and requirements, and we can design a tour for you.