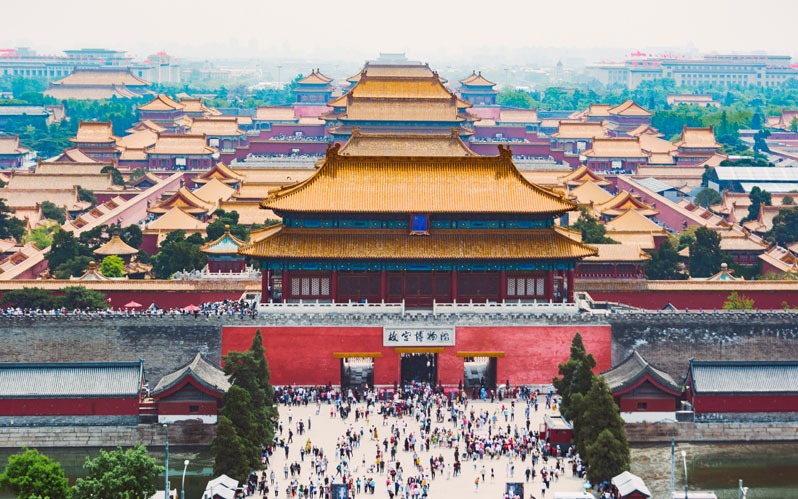 China's most glorious palace sits in the heart of the capital city of Beijing. As one of China's largest and most well-preserved heritage sites, the Forbidden City is a must-see for all visitors to China.

It is considered to be among the world's top 5 most important palaces of all time, and is China's most popular single-site tourist attraction. Read on for the top facts pertinent to tourists.

1. The Forbidden City is the world’s largest imperial palace.

It has more than 90 palace quarters and courtyards, 980 buildings and over 8,728 rooms. (A common myth states that there are 9,999.5 rooms, but it is not supported by survey evidence.)

You will be unable to appreciate all the palace quarters even you spend a full day there. Our insider’s guide will help you to plan your trip.

2. There are European and Arabic style buildings in the Forbidden City.

In the west of the Forbidden City, there is a peculiar building with a strong Arabic style. It is named Yude Hall (浴德堂), built in the Yuan Dynasty (1271–1368). A Persian architect designed the Arabic-style bathroom.

Later, in the Ming Dynasty (1368–1644), the Yongle Emperor – Zhu Di – built the Forbidden City on the site of the Yuan Dynasty’s capital city. A large number of the buildings were demolished but, fortunately, Yude Hall was preserved.

The other building is European-styled Lingzhao Xuan in Yanxi Palace. As Yanxi Palace suffered several fires, the Qing court wanted to build a fire-proof building with a pool at the bottom out of steel and stone (as most Chinese buildings were wooden, this employed some European architectural principles). However, due to the lack of funds and the revolutionary uprising at the end of the Qing Dynasty, it was stopped in the middle of construction.

3. The majestic Outer Court has no trees.

You can find no trees in the Outer Court.

There is no universal conclusion as to why there are no trees in the Outer Court. However, there are two main theories:

1. As the Outer Court was where solemn public ceremonies were held, and the emperors’ “supreme godly power” and imperial dignity were displayed, no trees were allowed, as they would overshadow or disrupt the majesty of the atmosphere.

2. A lack of vegetation would give assassins nowhere to hide, and clear lines of sight for defensive purposes.

4. The Forbidden City was home to 24 Chinese emperors.

Emperor Yongle, third of the Ming Dynasty, began its construction in 1406 and the complex was completed in 1420. 14 Ming emperors held power there until the Manchus took possession in 1644, and moved the capital to Shenyang for a few months.

The Qing Dynasty soon moved the capital back to Beijing and the Forbidden City. 10 Qing emperors ruled from there until the abdication of the last emperor in 1912, at the creation of the Republic of China.

5. The Forbidden City is a masterpiece of Chinese architecture.

The Forbidden City is the world's largest collection of well-preserved medieval wooden structures.

Apart from the magnitude of the complex, the detail of the architecture is also astounding. Every detail reflects features of traditional Chinese architecture and rich Chinese culture. For example:

6. The Palace Museum is one of the world's largest cultural museums.

Visitors can see a stunning array of ancient treasures and buildings while touring the complex. Ancient porcelain and jade, gardens, courtyards, and relics of historic significance for China and the world feature prominently. For more see The Top 10 Treasures in the Forbidden City.

7. Birds cannot land on the roofs of the Forbidden City.

When visiting the Forbidden City, you may notice that no birds are sitting on the roofs. This is because the roofs have a special design.

To keep the birds from landing on the roofs, so as to retain the cleanliness and magnificence of the Forbidden City, the smart craftsmen came up with an idea: they made the slope of each roof higher and made the roof spine wider than the width between a bird’s claws so that birds are unable to land on the roofs.

Also, the roofs are made of glazed tile. These tiles are very slippery, making it impossible for birds to land on them.

8. The colors of the Forbidden City are based on fengshui.

The main colors of the Forbidden City are red and yellow.

The roofs are yellow. In Chinese five elements philosophy, yellow belongs to the earth element, and its orientation in the five elements diagram represents the center, symbolizing the supremacy of the emperor (on Earth).

Some buildings were built in different colors because of their usage. For example, Wenyuan Pavilion, used for collecting books, has black tiles and black walls. Because black represents water, and water can overcome fire, it was seen as a way to preserve the collections through geomancy.

The Palace Museum is already large enough for you to spend over a day exploring. Can you believe that’s only the 60% that’s currently open to the public?

Closed areas include work areas, areas that haven’t been repaired, and areas used for special purposes such as storage of cultural relics.

10. The floor tiles of the Forbidden City are ‘gold bricks’.

The floor tiles in the halls are very valuable. They're not made of gold, but they cost the same! Thus, they were called ‘gold bricks’. It took 29 procedures to make a ‘gold brick’.

According to an artisan who makes such floor tiles now, it takes a year to copy production of the bricks in the ancient way, with a yield of only 20 percent usability.

Others are stray cats that have entered from outside the Forbidden City.

These cats will move around a fixed area, patrol every corner, and catch mice. They guard the Forbidden City with their prowess.

12. Part of the museum's former collection is in Taiwan.

In 1933, some national treasures in the Forbidden City were evacuated to preserve them from the threat of Japanese invasion. After the end of World War II, some of the collection was returned, but some is now housed in the National Palace Museum in Taipei.

13. Fire protection is crucial in the Forbidden City.

The Forbidden City is one of the largest and best-preserved ancient wooden complexes in the world. Once a fire breaks out, there will be irreparable consequences.

There is a special fire brigade dedicated to fire prevention in the Forbidden City. They check the fire equipment every day. One of their daily training exercises is to run along the city walls carrying fire hoses.

Because fire engines can't get through to most of the palaces, firemen need to remember the whole layout of the Forbidden City. In the event of a fire, they must run as fast as they can to put out the fire.

14. The Forbidden City is the China attraction with most international tourist visits.

Travel with us and our guide will help you to avoid the crowds.

Due to its cultural significance and unique beauty, the Forbidden City is extremely popular with both Chinese and foreign tourists. The palace museum boasts 14 million visitors annually, more than any single section of the Great Wall.

These overwhelming numbers often make for extensive lines, particularly on national holidays and weekends. The Chinese government is working hard to ensure the constant flow of visitors is well-regulated, and to prevent harm to the ancient buildings by the large crowds.

The palace is considered a must-see for everyone lucky enough to visit Beijing.

15. A Forbidden City trip is not complete without a visit to Jingshan Park.

You can enjoy a hilltop view of the whole complex.

If you want to see how large the Forbidden City is, pay a visit to nearby Jingshan Park, where you can enjoy a hilltop view of the whole complex.

Jingshan Park is a few minutes’ walk from the Forbidden City exit - a perfect end for your tour.

Travel with us to discover more things about the Forbidden City, such as the corner tower.

The Forbidden City is a complex attraction, rich in history and culture. It is advisable to travel with a knowledgeable guide, who can bring the background to life and help you to avoid the crowds.

Here are two recommended itineraries, including the Forbidden City, for your inspiration: