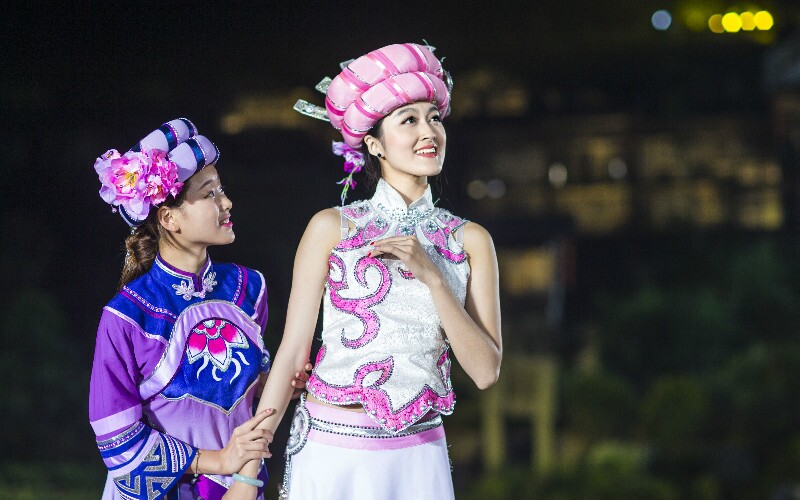 Millions of the more than 8 million Tujia are fortunate and blessed in that they live in some of China's best nature/scenic areas where they highly interest the tourists such as the famous Zhangjiaie National Park area in Hunan and Mount Wuling in Guizhou.

The beautiful nature and the great scenery of their homelands are a source of pride for the Tujia.

What also makes them interesting is their highly developed music, drama and arts that stem from the ancient past... so their arts are distinctive and strange, much different than Chinese art forms.

Where the Tujia Live in China

Fanjing Peak is the highest peak of the Wuling Mountain range.

The Tujia ethnic group (Chinese: 土家族 Tǔjiāzú) has more than 8 million people and are considered the 8th largest of China's 55 official minority classifications. Their main homeland is the Wuling Mountains, a famous and scenic mountain range, that is on the border of Guizhou Province, Hubei, Hunan, and Chongqing.

More than a million live around the famous Wulingyuan and Zhangjiajie National Park area of western Hunan that is also a part of this long mountain range.

Occupations: Besides the modern tourist industry that has created work and businesses for many, they traditionally made a living by agriculture and fishing.

The Zhangjiajie region is another of their homelands.

Language: Unlike the more isolated ethnic groups in more remote areas of China, the Tujia have for centuries lived in proximity with the culturally dominant Han people. The central regions of China such as Hubei and Hunan were settled by Han thousands of years ago. So the Tujia are generally acculturated. They can speak various Han Chinese dialects.

The original Tujia language is only spoken by about 100,000 Tujia now. These speakers live in a few areas such as the Xiangxi Tujia and Miao Autonomous Prefecture in Hunan. There, the live among about a million Tujia who speak Chinese. Tujia is a Tibeto-Burman language.

They don't have their own writing system. They use Chinese characters when they want to write something in the traditional language. Many can also speak Miao dialects because the two groups live in the same areas.

Chinese believe, according to their ancient records, that the ancestors of the Tujia were the Ba, a fairly warlike agglomeration of many tribes, who had a capital in the Yichang region of Hubei. The nearby Enshi Mountains was a mountain stronghold, and it is still a Tujia homeland called the Enshi Tujia and Miao Autonomous Prefecture.

The Ba country existed for about 1,000 until they made the fatal mistake of allying with the State of Qin to invade a third state in the year 316 BC. Once they conquered that country, the Qin promptly invaded the Ba and used their resources and manpower to build their army to conquer the rest of the states in the region and create the Qin Empire (221–206 BC).

Tujia in the Ming Empire

The Tujia allied with the Ming Dynasty (1368–1644) and had a prominent role in their society. The Tujia were excellent soldiers in the Ming army and aided them in their wars to take control of the territory of other ethnic groups and defend against invading Manchus and Mongolians from the north and Japanese pirates.

Tujia people traditionally eat rice and corn for the staple grains, and they sometimes eat wheat and sweet potatoes. They especially favor sour and spicy flavors, and they eat a lot of pickles. Usually, they have three meals a day.

During the busy farming season, when heavier labor is required, they will add another meal in the morning of snacks such as tangyuan (sweet dumplings) or mung bean paste. They consider that a meal like this is auspicious and will bring a bumper harvest.

Ciba is a special pastry. When guests come to visit during festivals, the host will serve ciba (rice cakes). It is a white rice patty like a pancake. They bake ciba until the surface is scorched. Then they add on honey or sugar. When they serve it to guests, their custom is to present it with both hands.

Men's clothing: Men typically wear a double-breasted short coat. A long band of cloth is usually tied around their waist. Trousers, usually green and blue, are wide with large and short bottoms. Their heads are wrapped with a green silk handkerchief or a white cloth nearly 2 meters long. They might wear straw sandals, cloth shoes or spiked shoes.

Women's clothing: Tujia women usually wear a blouse with an opening on the right side. The collar is usually embroidered with three laces, and the cuff and the place just right at the lower edge of the collar have three laces of small flowers. They used to wear skirts with many straight ruffles and later changed to big round trousers with three-colored laces at the bottom of the trousers.

Young women commonly dress in white coats inside and black short gowns outside because black is the color of crows and magpies. Tujia women use long green silk handkerchiefs that are about 3 meters long to wrap their heads and adorn themselves with silver combs and hairpins. They also like to wear earrings, bracelets made of gold, silver or jade.

Colors: For festive and important occasions, in many areas, both men and women like to wear red clothing. Darker colors are for work and everyday attire.

Tujia girls cry during their weddings. It is an important marriage custom.

Tujia girls will welcome their marriage day by crying. The bride usually starts to cry half a month before the wedding day; some even cry about one month. The shortest is about 3 or 5 days. Tujia people judge a girl's intelligence and virtue by how well she can cry while singing songs during her wedding.

The ten sisters in accompaniment tradition is a unique twist. The day before her wedding day, her parents will invite 9 unmarried girls in the neighborhood to sit with the bride around the mat and sing songs all night long.

As the girls sit and wait, the bride cries ten times. At each interval, the cook will put a dish out for them. When the bride finishes, ten dishes will be sitting there. After the ninth girl cries, the bride will have cried ten times, and the cook then collects the ten dishes one by one. That ends the ten sisters in accompaniment ceremony!

Wet mists such as this in Zhangjiajie are common in the mountains inhabited by Tujia.

Diaojiaolou style: The Tujia people like living in groups, and they prefer Diaojiaolou-style houses (houses raised up above the ground by pilings or wood pillars). Their houses are made of wood, with tiled roofs, up-turned eaves, and balconies with carved wooden handrails.

Many Tujia areas are in mountain regions with low temperatures and humid or often foggy weather. So the Diaojiaolou style has many merits. It is well-ventilated, protects against dampness and flooding, and also helps to keep out animals, snakes and bugs. The handrails are useful for hanging clothes and drying agricultural produce.

Sheba Festival: The Tujia people pay great attention to traditional festivals such as the Sheba Festival. The Sheba Festival is usually celebrated from the 3rd day until the 17th day of the first month on the Chinese calendar. This can be anytime from January to March on the Western calendar. But in some areas, it is celebrated in March or May. This festival is for worshipping the ancestors and for hoping for a prosperous year. It is also a good opportunity for the young people to make friends and find love.

On this occasion, people will wear their holiday best and bring sacrifices and wine. The young men might gird on weapons such as shotguns and broadswords and gather together. They set up bonfires, fire shots, sing, and dance. Their dance is unique. When dancing, all the dancers form a circle with a wizard leading at the front. They wave their arms freely in all directions to the music of drums. It is a very ancient dance expressing the origin, religion and lifestyle of the Tujia people.

Visiting the Tujia Regions with Us

Bring your camera for Tujia regions.

To visit their remote mountain areas, we suggest going with a private driver and guide. We recommend these tours that include a private guide who knows the areas you want to go to:

Private Drivers and Vehicles Are Useful

Many minority Tujia villages that are located high on mountains and in isolated valley floors in rugged mountain areas have retained more of their interesting traditional culture and lifestyles. But they are difficult places to access on your own.