The Yi ethnic group is better known to many as the Nuosuo or Nuosu, but they are called by many other names too. There are about 9.5 million members in China, so they are one of biggest of China's 55 official ethnic groups. They live among related ethnic groups in southwestern China, both in mountains and in river valleys, and they are mainly in Yunnan and Sichuan provinces.

They make terraced fields, love to make music, and are often accomplished musicians on both traditional and modern instruments. They also love dancing with almost acrobatic skill.

Their ancestral history (and present history too) is quite interesting since they founded a big empire called Nanzhao about 1,000 years ago.

Tourists like to visit their towns and tribal villages, eat their cuisine, and experience their vibrant ethnic culture.

Where the Yi Live in China

The Liangshan Yi Autonomous Prefecture in southern Sichuan Province has the largest concentration of Yi people. About 2 million Yi live there, and this one prefecture has almost all the Yi in Sichuan. If you want to visit Yi people and experience their traditional culture, this homeland area is one of the best places to go to.

They make both terraced fields and farms on the valley floors, and their culture seems strangely like that of the Thai. This is the homeland of the ruling caste within Yi society. At one time, the Yi from this area established a powerful kingdom called the Nanzhao Empire that later became the Dali Kingdom. 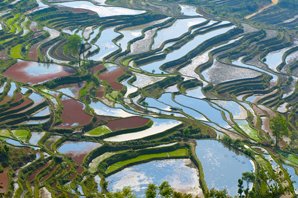 Some of the famed terraced fields in Yuanyang, a highly ethnic area near Vietnam, were built by Yi people. This can be considered another traditional Yi homeland, although it is much smaller than the Liangshan area.

They and the majority Hani people have lived somewhat together there for hundreds of years around the 1300 to 1600 meter level, but they don't mix much at the village level. They maintain separate villages. Of the 928 villages and small towns in Yuanyang county, 826 of them are inhabited by only one single ethnic group.

The Yuanyang Terraced Rice Fields are considered among the Best Terraced Fields in China and are on the par with the Yao and Zhuang Longsheng Terraced Fields near Guilin. They were included as a World Heritage listed area in 2013.

To visit this remote area, we suggest go with a private driver and guide since transport there is difficult. We recommend this tour that includes a private guide for interpretation: 6-Day Jianshui and Yuanyang Tour. 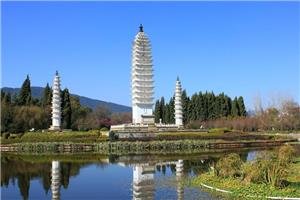 The Nanzhao and Dali Kingdom people, the ancestors of the Yi and Bai people, built these tall pagodas about 1,000 years ago.

The Yi have an interesting history because they once ruled a large area of southwestern China and established big and powerful empires there. The biggest of the Three Pagodas of Dali were built by them, and it was once their capital area.

It is believed that the Yi, Naxi and Bai are related. All three are descendants of the people of the Nanzhao and Dali Kingdoms. The Bai are the people now living around Dali, and the Naxi live further north. Even further north, a branch called the Mosuo live around Lugu Lake.

Chinese believe, according to their ancient records, that the ancestors of the Yi people were closely related with ancient Qiang people in West China. They left Tibet and moved down to the lower elevations of Yunnan and surrounding regions.

During the Tang Dynasty (618–907) era, some of the ancestors of the Yi around Dali succeeded in conquering 5 other related kingdoms to the north of them. They established the large and powerful Nanzhao Empire that defeated Tang armies in three wars, and they expanded their territory. They grew rich from the Tea Horse Road trade between Tibetans, Tang, and southern countries.

The Nanzhao are known for their excellent architecture as seen at the Three Pagodas in Dali. The empire existed for 165 years until the year 902. The society was stratified between a ruling class that most believe to have been from the Liangshan area and the lower class who many believe to be the ancestors of the Bai people.

The Bai rebelled and established the Kingdom of Dali in the former Nanzhao territory. The kingdom lasted for 316 until it was conquered by Kublai Khan who was the founder of the Yuan Dynasty (1279–1368). He incorporated it into his rapidly expanding empire.

The Ming Dynasty (1368–1644) wanted to gain more control of the Yi, and they replaced the local rulers with officials chosen by the Ming.

In most Yi areas, corn, buckwheat, and potatoes are the staple food. Meat including beef, pork, mutton, and chicken are eaten. The meat of dogs, horses, snakes, and frogs are forbidden. Sour and spicy are their favorite tastes.

Wine has an important role in the Yi people’s eating customs. They treat guests with wine, and drink wine on various special occasions festival. There is a custom called "Zhuanzhuanjiu" (drinking wine in turns). People pour the wine in a big bowl and sit in a circle. The oldest will take the first sip, wipe the bowl's edge, and then pass it one to the next one. People drink the wine in turn until it is finished.

Yi people living in northeast Yunnan Province have an interesting ancient tradition called Tiaocai (dancing while serving dishes). During celebrations, once the guests have taken their seats, the Tiaocai begins. The Tiaocai masters are able to carry the dishes on their heads. While carrying the dishes, they jump and swing to the rhythm of drums and suonas as they serve the dishes. It is amazing that not even a single drop of the soup is spilled during the process. Like the Bai, many Yi people wear white traditional clothing.

The Yi people’s traditional costumes vary in different regions. In the Mt. Liangshan area in Sichuan Province and in western Guizhou, men usually wear black jackets with tight sleeves and pleated trousers with wide bottoms. This might be a tradition handed down from the time when the people in that area were the Nanzhao ruling class who many believed to have worn black clothes. In some other areas, men wear tight-bottomed trousers and turbans.

Women wear embroidered jackets and pleated long skirts hemmed with multiple layers. They use turbans to wrap their hair. Middle-aged women wear black turbans, while young women prefer embroidered square kerchiefs. Their accessories include earrings, bracelets, rings, and so on. When going outdoors, men and women might wear a dark woolen cape with long tassels reaching to the knees. 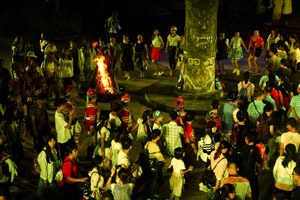 Torch Festival of the Yi

The Girls' Coming of Age Custom

In the Mt. Liangshan and Lesser Mt. Liangshan areas, a ceremony known as ‘Shalaluo’ in the Yi language has been observed for many generations. Shalaluo is an adult ceremony for the girls. It means girls taking off their girl’s skirt and putting on an adult one.

Before the ceremony, girls wear red-and-white dresses and wear a ponytail. After the ceremony, they will wear long skirts with blue and black colors, braid their hair into two braids, and begin to wear earrings. The ceremony is usually done when a girl reaches the age of 15 or 17.

On the day of the ceremony, the family will prepare food in the early morning. Only girls and female relatives are allowed to attend. Only when the ceremony is finished can the men take part in the banquet. After the ceremony, the young ladies can walk freely on the streets and go to the market. They are also allowed to date men and get married.

In some Yi areas in Yunnan Province, an ancient wedding custom is ‘kidnapping of the bride.’ It is done joyfully. Actually, the bride and groom, their parents, and relatives have all agreed to the marriage.

The groom’s family first sends betrothal gifts to the bride’s family. People are sent to the bride’s house at a prearranged time to snatch the bride and carry her home on horseback. The bride cries for help, and her family members will pretend to chase after and attack the kidnappers with water and stove ashes.

When the kidnappers take the bride to the groom’s house with black ashes on their faces, everybody laughs at the funny scene. As part of the ceremony, there will also be a frolic fight between the bride and groom on the wedding night.

The Yi people who inhabit mountainous areas live in adobe houses with flat roofs used as a veranda. There are usually 3 to 5 rooms. Right in the middle is the living room where the family members gather around and entertain visiting guests. On the left side near the wall, there is a hearth laid with 3 stones with a pot hanging above. This is called a Guozhuang (pot hanging over a hearth).

People use the hearth to prepare meals, stay warm, and to light the house. All the family members, young and old, sit around the hearth, talking and singing – this is a place to pass down their culture from generation to generation. 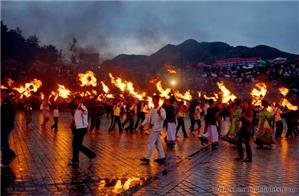 Torch Festival of the Yi

The Torch Festival is a traditional festival for the Yi ethnic group. It falls between the 24th day to the 26 day of the sixth lunar month, i.e. in July or August. The origin of the festival is related to their ancient ancestor's worship of fire that they believed to have the power to repel insects, ward off evils, and protect the growth of crops. In some villages, it is a tradition for the elderly to pass down their farming experience to the younger generation during the festival.

During the festival, big torches are erected in the village, and small torches are placed in front of each household. When the night falls, an altar is set up, and the flames are lit.

The Bimo (village shamen) will chant prayers, light up torches from the flame, and pass them to the villagers. Villagers, holding the flame, walk around the village, houses and the fields, and place the torches in the field corners to drive away evils. Inside the village, young men and women sing and dance around burning torches throughout the night.

Visiting the Yi Regions with Us

Many minority villages that are located high in cliffs, on hillsides, and in isolated valley floors in rugged mountain areas have retained their traditional cultures and lifestyles. Liangshan in Sichuan had for centuries remained isolated in the mountains, so the native people are still quite traditional. Some don't speak Mandarin well. But they are difficult places to access on your own.

So we suggest our private tour drivers and vehicles can be a big help. In the Yi areas, there are also other ethnic groups to see, so having a knowledgeable local guide and interpreter is important for helping you find the best places. We can take you to visit with families, arrange accommodation and provide transportation. Our expert guides can translate for you too.

Here are sample itineraries which you could use to see the Yi: A spectacular sunset over the Yuangyang Rice Terraces

According to where you want to go in Yi regions, we can modify these tours for you and design a trip you'll enjoy.

You can send us your ideas to modify the tours above. Inquiry is free, and receive a response within 24 hours.