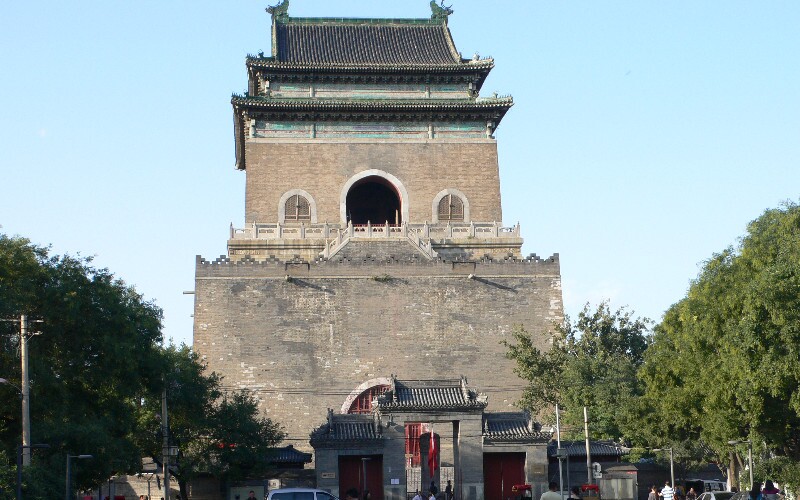 The bell tower is located on Di'anmen Outer Street, Dongcheng District of Beijing, where the northern end of the Beijing axle line is. It is to the north of Beijing Drum Tower, a distance of about 100 meters. It was first built in the ninth year of Zhiyuan (1272 AD) as the central court of the Wan Ning Temple in the Yuan Dynasty, but was destroyed in the war. It was rebuilt with the Drum Tower in Yongle in the 18th year (1420 AD) of the Ming Dynasty as a bell tower, but unfortunately it was destroyed again. It was reconstructed in Qianlong in the 10th year (1745 AD) of the Qing Dynasty and was finished two years later, having been built in a brick masonry structure to prevent a fire.

Covering an area of about 6,000 square meters, with 47.95 meters in height, a double-hipped roof structure was built at the mountain top. The tower is an ancient single building built in an all brick structure. There are doors set at the four sides of the foundation bed of its ground floor, and a 75-stair stone step inside connects the ground floor with the main building on the second floor. The main building is a three roomed construction, with a black glazed tile roof and green rim covering. There is a white marble Xumizuo bear on the base, four doors set in four directions, two carved stone windows standing on both sides of the doors, and stone guardrails surrounding it. The design emphasized the function of resonation, sound amplifying and sound transmission, which boasts a unique position in Chinese bell tower architectural history.

A huge copper bell is hanging at the top of Beijing Bell Tower called "the King of Ancient Bells". The sound it makes is bright, mellow and powerful, which can be heard from a long distance away. How was it cast? It is said that a long time ago, there was an iron bell in the tower, but it was not resonant enough. So the emperor called all the artisans together and ordered them to cast another magnificent bell. However, three years past and the artisans still hadn’t finished it. The emperor was so annoyed that he beheaded the supervising eunuch and ordered the artisans to finish the bell within 80 days, or they would all be beheaded.

Hua Yan (华严), a very famous artisan at that time, was in charge of this project. He tried so hard to cast the bell that he couldn't even eat or drink during the day or sleep at night. Fortunately, his beautiful 16-year-old daughter, Hua Xian (华仙), was smart and diligent, and she told her father that the furnace temperature was not high enough. Although Hua Yan thought it made sense, he could not figure out a solution, so Hua Xian volunteered to help her father.

On the last day of casting the bell, all the officials and artisans got together to finish the project, but the furnace temperature was still not high enough and nothing could be done to change it. At the last moment, Hua Xian suddenly burst out and jumped into the smelter. She was too fast to be stopped by her father, and only one of her embroidered shoes was left. For one instant, the fire blazed strongly and the copper water was boiling powerfully, so the old artisan, Hua Yan, fought back tears and ordered them to cast the bell. The copper bell was finally done with everyone's joint effort.

People called Hua Xian the "Bell Lady" to honor her foundry sacrifice for her father.

Right in the center of the bell tower is an octagonal bell-cot, with the huge copper bell cast in it and "Yongle Fine Day, Ming Dynasty" hanging on it. The bell is 7.02 meters in height, 3.4 meters in diameter and 63 tons in weight; it is the biggest and heaviest ancient bell in extant China, called "the King Bell". In ancient Beijing, the age with no tall buildings, the sound it made was so powerful that it could be heard from dozens of miles away. In the first place, an iron bell which was also cast in the Yongle era was hanging there, but the sound the iron made was not very good, so it was soon replaced by the copper one we see nowadays. The iron one still remains, leaning against a wall, and it has been part of the collection belonging to the Ancient Bell Museum attached to the Great Bell Temple for many years.

Ticket price: 15 yuan per adult, 8 yuan per student, a discount card for the elderly with half-price concession tickets.