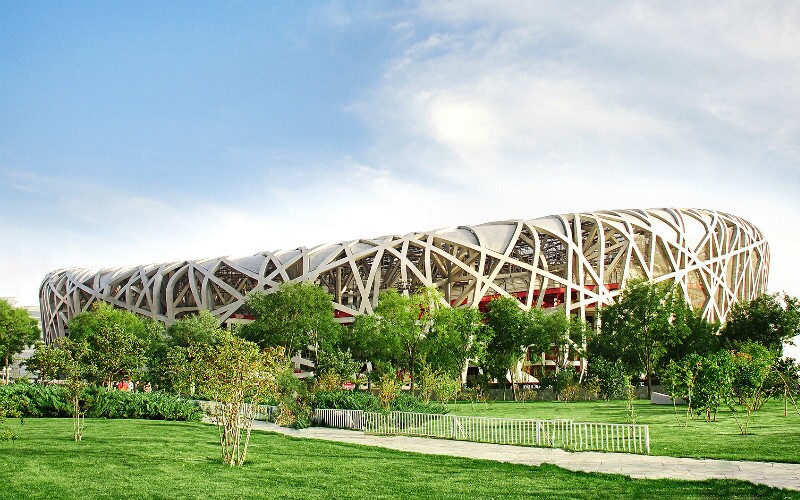 Beijing Olympic Park, also known as the Olympic Green, will be where the 2022 Winter Olympics takes place. It contains the main venues used during the 2008 Summer Olympic Games and Paralympic Games, such as the Bird’s Nest and the Water Cube.

Located at the north end of the central axis of Beijing, the Olympic Green has now become a comprehensive public activity center.

The Central Section - the Bird's Nest and the Water Cube

The Bird's Nest is Beijing's landmark and a legacy of the 2008 Summer Olympic Games. Its unique steel structure and shape make it "one of the key engineering marvels in the world today". The Water Cube got its name due to its huge cube structure with the shape of soap bubbles on it. At night, it turns into a blue cube under the lights.

In addition, the highest building in the Olympic Green – Linglong Tower – can be found in the area with a height of 132 meters (433 feet). These venues in the central section will be used during the 2022 Winter Olympics. When night falls, these buildings are extremely beautiful with colorful lights.

The forest park is divided into northern and southern areas by the 5th Ring Road. The southern area is mainly filled with artificial landscapes where Aohai Sea and the Yangshan Mountain have been built using traditional technologies relating to classical garden construction. The northern area, on the other hand, is closer to nature and has wilder features.

The green environment, wide area, and beautiful scenery make the Olympic Forest Park a nice place for people to stroll among the greenery and breathe the fresh air. It’s a great place for families to enjoy a wonderful weekend.

The Olympic Sports Center Stadium was built in July 1986 and put into use at the 11th Asian Games in 1990. Major venues in the sports center include the stadium, gymnasium, Yingdong Natatorium, and training fields for hockey, football, and tennis, among others. As a comprehensive sports center, it provides the public with a variety of sports and fitness programs.

Beijing Olympic Park: Venues for the 2022 Winter Olympics - Early Information You Should Know

There are 25 venues for the 2022 Winter Olympics, which are distributed in three clusters (one in Beijing, one in Yanqing, and one in Zhangjiakou). There are 12 venues in the Beijing cluster and six of them are in the Olympic Green.

There are 12 venues (five are competition venues and seven are non-competition venues) in the Beijing cluster, which are for ice sports events. Beijing Olympic Park will be the main area for the 2022 Winter Olympics.

In addition to the existing Bird's Nest, the Water Cube, Beijing National Indoor Stadium, and the China National Convention Center, a new Olympic village will be built in the south of the Olympic Sports Center Stadium and the National Speed Skating Oval in the west of the park.

Ceremony venue and three competition venues in the Olympic Green:

Located in Hebei Province, Zhangjiakou has the largest natural ski resort in North China and is known as “Asia’s Davos”. It is the main site for snow projects. Snowboarding, freestyle skiing, cross-country skiing, ski jumping, Nordic combined, the biathlon, and 50 other events will be held there. Eight venues, including five competition venues and three non-competition venues, are in this area.

Yanqing is a district in the northwest of Beijing. As a co-organizer of snow projects, alpine skiing, bobsleigh/skeleton, luge, and 20 other events will be held there. Five venues are in this cluster, including three new venues and two temporary venues.

Regional transport network: A high-speed railway linking Beijing, Yanqing, and Zhangjiakou will be built to ensure adequate transportation services are available for the 2022 Winter Olympics. The construction of the Beijing–Zhangjiakou intercity railway will be completed by the end of 2019. It will take about 20 minutes to travel by train from Beijing North Railway Station to Yanqing and 53 minutes to get to Zhangjiakou.

Beijing urban transportation: The subway network in Beijing will be improved. By 2020, Beijing will have 30 subway lines in operation with a total length of 1,177 kilometers. See the Beijing 2019 subway map. Moreover, a new airport – Beijing Daxing International Airport – in the south of Beijing will open in late 2019. It will take 40 minutes to get from the new airport to downtown Beijing by subway.

Current situation: The Olympic Green was built for the 2008 Summer Olympic Games. Now it has become a public place for recreation. The sports venues in the central and southern sections are open for citizens to exercise in. The forest park offers an ideal place for leisure and relaxation. The southwestern Olympic Village is now a residential area.

Features: It embodies the concepts of "science and technology, green and humanities", and is a new urban area integrating multiple functions for offices, businesses, hotels, culture, sports, conferences, and residences.

How to Get to Beijing Olympic Park

The Olympic Green area is one of the 11 best areas to stay in Beijing because of its green environment and convenient transportation. There are many kinds of hotels nearby, ranging from economy hotels to luxury hotels. If you have no idea about how to choose a hotel, we are willing to help you. Just tell us your requirements and preferences.

Travel to Beijing Olympic Park with Us

Beijing Olympic Park is a place where you can admire modern buildings and learn about the Olympic culture. Feel free to tell us your interests and requirements, and we will be happy to tailor-make a unique tour for you. You can look through our Beijing tours for some inspiration.