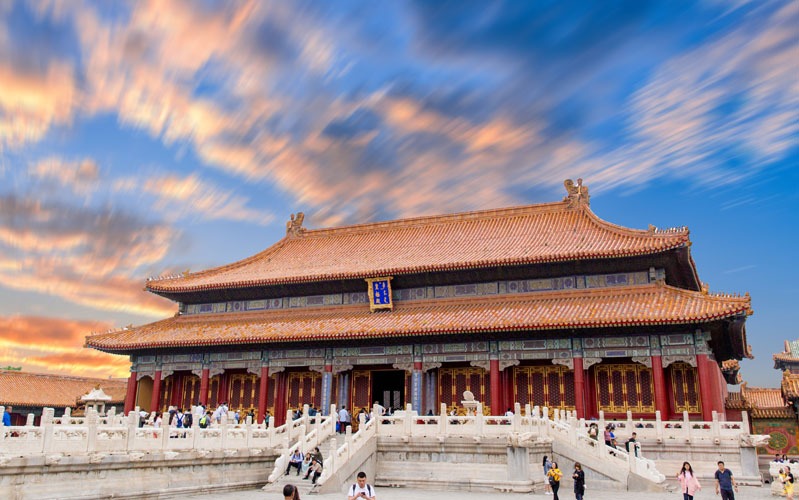 The Hall of Central Harmony, located between the Hall of Supreme Harmony and the Hall of Preserving Harmony, is one of the halls outside the Beijing Forbidden City and was the lounge that was used before the emperor held the daily ceremony.

History of The Hall of Central Harmony

The Hall of Central Harmony was built during the Yongle Eighteen Years (1420) and the early Ming people called it the "Hua Gai Temple". During the Jiajing Year in the Ming Dynasty, the hall caught fire and was then rebuilt; it was later renamed as the "Zhong Ji Temple".

Historical Function of The Hall of Central Harmony

During the Ming and Qing dynasties, the usage function of the Hall of Central Harmony was basically identical which served as the rest place for the emperor before he took part in grand celebrations in the Hall of Supreme Harmony.

Usually, the emperor would arrive at the Hall of Central Harmony to accept worship and statements from the officials holding the celebrations, then move to the Hall of Supreme Harmony to participate in the ceremony.

What's more, during the Temple of Agriculture sacrificial ceremony each spring, the emperor would first visit the Hall of Central Harmony to read the funeral oration written on the wood panels and check the farm tools that he used to plough with.

Before the participation of similar activities held in the Temple of Heaven, the Temple of Earth, the Altar of Land and Grain, as well as the Imperial Ancestral Temple, the emperor would also read the funeral oration.

Every seven years, the Qing Dynasty would modify the royal family genealogy. After that, there would be a rite in the Hall of Central Harmony in which the revised genealogy would be sent to the emperor for reviewing. The emperor would also read and draw up the memorial when the empress dowager was given the title.

Sometimes, the emperor would summon officials or provide officials with food there.

Seen from above, the Hall of Central Harmony is square and occupies 580 square meters. There are three rooms in the main side and also three rooms in each flank, totaling nine. It is surrounded by corridors which are paved with golden bricks.

The roof has a single eave featuring four pavilion roofs; yellow glazed tiles cover the whole roof. The center of this architecture is gold-plated bronze Baoding. There are twelve doors in the main side and the east, north and west sides have four doors.

There is a stone step before the door; there is one in the east and west side, but there are three in the north and south sides. Each stone step is carved with a picture of a cloud-dragon which can be trodden on. The wall between the steps, namely between the step and the adjacent slope, is slightly carved with a scroll grass pattern. Both sides of the doors are paved with sill plates, using green bricks. Above them are the window locks. Internally, the roof is decorated with a pattern of golden-dragons.

The height of the Hall of Central Harmony is 29 meters but it is the smallest one compared with the Hall of Supreme Harmony and the Hall of Preserving Harmony. On the bases of the three halls, there are outfalls in the shape of a dragon's head. The outfalls spurt water at the same time when it is raining, forming a scene of "thousands of dragons spouting water".

There is a throne in the center of the Hall of Central Harmony and two "jian yu" are placed beside the throne. "Jian yu" is a type of sedan for an emperor to take within the Forbidden City of Beijing.