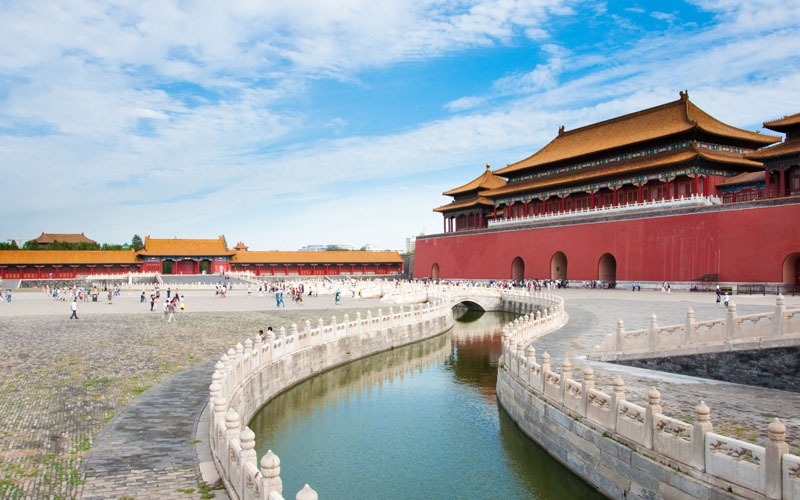 Palace Museum: Palaces, Exhibitions, How to Get, Opening Hours

Halls Open to Visitors in the Palace Museum

The splendid palaces themselves are important exhibits of the Palace Museum.

Based on historical books and archives, the Palace Museum has recreated the imperial furnishings and appearances of the Ming and Qing dynasties (1368–1912) in some of the palace halls. These halls include:

The Hall of Supreme Harmony was used for grand ceremonies such as enthronement ceremonies, and emperors’ weddings. It was rarely used.

In addition, the emperor would receive greetings from officials there on his birthday, New Year's Day, and the winter solstice.

It is the hall of the highest rank in the Palace Museum and the largest wooden hall in China.

In the center of the hall there is one of the Palace Museum's most luxurious dragon thrones.

During the Ming and Qing dynasties, the Hall of Central Harmony served basically the same function. It was used as a place of rest and preparation by the emperor before attending any large ceremony in the Hall of Supreme Harmony. The host of the ceremony would make his statements to the emperor there.

There are two golden unicorns on the left and right sides of the throne. These mythical beasts are said to be able to travel 29,0000 km (18,000 miles) a day and understand the languages of the four countries. They symbolize the intelligence and insightfulness of the emperor, and are used for burning sandalwood incense.

The Hall of Preserving Harmony was used differently in the Ming and Qing dynasties. The emperors of the Ming Dynasty used to change their clothes there before grand ceremonies.

In the Qing Dynasty, the emperors held banquets there. Later, it became the place where final imperial examinations (presided over by the emperor) were held.

Both internal and external eaves and the ceiling were painted colorfully with golden dragon patterns.

The scale of the Palace of Heavenly Purity is the most extensive in the Inner Court. Inner Court was the residence of the emperor and his family.

In the early Qing Dynasty (1644 onwards), it was still the imperial residence. However, starting from Emperor Yongzheng’s reign, the Palace of Heavenly Purity no longer served as a residence, but was a place to deal with routine affairs and to have audiences with ministers.

Palace of Longevity and Health

The Palace of Longevity and Health was built by Emperor Qianlong specially for his mother — Empress Dowager Chongqing. She lived there for 42 years.

Later, it became the palace for the Empress Dowager in the Qing Dynasty.

More than 60 cultural relics related to Empress Dowager Chongqing are on display inside the palace. The exhibition offers a glimpse into her life.

Later the Palace of Earthly Tranquility was used as a place of worship in the Qing Dynasty. The Manchus (Qing) had great respect for their gods. Their sacrificial ceremonies were very important to the Manchu people.

It was used by Emperor Qianlong to receive officials’ greetings after he stepped back and gave the throne to his son.

Qianlong once hosted a banquet there for the elderly over 90 years old.

The Palace of Gathered Elegance was the residence of concubines in the Ming and Qing dynasties. Empress Dowager Cixi once lived in the back hall of this palace, where she gave birth to Emperor Tongzhi.

Collections Displayed in the Palace Museum

The Palace Museum has many exhibitions in its palaces and halls to display precious cultural relics. These exhibitions mainly include:

The cultural relics displayed in the Sculpture Hall mainly consist of three categories: terracotta figures, stone and brick reliefs, and Buddhist statues. There are a total of 425 exhibits.

A representative collection of 1,000 ceramics from the Neolithic Period to the Republic of China era (1912–49) is displayed under 17 themes according to chronological order and function.

In this exhibition hall, you can learn about China’s profound ceramics history and culture as well as the characteristics and evolution of ceramics in different ages.

The Gallery of Clocks

The Gallery of Clocks

Clocks are a very special and precious category in the Palace Museum's collection.  The Palace Museum has more than 1,500 clocks and watches from home and abroad, dating from the 18th century to the early 20th century.

The exhibition has 48 pieces selected from the collection, among which there are masterpieces from Britain, France, and Switzerland, as well as fine works made in Beijing (for the Forbidden City) and Guangzhou.

Among the more than 1.8 million cultural relics in the Palace Museum's collection, there are many treasures made of precious materials and designed by famous craftsmen.

The Palace Museum has selected about 400 pieces for display. The works on display are crafted with gold, silver, jade, emeralds, pearls, and other gems and semi-precious stones.

You will learn about the history of medicine in the Qing court and the daily life of the Forbidden City’s residents.

The Palace Museum now has more than 6,200 pieces of furniture from the Ming and Qing dynasties, and more than 300 of them have been selected for exhibition.

The furniture exhibits are presented in recreated scenes of courtyards, scholarly studios, music rooms, and other thematic displays with state-of-the-art multimedia features and lighting.

How to Get to the Palace Museum

Meridian Gate is the mainly entrance for visitors. There are three ways to get to the Palace Museum:

Beijing Airports to the Palace Museum

Differences Between the Two Names

Actually, the Palace Museum and the Forbidden City refer to the same building complex.

Though the two names refer to the same imperial walled city, they have different meanings.

The name of the Forbidden City is the general name of the royal palaces of the Ming and Qing dynasties. This concept appeared in the Ming Dynasty (1368–1644), referring to the entire imperial palace complex built in 1420.

In the past, it was the residence of emperors. Ordinary people were not allowed in, hence they named it the Forbidden City.

Later, when the Qing Dynasty (1644–1912) ended and the last emperor abdicated, the Forbidden City was no longer home to the emperor. However, the palaces and many collections in the Forbidden City remained as a legacy that is rich in historical significance and value.

Hence, the Palace Museum was established and opened to the public in 1925 to protect, study, and exhibit the palace complex and the cultural relics stored in it.

How the “Forbidden City” Became the Palace Museum in 1925

The Forbidden City is the foundation of the Palace Museum.

In 1406, building of the Forbidden City started and was completed in 1420. In 1911, the Qing Dynasty, the last feudal monarchy in China, was overthrown.

In 1924, Puyi, the last emperor of the Qing Dynasty, was expelled from the Forbidden City. Then, a special committee was set up to deal with the property of the Qing royal family and their imperial palace.

So, they organized manpower to continue the sorting of cultural relics, held a variety of displays in the palaces, but also edited and published a variety of publications.

Finally, after a year of preparation, in 1925 the Palace Museum was established and opened to the public.

What Is the Correct Name for It?

It depends on the context. When talking historically, up to 1911, “the Forbidden City” is certainly a correct name (alongside imperial residence/palaces/fortress etc.).

In the 1912 to 1925 period, during Republican forces occupation, “former-emperor’s residence” was an accurate name as was “former Forbidden City”, as technically speaking it was no longer “forbidden” to the non-imperial-elite. “Palace Museum” is certainly incorrect as a name pre-1925 as the museum wasn’t established until then.

Now, both names are acceptable in general and will get you to the correct location when visiting.

The Chinese name 故宫 (Gùgōng /goo-gong/) and its translation 'Former Palace(s)' is a very accurate name. It’s the most widely used by Chinese people in a modern context.

Compared with “the Forbidden City”, the name “Palace Museum” is more formal (its official website uses “the Palace Museum”) and contains a meaning more related to tourism and modern times.

However, the name “Forbidden City” is more widely used (among English users) due to its mysterious appeal and historical usage.

During the Anti-Japanese War (1931–1945), the Palace Museum’s relics were moved to Nanjing to protect them from looting.

During the Chinese civil war after the Anti-Japanese War, the retreating Nationalists moved about 600,000 relics that were stored in Nanjing to Taiwan in 1948. Now, the articles are in the National Palace Museum in Taipei.

Tour the Palace Museum with Us

All our tours can be customized. We can create an ideal China trip for you based on your group size, time, budget, interests, preferences, and other requirements. Contact us.