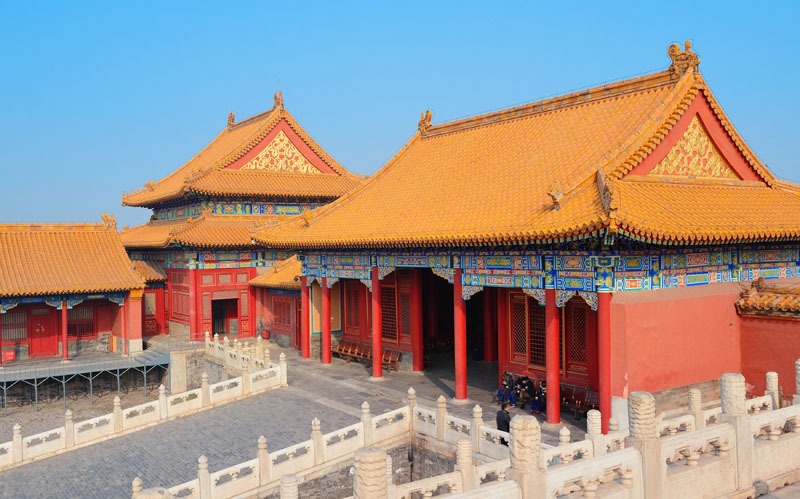 In the 13th year of Emperor Shunzhi's reign in the Qing Dynasty (1656 AD), according to the national Manchu customs, Palace of Earthly Tranquility was reconstructed from the model of Shamanistic worship construction (the architecture in the Shenyang Qing Imperial Palace).

Palace of Earthly Tranquility consists of nine chambers; the front door is not in the middle of the hall, but biased towards an easterly direction; its partition doors are made from wood and the windows are mullioned windows. The two eastern chambers are bridal rooms for the emperor's wedding, connected by aisles to the western part of the hall, where sacrificial items were prepared.

Hall of Terrestrial Tranquility is the emperor's wedding area.

At the east end of Palace of Earthly Tranquility are two chambers which were used for the emperor's wedding. The chambers' interior walls are painted with red lacquer, with Double Happiness palace lanterns hanging at the top of the chamber.

There are two doors in the wedding chamber, an east door and a west door, both of which are decorated by two gold-painted Chinese characters '喜' which means 'happiness' in English. It is a custom to paste double '喜' characters on the wedding doors. A king-size bed called the “dragon and phoenix happiness wedding bed” is located at the north-west corner of the chamber, with a hand-embroidered bed net above it and red quilts covering it.

After the two wedding days, the wedding chambers would be closed until the next emperor's wedding. In the Qing Dynasty, the weddings of Emperor Kangxi (康熙), Tongzhi (同治) and Guangxu (光绪) were all held in Palace of Earthly Tranquility.

The emperor's wedding was prodigiously extravagant. In the 11th year (1872 AD) of Emperor Tongzhi's reign, his wedding cost 11 million silver dollars (equal to 1.1 billion yuan); in the 15th year (1889 AD) of Guangxu's reign, although the country was in extreme poverty, his wedding still cost about 0.5 billion yuan. The wedding furnishings and decorations of Emperor Guangxu still remain now.

The west part of Palace of Earthly Tranquility has many kinds of worship facilities, which are used frequently. Under the window of the north wall, there are three cauldrons used for cooking meat and steaming cakes. The three rooms facing west, which are located in the north, west and south sides, have a circular connected hole. The westernmost room is a storage room.

In the Qing Dynasty, worship ceremonies were very common in the Forbidden City. Morning worship and evening worship occurred on ordinary days; big worship ceremonies on the 1st and 15th of every lunar month; and great sacrifices on New Year's Day, in mid-March and in early autumn. The emperor and the empress would attend the great sacrificial ceremony. Four pigs were killed in one day for a worship ceremony and, when the ceremony was over, pork would be divided on the spot, and people would eat it together via the connected hole.

What's more, on the festival of New Year's Day, the winter solstice, and Qianqiu (the Empress's birthday), every empress in the Qing Dynasty would have a rest in Palace of Earthly Tranquility with other imperial concubines after making an appearance before the Empress Dowager and the Emperor, and then accepted concubines would pay their respects to her in Jiaotai Hall.