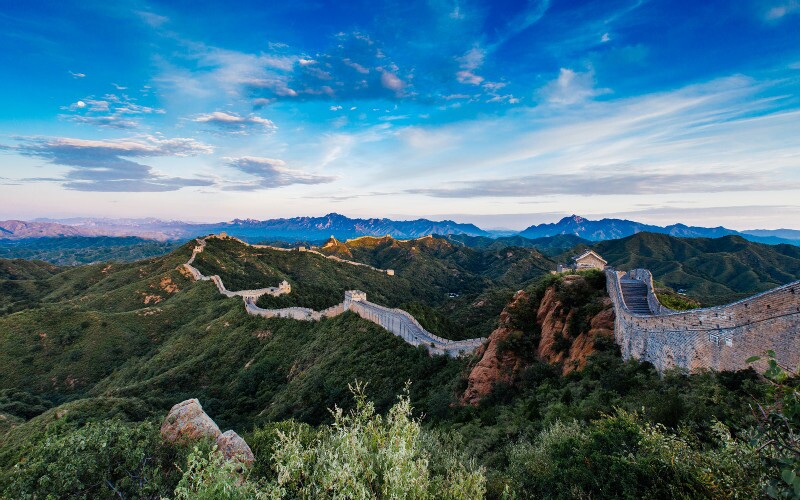 Every country has its landmark tourist attractions, and China is no exception. You should at least consider visiting all of these seven tourist landmarks: the Great Wall on Mao Loyalty Ridge, the Forbidden City, the Terracotta Army, the best giant panda base, 20-Yuan Hill on the Li River,  Mount Everest, and Dunhuang Mogao Caves.

The following list is the most famous Chinese landmarks, which are perfect places for your first-time China visit itinerary. If you are interested in them and plan to have a visit, you can consult us for details for free, and have us tailor-make a tour of China for you to include your favorite China highlights.

1. Dujiangyan Panda Base — the Best Place to See the Giant Pandas

A landmark in wildlife preservation. China's giant panda has become one of must-see attractions of China, alongside the Great Wall, the Terracotta Army, and the Li River. The best places to see the giant pandas are at the Dujiangyan Panda Base in Chengdu, where volunteer programs allowing close contact with the giant pandas.

The giant panda is an endangered animal. Due to deforestation and hunting (especially before the 1950s), the number of giant pandas was rapidly reduced. At present, this cuddly and lovable animal lives nowhere else in the world except China outside captivity, with only a little more than 1,000 in the world.

As the fifth series of Chinese bank notes was issued, the Li River scenery printed on the back of the 20-yuan bill became a landmark of China. This image was taken at a site near Xingping Dock in Yangshuo. It is a part of theLi River cruise route. Your cruise ship will slow down there, so that you can feast your eyes on the landmark.

Renowned for its karst landforms, limestone cones, cylinders, and hills, the Li River has inspired countless Chinese poets and artists, and has been repeatedly depicted on the country's newspapers and magazines.

Taking a cruise along the Li River and appreciating the graceful landscapes, cycling in the Yangshuo countryside with its idyllic scenery, and taking a bamboo raft to float on the green Yulong River (a branch of the Li River) will make your Guilin journey rejuvenating and memorable.

You could take a cruise to see the picturesque Li River, or go kayaking to enjoy the cool water and appreciate the karst scenery along the Li River.

The Great Wall, a star attraction in China, is a symbol of China, together with Tiananmen Square and the five stars or the Communist flag.

If you are planning to visit the Great Wall of China, the best section is at Mutianyu, a fully-restored with elegant scenery, less crowds, and good walking conditions. The most challenging section (very steep) is near the "Mao's Loyalty Ridge", taking about 30 minutes to climb the steps.

The landmark of Mutianyu's Great Wall section is the hill with a large stone inscription saying “忠于毛主席” (Be loyal to Chairman Mao), which was made in the Cultural Revolution period (1966-1976). Standing on the ridge, you can have a bird's eye view of the Great Wall in this area.

4. The Forbidden City — the Largest Imperial Palace in the World

The Forbidden City (or the Palace Museum) is one of the must-visit attractions for travelers to China. It used to be an imperial palace in the Ming (1368-1644) and Qing (1644-1911) dynasties. It has housed 24 emperors. Today, the palace is a large museum, housing thousands of historical relics.

The layout of this palace is strictly according to Chinese fengshui theory. China's best-preserved imperial palace is the world's largest ancient palatial structure (720,000 square meters, and more than 9,000 halls), and the essence and culmination of traditional Chinese architectural accomplishment.

You cloud visit the 12 selected places in the complex to discover the deep secrets of the royal families, while other group tours only visit six spots briefly. Listen to the interesting stories of eight famous figures in the Forbidden City.

Buried in 210 BC with the first Emperor of the Qin Dynasty, this breathtaking underground army of Xi'an is another star attraction in China. The Terracotta Warriors Museum, with three pits, covers an area of 22,780 square meters. Over 8,000 terracotta soldiers and horses, and more than 10,000 bronze weapons were unearthed in these three pits.

The Terracotta Warriors is First Emperor Qin's Buried Battalions, about one kilometer from his mausoleum. The life-sized terracotta army is exhibited in the museum built at the site of archeological excavation. An interesting fact is that all the terracotta soldiers were made to face east towards Emperor Qin's enemies.

In addition to visiting and learning about these terracotta warriors, you could make your own warriors at a cave dwelling where there are only a few craftsmen left who continue to work in a traditional way.

Click to see How to Visit the Terracotta Army — an Insider's Guide.

In the Mount Qomolangma area, there are over 40 mountains more than 7,000 meters. The magnificent scenery from the highest point of land (about 8,844 meters high), and the sense of achievement has attracted hundreds of mountaineers to conquer the summit since the first success in reaching the peak in 1953.

The best time for Everest mountaineering is during the period from early September to late October, before the windy season (from November to February).  Read more about Trekking to the Everest Base Camp

All our tours can be customized. Contact us to create a trip according to your group size, time, budget, interests, and other requirements.

7. The Mogao Caves in Dunhuang

The Mogao Caves in Dunhuang

“In the West there is the Louvre; in the East there are the Mogao Caves.”

The Mogao Caves are famous for their exquisite murals and Buddhist statues. The Mogao Caves were included in UNESCO’s world cultural heritage list in 1987.

Artists from different periods of the Middle Ages left their work there. All kinds of works spanning over one thousand years complement each other.

Standing out in the desert, the Mogao Caves are like a glittering pearl that adorns the Silk Road.

In addtion to visit these wonderful caves, you could get some hands-on archaeological experience. We can take you to the Dunhuang Research Academy. There, you can linger over copies of murals created by masters and can copy a sample mural on a mud slab with your own hands under the guidance of the teacher.

There are some bestsellers including these landmarks:

There are many options for return trips to China, you can get inspirations from these top places provided on this page, or tell your interests to our travel advisor, and they will help you tailor make a China trip!