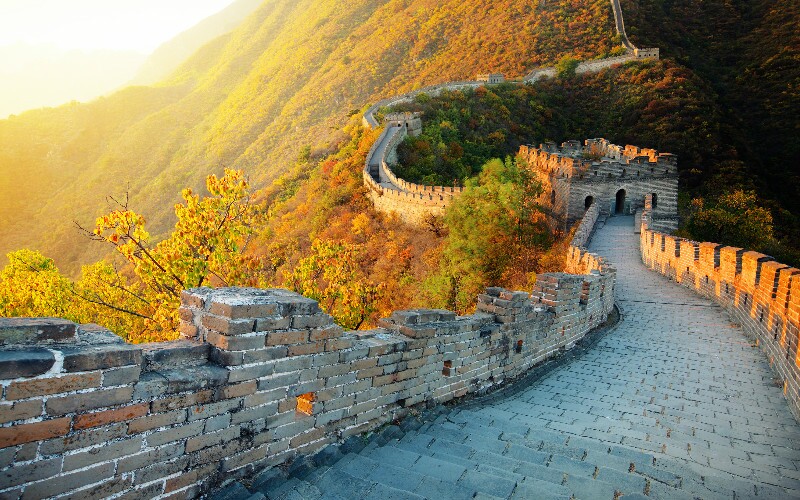 China is the world's third biggest country by territory, and it has the largest population. It’s home to one of the oldest civilizations on earth with a unique and sophisticated culture.

It has developed at record speed to become the second largest economy in the world, and it holds innumerable attractions for tourists to explore.

Below, updated in November 2021, you can read about the top facts that you must know about this fascinating country, grouped into the following categories:

1. China has the largest population in the world.

3. There are about 35 million people who live in caves in China!

Most of them live in Shaanxi Province. It is a Chinese architectural style dating back to the stone age. People in some northern China areas appreciate underground and cave dwellings since they are cheaper to build, easier to warm in the winter, and cool in the summer.

4. Chinese is the only surviving pictographic writing system.

Chinese is often believed to be the world’s most spoken and most difficult-to-learn first language. Mandarin is the official Chinese language and is taught in schools all over China. But there are many dialects and even other Chinese languages...

Some regions speak a dialect of Mandarin; some regions have their own distinct languages. Cantonese, for example, is spoken in Guangdong, Guangxi, Hong Kong, and Macau. People around Shanghai, Zhejiang, and Jiangsu speak Wu. These languages can be very different from Mandarin.

5. China has a variety of beliefs.

China has no unifying religion, but people hold a wide range of beliefs, mainly ranging from atheism to ancestor worship to one of China’s ‘Four Major Religions’: Buddhism, Taoism, Islam, or Christianity. Read more about China's Religions.

6. China has a fast-booming economy.

China was the world’s fastest-growing economy for over 30 years (around 10% per year for three decades). It is now the world's second largest economy, it’s 2020 GDP being 15.8 trillion USD. China is known as ‘the factory of the world”. It is the world's largest producer of concrete, steel, fertilizer, clothing, and toys.

7. China has 18 cities with a population of over 10 million.

9. China’s railway lines can loop around the world thrice.

The Hong Kong–Zhuhai–Macau Bridge is the longest sea-crossing bridge in the world. The total length of the bridge is 55 kilometers (34 miles), including a 6.7-kilometer (4.2-mile) tunnel.

11. Confucianism was a leading philosophy in ancient China.

Existing for more than 2,500 years, Confucianism is an ancient belief system, which had an influential impact on Chinese culture. It focuses on inner virtue, morality, and respect for the community and nature. Its founder, Confucius, was a great philosopher and teacher, who lived from 551 to 479 BCE. His teaching, thoughts, good behavior, and ethics were written down by his students in a book called “Lun Yu” or “The Analects of Confucius”.

In Chinese culture, colors have lucky and unlucky meanings. Red is the favorite of the Chinese people. It means good luck and happiness. White is related to death and funerals. Yellow is regarded as the royal color in ancient China.

15. There are 12 animals in the Chinese zodiac.

The Chinese zodiac is shengxiao (literally ‘born resembling’) in Chinese. It features 12 animals in a certain order: Rat, Ox, Tiger, Rabbit, Dragon, Snake, Horse, Goat, Monkey, Rooster, Dog, and Pig. The 12 animals are in a cycle, which recurs every 12 lunar years. People born in a certain zodiac animal year are believed to share certain common personality traits and destinies.

16. There are more than 400 substyles of Chinese Kung Fu.

Chinese kung fu is also known as martial arts or wushu. It is an important part of Chinese culture. Chinese kung fu is a large system of theory and practice. It combines techniques of self-defense and keeping healthy. There are more than 400 substyles of kung fu. The most popular kung fu styles include taijiquan (tai chi), qigong, Shaolin kung fu.

According to Chinese legend, tea was discovered by Emperor Shen Nong in 2737 BC. Tea was one of the most important products introduced to the West via the Silk Road. People exchanged tea for jewels, dried herbs, and spices. Tea played an important role in the cultural exchange between the West and China.

The Tea-Horse Road was a trade route between Tibet and Sichuan/Yunnan. Drinking tea, especially green tea has a long history. China’s tea culture is associated with literature, the arts, and philosophy.

Offering a cup of tea to older generations by the younger generations is a way to respect one’s elders in China. Couples customarily serve tea to their parents and elder family members in a Chinese marriage ceremony. Drinking tea before or after dinner is a traditional practice to socialize with friends or relatives in China. It is common to see a group of Chinese people sitting together to drink tea in their spare time. Nowadays, many Chinese restaurants offer tea before a meal begins.

There are many styles of cooking in China. The most popular cooking styles in China are know as the ‘Eight Great Cuisines’, named according to different regions of China. The features of the 8 cuisines are as follows:

Fujian cuisine: lighter, with a mild sweet-and-sour taste, using ingredients from the sea and the mountains

Hunan cuisine: quite spicy, with a hot and sour taste, favoring sautéing, stir-frying, steaming, and smoking

19. Vegetables and rice are the most common ingredients in Chinese food.

20. China’s earliest chopsticks were used for cooking, not for eating.

21. People in Beijing eat scorpions on a stick.

The scorpions sold on the streets in Beijing are grabbed live, dipped in boiling oil for a second or so and skewered on a stick.

You can find a lot of other insects, mollusks, and tasty sea things for sale on Beijing's touristy pedestrian streets.

Chinese people eat certain foods during the Chinese New Year period for their symbolic meanings. The most common Chinese New Year foods include dumplings (jiaozi), spring rolls, fish, tangyuan, niangao (sticky rice cake), and so on. For example, in Chinese, "fish" (鱼 Yú /yoo/) sounds like 'surplus'. Chinese people always like to have a surplus at the end of the year.

Chinese dumplings can be made to look like Chinese silver ingots. Legend has it that the more dumplings you eat during the New Year celebrations, the more money you can make in the new year. You might like to read more about Chinese New Year food.

23. China is one of “the Four Ancient Civilizations”.

China is among the most ancient civilizations along with the Babylonian, Mayan, and Egyptian civilizations. There has been written documentation of China's history for more than 3,000 years.

24. Pre-modern China gave rise to its “Four Great Inventions” as well as “football” and kites.

Chinese people invented paper, printing, the compass, and gunpowder. The Four Great Inventions have made important contributions to human civilization. Besides the four great inventions, Chinese people also invented many other things, such as Chinese football (cuju 蹴鞠), kites, silk, and porcelain.

25. The first emperor made a huge army of clay men — the Terracotta Warriors

First Emperor Qin Shihuang was a very powerful emperor and at a huge expense built a necropolis (a city of the dead) for himself to rule in the afterlife.

Just a fraction of it has been uncovered — the Terracotta Army Museum. You can see thousands of life-size clay soldiers and officials, weapons, and even animals he made for his fantasy kingdom there.

26. There were about 600 emperors over the history of China.

Since the first emperor Qin Shihuang founded the Qin Dynasty (221–206 BC), there were 150+ emperors who ruled in succession over China or parts thereof. If all emperors claiming legitimacy from ancient times were counted there would be over 600.

27. The Tang Dynasty is considered by some to have been China’s greatest.

The Tang Dynasty (618–907) was one of the most prosperous and powerful dynasties in the history of China. Tang poetry and paintings are well known to all in China. China towns all over the world are still called ‘Tang people’s streets’ in Chinese.

If you are interested in natural sights, you are recommended to visit Guilin, Guizhou, and Yunnan in South China. Tibet is considered a sacred area, where you can discover the world’s highest plateau. Inner Mongolia has the best grasslands.

29. China has the most international borders.

You may want to find out more about China's neighbors and the influence they have had on China and vice versa.

30. The Yangtze River is the longest river in China.

31. China’s temperature and rainfall vary greatly from north to south.

In China, the north is colder and drier than the south, and the west is drier than the east. Winter temperatures in Northeast China can reach -40°C (-40°F), while summer in the south can be 40°C (104°F). Rainfall varies from a few millimeters per year in the Taklamakan Desert to over 3 meters (118+ inches) a year in the southeast. Read more about China Weather.

32. Generally, the best time to visit China is autumn.

China is a big country with a rich variety of weather-dependent and non-weather-dependent travel options. Visitors can travel to different optimal places in China all year round. But, to visit the most popular places in comfortable weather, you’d best go in fall. The top travel destinations in China include Beijing, Shanghai, Xi’an, and Guilin. Read more about best time to visit China.

33. There are 56 world heritage sites in China.

If you want to visit World Heritage sites, then China should be your travel destination, as it has the biggest variety. There are 56 World Heritage sites in China (second only to Italy with 58). The most famous sites include the Great Wall of China, Forbidden City, Summer Palace, Terracotta Army, Mogao Grottoes, Danxia Landforms, and Fujian Tulou.

34. China is a destination full of different sights and experiences.

China is rich in historical, cultural, and natural wonders. The best destinations to discover Chinese culture and history include Beijing, Shanghai, Xi’an. In China, you can experience the culture and lifestyles of ethnic groups in Yunnan, Xinjiang, Tibet, and Guizhou, among others. For a variety of natural wonders, hike through Tiger Leaping Gorge in Yunnan, have fun on the beaches of Hainan, see the Ice and Snow World of Harbin, or explore the highest mountain in Tibet.

Plan with China Highlights to Make Your First Great Trip to China!

10,000+ people use our services annually. View our top 10 China tours, or see our top recommendations for a first tour:

For a unique and personalised experience of Chinese culture, you can also contact us for a customized tour.