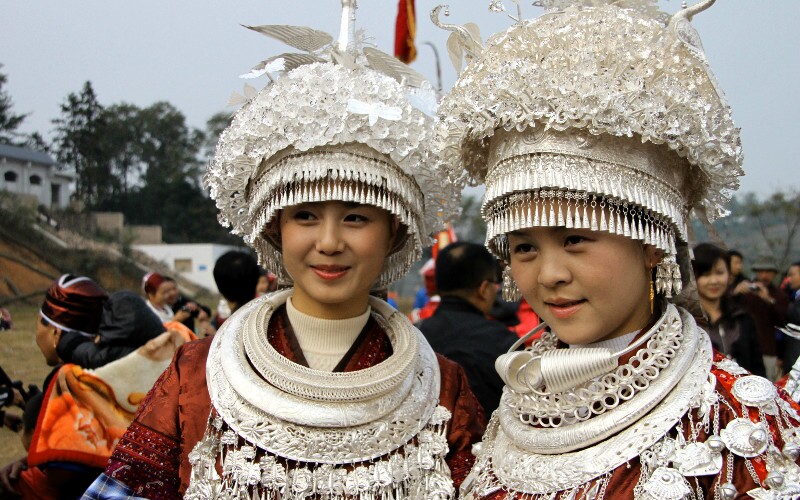 Festivals seem to fill the yearly calendar. The following are some of the most important ethnic festivals in China. We've also designed several Chinese Festivals Tours that take you to celebrate the festivals as local people do. Check out China's Festivals and Events, or Contact us for a customized tour.

It is the most important festival for the Miao people. It marks the beginning of a new year. Actually the exact dates vary each year and in different regions, and are only disclosed one or two months in advance. The celebration in Leishan County, Kaili City of Guizhou Province is the grandest one. During the event tourists can enjoy watching enchanting Miao customs come alive through various kinds of ethnic activities. These include the festival parade that features Miao girls and women in traditional Miao dress and silver accessories that can only be seen on festivals, the traditional music of the Lusheng (a kind of musical instrument made of bamboo), worshipping, bullfighting, horseracing, and of course, lots of singing and dancing.

2. Shoton Festival of the Tibetan People

Shoton Festival is one of the most popular traditional festivals in Tibet. It celebrates eating yogurt, the Tibetan monks who end their season of meditation, the watching of Tibetan dramatic operas, and Tibetan Buddhism. It is held annually in the month of August, or late in the sixth month or early in the seventh month of the Tibetan calendar. The festival is a great occasion for both Tibetans and tourists. On the first day of the festival, the Thangka is scheduled to be unveiled at the Drepung Monastery. Then the celebrations will begin at Norbulingka. The residents of Lhasa will gather in the park and celebrate by eating yoghurt and watching the operas.

The Tibetan New year, also known as Losar, is the most important festival in the Tibetan calendar. It is celebrated over a period of 2 weeks. It is marked with ancient ceremonies that represents the struggle between good and evil, by chanting, and by passing fire torches through the crowds. A certain amount of levity is provided by events such as the dance of the deer and the amusing battles between the King and his various ministers. On New Year's Day, Tibetans get up early, and put on new clothes after having taken a bath. They then worship the gods by placing offerings in the front of their household shrines. In addition, this day is for family members to exchange gifts. Families also have a reunion dinner, which usually consists of a kind of cake called Kapse and an alcoholic drink called chang, which is consumed to keep warm.

It is the most important festival observed by the Dai ethnic people of Xishuangbanna Prefecture, and, similar to neighboring Thailand's Songkran Festival, it involves three days of celebrations that include sincere, yet light-hearted religious rituals that invariably end in merrymaking, where everyone ends up getting splashed, sprayed or doused with water. The Water Splashing ceremony is more than just good-natured fun; it also contains a religious element: water is regarded by the Dai as a symbol, firstly, of religious purity, but also of goodwill among people. Therefore, splashing a fellow human being with water during the Water Splashing Festival, whether a close neighbor or a fellow villager, or even a stranger, is an expression of the desire for good luck and prosperity to that person.

It is regard ed as the oldest Asian Valentine's Day. A few days before the Festival, Miao girls collect special wild flowers and leaves in the mountains to produce natural color to dye the glutinous rice, known as "sisters' rice". At festival time, the Miao girls, all dressed up in their holiday best with startling silver headdresses, crowns, and neck rinks gather together by the river banks to prepare their "sisters' rice". The rice is dyed blue, pink, yellow, and white to represent spring, summer, autumn and winter respectively. When the young men arrive they begin to single out the women they hope to marry someday and begin to sing for them. The young women respond to their songs by giving them a drink of rice wine and the sisters' rice wrapped in handkerchiefs with different symbols on them.

The Naadam Grassland festival is a magnificent event featuring traditional Mongolian mass recreational and sports activities. Naadam means games in Mongolian. It is held between summer and autumn from July to August when the flowers are blooming, the grass is green, and the cattle and sheep are well-fed. Tourists can participate in and watch horseracing, wrestling and archery, and enjoy the singing and dancing performed by Mongolian artists, or try local Mongolian traditional foods.

It is popular throughout Guizhou, Yunnan, and Sichuan Provinces. The Lusheng Festival in Kaili, Guizhou is the most famous and grandest of the bunch. The festival features a lot of Miao ethnic activities, such as singing, bullfighting, horseracing, and dancing to the rhythm of the Lusheng. All the Miao people come together from different villages. The girls dress up in their best traditional costume and silver headdresses, while the boys carry their lusheng and head to the Lusheng Stadium to celebrate the festival. They circle in rings as the girls dance to the rhythm of the music provided by the boys. The ceremony is performed to bring hope for a favorable harvest in the coming year alongside good health. It is also a chance for the youth to express their admiration and love towards one another.