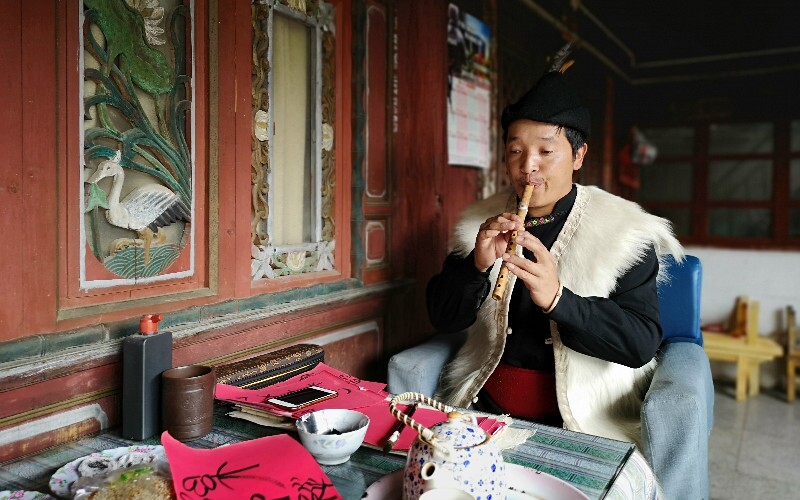 The Naxi minority people mainly live in Yunnan Province around the Lijiang area.

The Naxi (or Nakhi) live around the Lijiang area of Yunnan Province and some other areas. It is their traditional homeland area where they built towns and profited from the Tea Horse Road trade to Tibet.

The unusual architecture and canal systems of several of these towns were part of what prompted the UN to list these towns as World Heritage sites in 1997.

The Naxi culture, their buildings, crafts, arts, and language, and the dramatically beautiful mountains and scenery helped to make Lijiang a favorite tourist city in China decades ago.

Where the Naxi Live in China

The metropolitan region of the city of Lijiang in Yunnan Province has about 1.4 million people. Most of the 330,00 Naxi live in this region in the mostly Han Chinese city. Travelers to Lijiang are very likely to see Naxi people in their traditional dresses. Traditional Naxi performances are arranged on special occasion in the Ancient Town of Lijiang.

The Location of the Mosuo People

Lugu Lake is the homeland of the Mosuo.

Note that the Mosuo people are officially designated by the goverment as part of the Naxi ethnic group. About 50,000 of them live in the Lugu Lake area about 120 kilometers northeast of Lijiang. It is a high altitude area about 2,685 meters (8,809 feet) high. In the recent past, the area was quite isolated. But modern roads has made this unique culture quite easily accessible most of the year. Now it is a favorite tourist destination.

The language, religion and culture of the Mosuo and Naxi are quite different. This maybe be because about 1,000 years ago, the ancestors of both peoples came from Tibet to the area. But centuries of separation produced different cultures. Another group in Yunnan, the Naheng, are also thought to be related to the Mosuo. Read more about the Mosuo history in the Naxi History section below.

The Naxi Language and Pictographic Writing

However, they still to some extent use an older hieroglyphic script that is called Dongba. This written language is part of what makes the Naxi culture interesting to tourists since they are the only people who still use hieroglyphics in the world. However, only a handful of people, maybe 8, can still read Dongba texts. They also have a third kind of script called the Geba script. It is a syllabic component of Naxi used to transcribe mantras and to annotate Dongba pictographs. Naxi sell objects and texts with Dongba inscriptions as souvenirs.

The History of the Naxi

The Naxi and their ethnic relatives to the south, the Bai, are the descendants of the Dali Kingdom (937–1253) that controlled the area. This kingdom originated from an ancient powerful kingdom called the Nanzhao Empire (738–937).

The early ancestors of the Nanzhao were Qiang people who had moved eastwards from western China and down from the Himalayas to settle in the lowlands around Yunnan between the 1st and the 8th centuries. It is believed that the Qiang people of Sichuan's mountains are descended from those ancient Qiang also.

The Yi tribes led the Nanzhao Empire. Then the Bai led the Kingdom of Dali, and in the Lijiang area, the Naxi participated in trade and were merchants since one of the main Tea Horse Road routes went through Lijiang. Around this time, about 1000 years ago, a Tibetan tribe migrated to the Lijiang area. Many think that both the Naxi and Mosuo are mainly descended from this tribe.

Then Kublai Khan, the founder of the Yuan Dynasty (1279–1368), invaded. After that, the area has been ruled successively by Mongols, Han Chinese, and Manchu people. The Bai people living around Dali, the Naxi, and the Mosuo who live in high mountains northeast of Lijiang are all descended from the Dali Kingdom, and they share some traditions and customs.

There is some debate over whether the people calling themselves Mosuo who live in the mountains northeast of Lijiang around Lugu Lake are really Naxi themselves. The Mosuo, in contrast to the Naxi, have a more matriarchal culture. It should be noted that before 1700 when Han and Manchu people took more control in the Lijiang area, the Naxi too had a more matriarchal culture.

The Naxi, like most people in every moderately developed country today, can enjoy "three square meals" per day. The Naxi typically prepare their dishes using both local ingredients and exotic specialty ingredients.

Whether living on the flatlands or in mountainous districts, the Naxi people have ample access to a variety of vegetables including potatoes, turnips and beans all year.

Of all the renowned traditional Naxi dishes, mushrooms with meat stuffing, usually served in connection with a sacrificial ceremony, is the most popular. The Naxi are also fond of buttered tea in the morning and green tea after other meals. In general, spicy, tangy, as well as sweet foods are Naxi favorites.

The Naxi people live in log cabins. These log cabins are wooden structures made without using any nails. The interior of a Naxi house is marked by "lanes." Each "lane" is made up of three rooms joined by a corridor with doors at every entrance, both internal and external, in order to keep the house tidy and rooms quiet. Most of the houses are built in two stories with a courtyard in the center.

The courtyard is large. It provides lots of fresh air to the rooms and sunshine to the courtyard. A Naxi house is of moderate height. The main house usually faces the south or the east. The belief is that this will trap the good luck that arrives from these quarters and provide the house's occupants with a bright and promising future.

The whole edifice is compactly constructed, well designed, and often elaborately adorned. The wooden doors of each house are made by hand, now often by Bai craftsmen, and they are beautifully carved with intricate designs of plants and animals. The Naxi love plants, so their courtyards are decorated with all kinds of trees and flowers such as plum trees, osmanthus trees, chrysanthemum trees, and orchids.

The male costume is similar to the Han Chinese gown replete with Mandarin-style jacket with buttons.

However, the female costume has its own unique features. It consists of a long, unlined gown and a colorful, embroidered cape. The gown is slightly longer in back and reaches to the calf of the leg, and it reaches the knee in the front. Underneath this gown, Naxi women wear trousers, and on their feet they wear the traditional boat-shaped shoes. A Naxi woman's dress is traditionally in one of three main colors – blue, white or black – and is trimmed with lace about the collar and on the sleeves.

What makes a Naxi woman's clothing most distinctive is the cape on her back. This cape is made of black sheepskin and has seven round designs embroidered on it. These seven round designs represent the stars. White and black are the main colors. White symbolizes the sky; black symbolizes the earth. Together, the sky, earth and star representations that are sewn onto the Naxi woman's cape symbolize the industriousness of the Naxi people.

The 'Putting on Skirts' ceremony is a Naxi coming-of-age ceremony for girls. When a girl reaches the age of 13, she usually attends this special ceremony that is meant to signal her transition to adulthood. The evening before, New Year's Eve, the girls who will be participating in the ceremony get together to sing and dance and drink wine and tea to congratulate each other on having arrived at this stage in their lives.

Early on the morning of New Year's Day itself, each mother will help her daughter to put on a beautiful new dress and fine jewelry. Then the girl joins the rest of the family and guests and she sings together with the senior member of the family and expresses her gratitude and respect for the family for rearing her.

The senior congratulates the young adult-in-the-making on her health, her beauty and her capabilities. Finally, all guests present gifts to the girl. Having completed the ceremony, the young adult can participate in adult activities and choose and meet with a boyfriend.

The 'Putting on Trousers' ceremony is a corresponding Naxi coming-of-age ceremony for boys. During the ceremony, the boy stands at the "Male Rank." It conveys symbolic adulthood value: the boy plants one foot on a slab of pork meat and one foot on a rice bag while in his left hand he holds money and in his right hand he holds a knife – altogether, these are symbols of a rich and powerful life.

The boy kowtows (bows down) to the guests, and serve wine is served to express their gratitude. Finally, a shaman chants scriptures and serves sacrifices to the ancestor and to the kitchen god. Following the completion of the ceremony, the young adult, like his female counterpart, is thereafter allowed to attend all adult activities and to choose and meet with a sweetheart.

Naxi people are celebrating the Sanduo Festival. It is the grandest festival of Naxi minority.

The Sanduo Festival is the grandest one among the numerous festivals celebrated by the Naxi people. It is observed each year on the 8th day of the 2nd month of the Chinese calendar. Legend says that sanduo, the ancestor of the Naxi people, subdued devils and protected the people. The Naxi people regard the god sanduo as their supreme, or protector, god.

To honor sanduo, the local people built a temple on Jade Dragon Mountain in honor of him. On this day, people gather at the temple to offer sacrifices. Many Naxi people of the Lijiang area who do not participate directly in the Sanduo Festival often participate indirectly by attending outdoor picnics in honor of the "Offering Sacrifice to Sanduo" ceremony.

The Torch Festival is another Naxi festival. The Yi, Bai and related ethnic peoples from the Nanzhao/Dali era have the festival at the same time.

Touring the Lijiang Area with Us

Be aware that since Lijiang is such a popular tourist area and since it is a high-altitude area and the weather varies much during the year, for the best experiences, it is best to time your visit.

Try to avoid Chinese public holidays such as Labor Day (May 1 to 7) and National Day (October 1 to 7), and school summer vacations in July and August when Lijiang is full of Chinese tourists.

To avoid the rainy season and the worst weather, we recommend late March to May and mid-October to November.

Having a private vehicle when it is inclement is a great help and comfort.

The Advantages of Private Touring of Lijiang

If you would like to learn about the Naxis' unique culture and enjoy a more in-depth and hassle-free experience, a private tour is recommended. Our drivers and tour guides and drive you quickly around the area, arrange accommodations, and help with translations and shopping.

Moreover, since travel distances to Tiger Leaping Gorge, Kunming, Dali and other places are long, a private driver is great for saving time and going where you want.

Here are some of our popular Lijiang tours for your inspiration:

Our tours can be customized. Just tell us your requirements and interests.