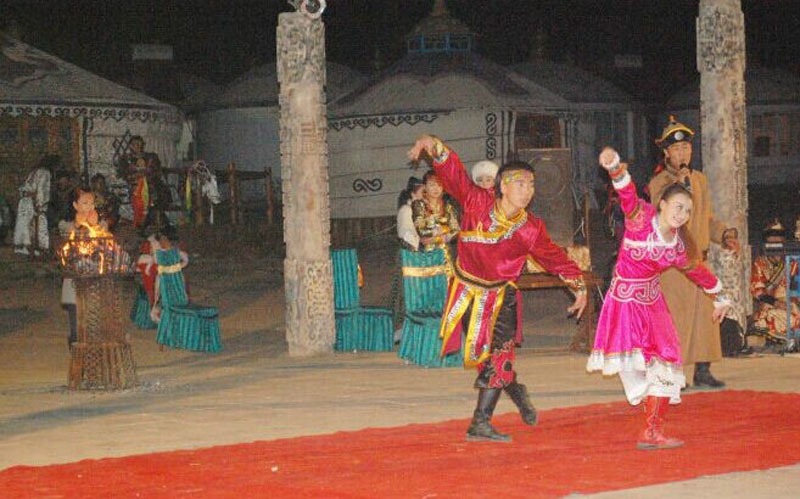 The Mongols have a history that is closely tied to the history of the Han Chinese because they ruled them for a 100 years in the 14th century Yuan Empire and ruled again under the Qing Dynasty (1644-1912). Now, there are about 6.5 million Mongols in China, and most live in Inner Mongolia.

They are known in history as creating one of the world's largest empires. They were experts at fighting on horseback.

Tourists enjoy visits in the vast plains of their homelands, staying in their yurts, and eating their dairy products and meat dishes.

Where Mongols Live in China

Most Mongols, about 6 million, live in China, and another 4 million or so live in Mongolia and Russia. Within China, the majority, more than 4 million, live in Inner Mongolia where they constitute about 17% of the population. They live alongside the Muslim Hui people and Daur ethnic groups.

About two million are scattered in regions around Mongolia and Inner Mongolia such as Jilin, Heilongjiang, Liaoning, Xinjiang, Hebei, and Qinghai. The Mongolians are known as horse riders, and animal husbandry is their leading industry.

Language: Most speak Mandarin Chinese, but they have their own spoken and written language. Their written script was created in the early 13th century, and it has been revised over the centuries.

The ancestors of the Mongolians belonged to nomadic tribes that roamed in a big area around the Erguna River east of Mongolia, Mongolia and Inner Mongolia. Scholars are yet generally unsure about the exact origins of the modern Mongols in the time before Christ.

Genghis Khan first defeated other Mongol groups and Tartars. Through defeating his enemies, forming alliances, and winning the loyalty of others, he managed to unite or subdue several big nomadic tribes and small countries such as the Uyghurs under his rule. At a council of Mongol rulers, he was acknowledged as the leader and was titled “Genghis Khan.”

Then he started leading big invasions. Before he died, he conquered much of northern China and started the huge Yuan Empire (1279–1368) in the east that was ruled by his children and grandchildren.

The Mongols controlled the rich Silk Road trade routes that enabled them to prosper and also to control the empire militarily. But the Yuan Empire fell through rebellion in 1361.

In 1361, the Mongol ruling dynastic clan fled northwards with thousands of other Mongols. They tried repeatedly to invade southwards.

The Oirat tribe and other Mongolian tribes took over the control of northern Xinjiang. They controlled the Silk Road trade after that, and they stifled trade with the West.

The Manchus made an alliance with a faction of the Mongolians and incorporated their troops into their army in the 1600s. The Manchus and Mongolians invaded again in 1664 and built the Qing Empire (1644–1912). The Manchus were the main rulers, but the Mongolians were treated with special honor and were part of the ruling class.

During the 1600s, a kingdom of Mongolian Buddhists called the Dzungar Kingdom arose in northern Xinjiang in the 1600s. A Qing army decimated them in 1761. Almost all of them were killed or fled.

The Mongolians' nomadic way of life determined their traditional diet that mainly consisted of meat, milk and other dairy products. They ate mutton, beef, and goat, and dairy products made from cow and goat milk. On special occasions such as during festivals or significant events, they ate horse meat. The Mongols regarded horses to be special animals and didn't eat them regularly.

The people of the steppe traditionally roasted meat over an open fire. The boiled tough meat. They baked bread in special ovens. Goats and mutton were roasted in sections or whole.

Milk is made into many products such as yoghurt, milk wine (i.e. fermented milk, the most prized of which is fermented mare's milk, which can be further fermented into a frothy, beer-like drink), milk tofu (coagulated, fermented milk, where the dry parts are separated and formed into a stiff, tofu-like texture), and milk tea that is made by crushing brick tea in boiling water for a few minutes and then slowly add milk while stirring.

An effect of being on the Silk Road is that Mongolian people like to wear silk and satin for special occasions.

The caftan, hat, sash and boots are indispensable for Mongolian attire. Caftans are made of various materials such as leather or cotton. The caftan can also serve as a makeshift tent, a blanket, or a screen. The long and wide sleeves can be rolled down to protect from the sun, wind or rain.

Women’s sashes are generally shorter and narrower than men's sashes. In some places, married women wear an embroidered silk vest instead of a sash. Men’s sashes are longer, folded into a broad band, and tied tightly around the waist. The sashes also serve to hold weapons and money pouches.

Hats have always been a special item of Mongolian attire. They might be adorned with whatever the owner values such as as pearls, precious stones and long, colorful tassels. A hat must be worn when meeting or greeting non-family members, entering a ger (though one may be invited to remove the hat once inside), and on the street. It is considered indecorous to go bareheaded.

A Hada (a Tibetan word) is a strip of silk used as a greeting gift among both Tibetans and Mongolians. It is presented under very specific circumstances only such as when welcoming unfamiliar guests into one's home or when encountering a stranger on the steppe with whom a cordial relationship has developed. A Hada is usually made from either silk or cotton.

Mongolian Hadas are generally white in color, but shades like light blue and light yellow are made as well. When one is fortunate enough to be presented a Hada, one should grasp it gently in both hands while bowing slightly, and the presenter will also bow in return. The giving and receiving of a Hada, including the act of bowing to each other, is an outward sign of mutual respect.

Passing the snuffbox is an old tradition in Mongolian culture, and is the most common traditional exchange of amenities when people meet. When one is a guest in a Mongolian home, the host will take out his snuffbox and open it. The contents are generally very aromatic and consist of a blend of tobacco and/or herbs.

When the host passes it on to the guest, he is expected to pass the snuffbox under his nose in order to better appreciate the tobacco's aroma. To be polite, one should nod one's head or give another sign of approbation. This shows respect and can serve as the basis for future amiable relations. The snuffbox contains a small spoon made of gold, silver, copper, ivory, or camel bone.

For Mongolians on the pasture, their typical house is the "ger" that is a kind of yurt, a domed round tent. The ger is composed of a wooden lattice frame stood a circle and secured with strips of rope.

The lattice forms a head-high self-supporting cylinder. A door frame, roof poles and a canvas outer covering complete the set framework. For additional stability, a heavy weight is suspended from the center roof pole. Inside, the ger is very spacious and well-ventilated. It can be quickly dismantled, packed away and then transported by yak or camel to the next destination.

Horse racing and other sports are part of the Naadam Festival.

Naadam, short for Eriyn Gurvan Naadam ("Three Manly Games") means "entertainment" in the mind of the typical Mongolian. The Naadam Grasslands Festival has a history that dates back to the Yuan Dynasty (1279-1368 AD).

The Festival is held on the 4th day of the sixth month of the Chinese calendar (between July and August in the Gregorian calendar) when the harvest season reaches culmination. The Festival can last 3 to 10 days, depending on the scale of the event, and people of any ethnic group or religious belief can participate in the games. Foreigners like to compete in the events.

The Naadam Grassland Festival in the Inner Mongolia Autonomous Region is the Mongolians' most magnificent yearly entertainment event in China, It combines the traditional "Three Manly Games" of Naadam – wrestling, horse racing, and archery – with cultural exhibits and even livestock fair. With a history of almost 800 years, the Naadam Festival has become an important carrier of the Mongolian traditional culture.

The Corban Festival is an important Islamic festival. Most Mongolians in China are Buddhist or not religious, but some celebrate it on the tenth day of the second month of the Islamic calendar.

Many descendants of Genghis Khan's people still live in yurts in the grasslands of Inner Mongolia and Mongolia. It is best to visit the cold Mongolian grassland areas in the late spring, summer and fall.

Mongolians invite travelers to stay in their yurts, and tourists like to visit the plains, sightsee, walk and ride horses. The Huitengxile Grassland and the Xilamuren Grassland are two grassland areas tourists can go to outside Hohhot.

Our expert personal tour guides can help ensure a warm welcome and facilitate your travel. China Highlights can also help you tour Mongolia.

See more about Top Things To Do in Inner Mongolia. Our tours are typically custom-made - tell us your interests and requirements and we will help you to tailor-make an Inner Mongolia tour. Inquiries are free and receive a response within 24 hours.