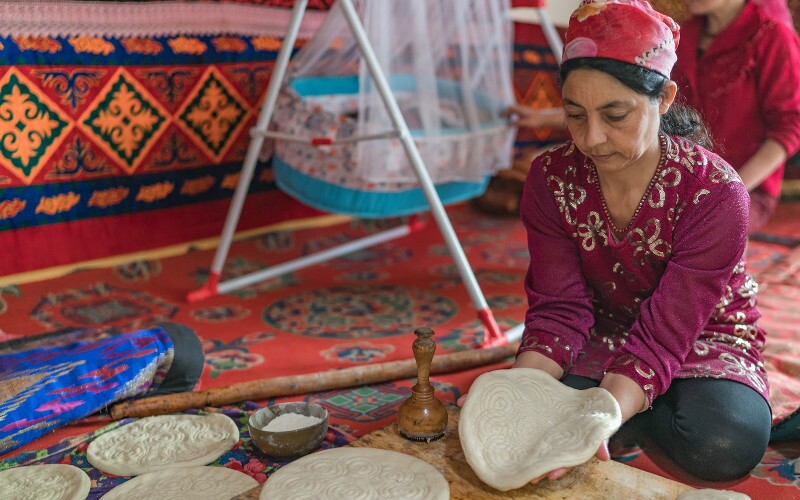 Although Beijing may be far from some of the furthest ethnic minority regions, in both culture and physical distance, China's capital offers some of the best opportunities for minority food. This may be the easiest, fastest and cheapest way for foodies and explorers to "travel" further west. Xinjiang Uyghur Autonomous Region is China's utmost northwestern province, and is autonomously governed as China's largest administrative region. The region borders many Central Asian nations, and is home to various ethnic groups, the largest and most visible culinary influence of which are the Uyghur people.

The Uyghur cuisine shows elements of Central Asian as well as Chinese cooking, with an abundance of ingredients available in the region. Mutton is often used in Uyghur cooking, for example in pilaf, or polo, which consists of rice, carrot, mutton and raisins, made of grapes that also abundantly grow in the region's favorable climate.

The best place to try Xinjiang cuisine in Beijing is:

Xinjiang cuisine is available in many different budgets at street stalls or roadside restaurants, which will be marked as Halal in Arabic, generally with green name signs. These smaller restaurants serve kebabs, or chuanr, which essentially is a variety of different meats and vegetables, and even tofu, on sticks fresh off the barbeque. This is the cheapest, and some say the most authentic, way to experience Xinjiang cuisine. Yunnan Province is located in Southwestern China, and borders Laos, Vietnam and Myanmar. Yunnan is extremely mountainous, and the majority of the population lives in the eastern part of the province. In total, 34% of the province's population belongs to an ethnic minority, mainly Yi, Bai, Hani, Zhuang, Miao and Dai, some of which also reside in neighbouring countries.

Due to its close proximity to Southeast Asia, and it's vast ethnic minority diversity, Yunnan cuisine encompasses many elements that differ to other Chinese cuisines. For example, Yunnanese cooking is rich in herbs like coriander and mint, while even flowers like jasmine are used a lot. Most dishes tend to be a bit spicy, but also differ throughout Yunnan, as the province is inhabited by so many different ethnic minorities. Try:

The Tibetan Autonomous Region is located on the Tibetan plateau with an average elevation of 4,900 metres. The region is heavily agricultural, and some of the main produces are yak and barley.

These two produces combine perfectly to make momos, the Tibetan dumplings which are made using dough made from barley flour, and often filled with yak meat. They are perfectly accompanied by a cup of butter tea, pocha, which is an acquired taste, but an important part of Tibetan culture and definitely worth a try. It is made using black tea and female yak's milk. Other than that, Tibetan cuisine has many influences from the Chinese, the Indian and Nepalese cuisines.

One of the best places to try some Tibetan food in Beijing is: Ningxia Hui Autonomous Region, also located in China's Northwest, largely consists of Hui ethnic minority people. The area is around 66,400 square kilometres, most of which is desert regions, and features the Great Wall of China along the north.

Its cuisine is Muslim influenced. Mutton is a very popular ingredient, and it comes in many different ways. For example lamb braised in soy sauce, or in a clear soup. Some classics like roujiamo, a Chinese take on lamb burgers, and lamian, hand-pulled noodles with various meats or vegetables, also have roots in Ningxia.

A great place to get a taste for authentic Ningxia cooking is at:

Food is such a vital part of travel. To make the most of your time in China, China Highlights can tailor make your itinerary to fit the restaurants that you are most interested in. Simply contact us to find out more.