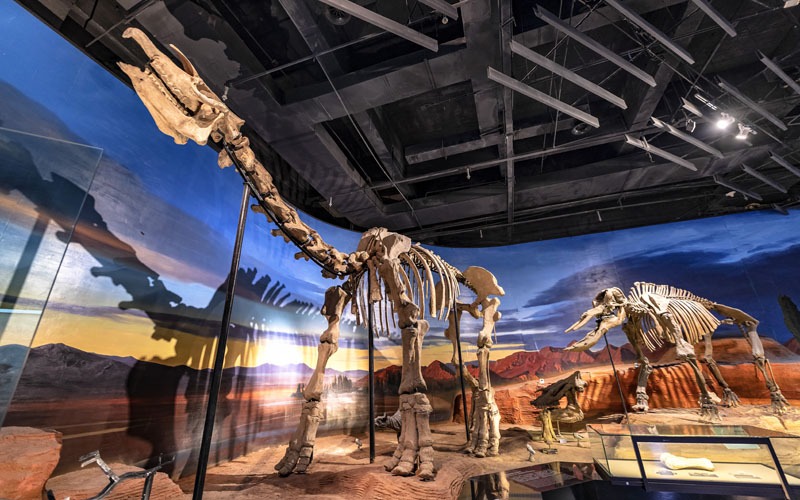 Paleozoological Museum of China is currently the largest of its kind in Asia, featuring ancient animals' fossils. It was built by the Institute of Vertebrate Paleontology and Paleoanthropology of Chinese Academy of Sciences. As the first national museum focusing on fossils of ancient creatures, Paleozoological Museum of China aims at spreading scientific knowledge of ancient biology, ecology, anthropology and evolution. Its construction area is about 3400 square meters. One third of the identified dinosaur fossils in China are on display at the museum. This ranks the first in number among China's museums.

This museum is an ideal visiting place for families with kids who are interested in ancient animals. Please also see Things to Do with Kids in Beijing, China Family Tours, or contact us for tailor-made China tours.

The museum consists of two exhibition centers, four exhibition halls and a large special exhibition hall, which are in accordance with the sequence of the evolution of ancient animals. There are a representative collection of 970 pieces on display, including various categories of animals and ancient human fossils and Paleolithic specimens from 1 – 4 million years ago. The whole museum comprehensively displays prehistoric animals and ancient human remains, which tells the magnificent history of the evolution of life.

Through the rich exhibits and colorful stories, as well as a set of scientific, interactive and entertaining multimedia electronic gaming device, visitors can have a comprehensive and systematic understanding of the evolution of the prehistoric life.

If you are very interested in museums, it's advisable for you to visit the Zhoukoudian Peking Man Museum, China's National Art Museum, the Geological Museum of China, the Beijing Folklore Museum and the China Science and Technology Museum during your Beijing tour. Of course, the Forbidden City, the Summer Palace and Prince Gong's Mansion are also highly recommended.