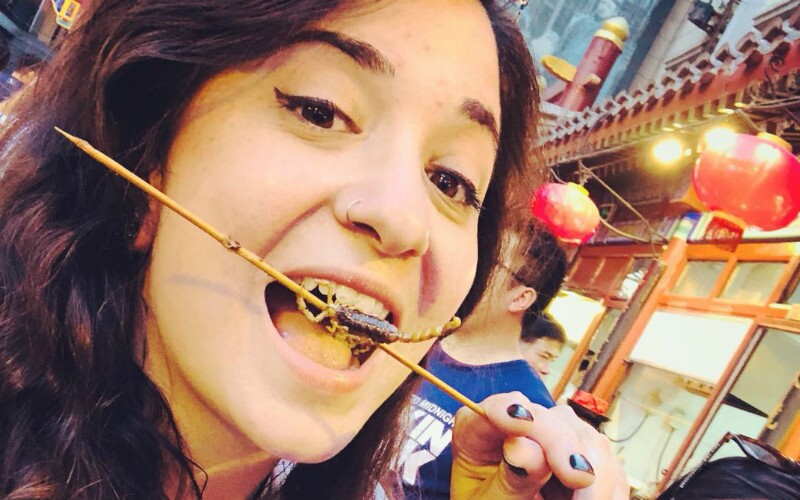 Beijing Quanjude roast duck is a must-be-tasted dish for tourists to Beijing, but when you are strolling the streets of Beijing consider biting into some street snacks. Especially try areas around schools and universities, where you are likely to come across some vendors or small shops selling various street snacks.

Tourists might beadvised to avoid street snacks for reasons of hygiene and palatability. However, street snacks are often the best part of a city’s culinary experience, and each of them only costs you a few yuan.

China Highlights has listed the most popular street snacks and best places to taste them here. Most can be found in Beijing food street.

A fried dough ring looks like a brown bracelet, with a crispy taste and well-cooked fragrance. The main ingredients are flour and salt. It is an ancient snack in Beijing. The locals always eat it with soybean juice, or wrap it in a thin pancake.

Because the production processes of making fried dough rings are too complicated, and the profit is too low, many snack shops do not serve this traditional Beijing street snack, so fried dough ring has been disappearing from Beijing's streets for some time.

The tried dough ring is a high-calorie food, so China Highlights suggests you just try it, and not eat too much.

Pouring and spreading the batter on a flat heated surface to form a thin pancake or crepe, pouring on an egg and letting it cook, spreading on a sauce, placing on slices of deep-fried dough stick, sprinkling on some chopped green onion, cumin, and sesame, and finally rolling it into a wrap — that’s the processes of making a fried thin pancake wrap, or street crepe, which takes about four minutes.

The treet crepe oringinated as the most famous snack in Tianjin. However, it has spreaded to many Chinese cities, and is very popular in Beijing, so we can categorize it as a Beijing snack.

It is difficult to find this type of crepe in a restaurant. Only at a street-side stall (in the morning) can you get a fried thin pancake wrap.

Steamed triangular dumplings are also available, which might be preferable as they are healthier.

Buckwheat cake is a salty snack especially popular on summer days, when it is always sold together with iced bean jelly. This grey cake is often served in slices, with vinegar, sesame paste, chopped chilies, mustard oil, and a little soy sauce. It tastes sour, spicy, and cool.

Buckwheat food has high nutritional value, but is a heavy food. It is not fsuitable for those with heat disease, the diabetes, or high blood pressure. China Highlights suggests you do not eat too much, but do taste it.

The locals in Beijing really appreciate drinking it. But if it is your first time to taste bean juice, you might not get used to its flavor. However, the locals will encourage you that if you push yourself to taste it twice, you will fall in love with it.

Best places to taste stir-fried pork liver: Many locals like to eat "stir-fried" pork liver together with steamed buns. You can find the snack in many small restaurants. However, the most famous two are:

You might think that lamb tripe is not eatable. That is obviously wrong in Chinese food culture. In fact, lamb tripe can be made into very delicious dishes, known for their tenderness and crispness. In China, they are popularly eaten with wine.

How to eat boiled lamb stripe: Boiled lamb tripe should be eaten as soon as possible, because it will become very chewy when it is cold.

Beijing tea soup is also called Dragon Tea (龙茶) because the teapot for making it has a dragon-headed spout.

The processes of making a bowl of tea soup involves real skill. Some millet flour (or lotus root starch) and hot water are mixed well in a bowl, and then boiling water is poured rapidly into the bowl using a teapot with a spout. The tea soup is brewed, and finally some brown sugar, sweet osmanthus sauce, peanuts, and raisins are added.

Best place to taste tea soup: One of the most famous places to taste Beijing tea soup is Juyuan House (聚元斋) in Qianmenwai (前门外).

The skin of the sausage is made of cleaned pork intestines, and the fillings is a paste made from mixed flour, red yeast rice powder, and a sauce. After cooking thoroughly, the sausage is sliced into pieces and fried in pork oil, and at last, sprinkled with a salty sauce and minced garlic.

This pancake got its name because of its doornail shape. Its making is almost the same as that of making a pasty. It has cylinder shape (about 3cm high). The fillings of the pasty are made of minced beef, egg, onion, and fresh ginger. A ready-to-eat doornail pasty is well fried with a golden skin.

Contact us to have us design a customizable tour for you, which will allow you as much time as you want for tasting Beijing street snacks, experiencing traditional Chinese culture, and even making Chinese dishes after you’ve seen the sights.

Sugarcoated haws became popular in the Qing Dynasty (1644–1911), when it was a most-loved children's snack. It is one of the most authentic Beijing snacks, a must-taste sweet developed from the simple sugar-covered hawthorn berries to a variety of candied fruits on a stick.

You can find vendors selling sugarcoated haws on Beijing snack streets, but also in some tea buildings, opera theaters, and temple fairs.

'Rolling donkeys' are glutinous rice rolls with sweet bean flour, one of the most established Beijing snacks, made of soybean flour mainly. The skin of a "rolling donkey" is yellow, so it looks like a donkey rolling about on the ground and kicking up a cloud of dust. It tastes sweet and sticky, with about three layers of sweet bean paste.

Experience the Snacks and the Sights with China Highlights

China Highlights' customizable Beijing tours allow you as much time as you want for tasting Beijing street snacks, after you’ve seen the sights.