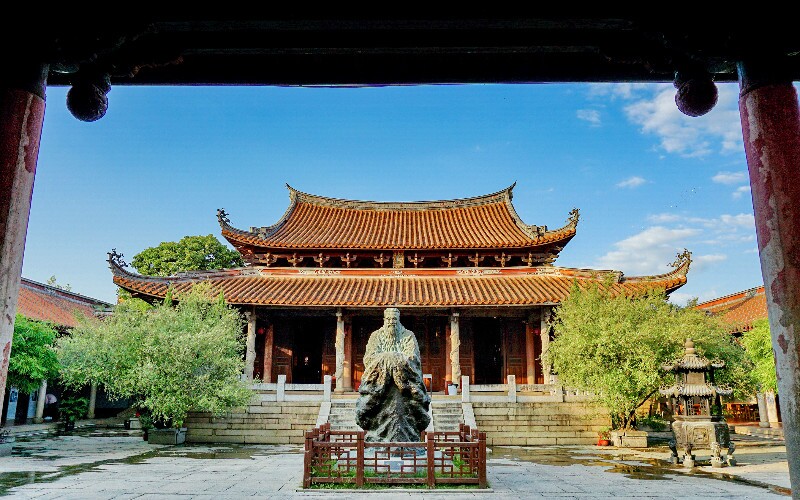 Confucianism is the main ancient philosophy of China. It implicitly embodies key aspects of Chinese culture. Confucian beliefs have constantly changed and developed over the past 2,500 years.

Confucianism has been the code of ethics adopted by most of the great Chinese empires (206 BC – 1912 AD). The ideas of Confucius, Mencius and Xun Zi were codified and adapted over millennia into system of doctrine known as Confucianism.

Three men built the doctrinal framework of Confucianism during a 270-year period from around 500 BC: Confucius, Mencius, and Xun Zi.

The creator of Confucian beliefs was Confucius. He was born around 551 BC, at a time of great philosophical creativity (the Spring and Autumn Period).

It's generally believed that when Confucius was in his late 60s, he returned to his hometown Qufu in Shandong Province. For several years in his early 70s, he taught a group of disciples who later propagated his beliefs and developed their own philosophies.

Mencius is now considered the second most important Confucian philosopher. During his life, however, he was more influential than Confucius himself, because he taught many noblemen and rulers.

In his book Mencius, he supplements, he supplements the philosophy of Confucianism by a system of ideas positing the goodness and perfectibility of people. Confucius himself seems to have been silent on this subject.

In contrast to Mencius, Xun Zi taught that human nature is basically bad. Xun Zi taught that man's nature is "wayward" from birth, but that virtuous teachers could cultivate morality in others through intensive training. He argued for strict laws governing personal behavior.

Like Mencius some decades before, the Confucian Legalist Xun Zi worked at the Jiaxia Academy of the Kingdom of Qi. Befitting a Legalist, Xun Zi's writings are systematic, wordy, and elaborately argued. He was intolerant of other philosophies and philosophers. He attacked Mencius and Zhuang Zi by name.

Xun Zi taught Li Si, and Li Si emerged as the leading official under the First Emperor (260 – 210 BC). Strict rules were imposed in the newly unified China, about everything from language to religion. Ordinary people were reduced to slavery to create The First Emperor's necropolis, the Terracotta Warriors and the first Great Wall, to work on other great projects, and to fight in wars of expansion.

Li Si promoted the "book-burning" of the Qin Emperor and the extermination of perhaps thousands of philosophers with alternative ideas, including Confucians.

At first, Liu Bang (first emperor of the Han Dynasty) was against Legalism and didn't think highly of Confucianism. Later, however, he had a favorite Confucian teacher named Lu Gu, who convinced him of the need for both Legalism and Confucianism.

Confucian texts, however, had been burned during the Qin "book-burning" campaign of 213 BC. Any texts still remembered were written down again by scholars, in the "New Texts".

The Development of Confucianism Under Emperor Wudi (141–87 BC)

Then under Emperor Wudi (Han Wudi, 156–87), who ruled 141 to 87 BC, Confucianism was institutionalized. Wudi instituted the Imperial Academy to promote Confucian philosophy.

The Four Books and Five Classics

Wudi ruled that to be an official scholar, people had to teach the Confucian classic texts called the Five Classics. According to tradition, the Five Classics were penned by Confucius. Modern scholars, however, doubt that any of the material can really be ascribed to Confucius himself.

The Five Classics are:

The Mandate of Heaven — Who Should Rule

He promoted the idea of the innate noble nature of man, postulated by a Confucian scholar named Dong Zhongshu, who added some Legalist ideas to the teaching of Mencius. He and later emperors approved Dong Zhongshu's new strain of Confucianism for its emphasis on the Mandate of Heaven.

Confucianism's Mandate of Heaven was a key concept underpinning imperial legitimacy. Heaven chose a particular man and his descendants to be mediators between Heaven and the people. The man was like a god. Heaven's decision was known through the interpreting of natural omens and circumstances.

During Wudi's reign, texts of some Confucian books were discovered in a wall of the Confucian clan compound in Qufu, believed to have been hidden there to save them from the book-burning campaign of 213 BC. These were published as the "Old Texts". There was controversy, however, about which set of documents – New Texts or Old Texts – was correct.

By the time of the Tang Dynasty, the imperial courts still appointed Confucian scholars to the ruling bureaucracy. Special examinations tested the candidates' literary skills and knowledge of Confucian texts.

Buddhism had been introduced to the Han Empire about 68 AD. By the time of the Tang Dynasty, Buddhism was the dominant religion.

Towards the end of the Tang Dynasty, an influential Confucian scholar named Han Yu promoted repression of foreign religions. In 845 AD, Emperor Wuzong (814–846 AD) decreed that all foreign religions were banned and closed thousands of Buddhist monasteries and temples.

Due to this repression, the Mencius strain of Confucianism became the dominant political philosophy of the later imperial eras, and Buddhism went into decline.

Han Yu's earlier teachings were influential in the emergence of a philosophy called Neo-Confucianism. This tended to elevate rationalism and was centered round the idea of the Mandate of Heaven.

The Imperial Examination system set the standard by which almost all Song court official were chosen. To pass the examination, almost all bureaucratic needed to learn by heart the Four Books of the Neo-Confucian Classics.

The Neo-Confucian Classics were the Four Books and Five Classics (四書五經). These nine books were compiled, standardized, and compiled during the Song era, and served as standard examination material from the Song Dynasty (960–1279 AD) to near the end of the Qing Dynasty (1644–1912 AD), except for the Yuan Dynasty (1271–1368 AD).

The Four Books were considered most important. These were:

Confucian Teachings — Then and Now

The Confucian political hierarchy disintegrated along with the Qing Empire in 1912. But many Confucian beliefs still comprise what Chinese around the world consider to be their culture.

These include the ideas of harmony, obedience to parents and authority, that people should be trained and forced to behave "properly" in their roles, and an idea of reciprocity (do to others as they do to you, whether good or bad).

Most Chinese feel that people are born at least slightly good, in keeping with the teaching of Mencius and of Daoism.

The Analects of Confucius

In the Analects of Confucius, Confucius maintained he didn't invent any of his philosophy, but was simply passing on ancient teachings to his disciples. He generally encouraged everyone to behave as they ought, in whatever role they had in society. He said that if they did so, there would be harmony, prosperity, and happiness.

He taught what is called "the Silver Rule of behavior", somewhat less comprehensive than "Christ's Golden Rule" (of doing to others what you'd like them to do to you):

Inspired in part by Western influence and the leadership of Sun Yat-sen and other Christians, there was a revolt against Confucianism around the end of the Qing Dynasty, between 1900 and 1920. China's problems were blamed on old traditions and ideas.

The doctrine of the Mandate of Heaven is now inapplicable, because there is no longer an emperor in China.

Instead of the emperor, most modern Chinese people worship various Daoist and Buddhism deities, as well as their own ancestors (according to Confucian doctrine about revering parents). Most Chinese still have some belief in the worship of ancestors.

Contemporary Confucian philosophers are not well-known and have little influence anywhere in the world.

Visit Qufu to Discover the Roots of Confucianism

Most of the historical sites related to Confucianism are located in Qufu, the hometown of Confucius, in Shandong Province. The Qufu International Confucius Culture Festival is convened every year between September 26th and October 10th, in honor of Confucius.

Confucius was buried in a cemetery called Kong Lin. You can tour the Confucius clan compound, his grave, and one of the main Confucius temples in China.

Delve into Imperial Philosophy in Beijing

The Imperial Academy in Beijing is where imperial court candidates studied Confucianism for centuries. Visit the Forbidden City to see where Confucian doctrine was implemented. The Temple of Heaven is a shrine to the Mandate of Heaven, where emperors prayed to heaven for favor.

Our Golden Triangle itinerary (Beijing–Xi'an–Shanghai in 8 days) can be customized to see the Confucian sights and anything else you'd like to find out more about.

Or we can design your own individual tour from your requests.