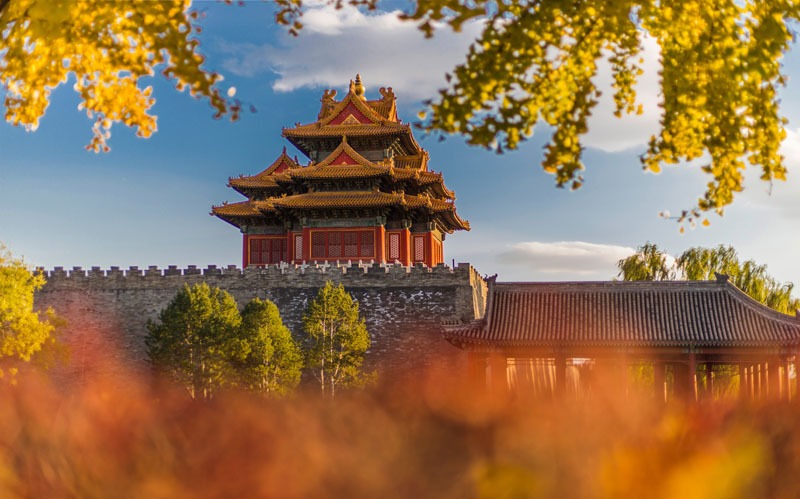 The Imperial Garden is at the northernmost point of the Forbidden City in Beijing, which is situated behind the Palace of Earthly Tranquility. It was built for emperors and their wives to relax themselves and enjoy beautiful scenery, but was also used for sacrificial rites, keeping fit, book collections, reading, and other purposes.

This garden was originally built in the 18th year of the Ming Dynasty’s Yongle period (1420 AD). In later years, it was extended. Today, it still remains in the pattern designed when it was originally constructed.

The Hall of Imperial Peace is the main building in the Imperial Garden, which has a double-roof and an even Chinese roof.

To the south, east and west of this hall, pavilions were built. Bamboos, cypresses and pines in the Imperial Garden are interspersed with hill stones, forming an evergreen landscape.

Main Sights of the Imeprial Garden

It divides the garden into eastern and western parts. About 20 halls and chamber rooms of different styles were almost symmetrically built on the east and west sides. Only beautiful and small pavilions were arranged in the garden. The base of the Hall of Imperial Peace is a sumeru base made of white marble. Dragon and phoenix patterns on the balusters and breast boards are gracefully shaped sculptures from the Ming Dynasty.

Piled Elegance Hill is located in the north-east of the garden. It is a 14 meters high artificial rockery. This hill is made entirely from a pile of peculiar-looking stones. There is one stone-carved dragon’s head on each of the two stone lion pedestals in front of the hill.

Water spurts from the mouths of these dragon heads, forming 10 meters high water columns. This is a very spectacular sight. The paths at the foot of the hill twist and turn their ways to the hilltop.

This hill is the place for people in the royal palace to ascend to a height on the date of the Double Ninth Festival. There are piled-up peculiar stones, winding stone step paths, stone-carved dragons with water spurting out of their mouths at the foot, and the Imperial View Pavilion at the top where people can overlook the surrounding scenery.

Cypresses and Chinese wisteria in the garden are all hundreds of years old. There are more than 160 ancient trees, which are distributed around the garden. In addition, this garden is also interspersed with various hill stones and miniscapes.

There is a miniscape made of a section of wood stone, which looks like deadwood after long-term exposure to the blazing sun, but the sound when it is knocked indicates that it is indeed stone.

On the pavement of the pathway, there are more than 900 patterns that were made through putting pebbles of various colors together, including figures, scenery, flowers and plants, operas, and idiom stories.

On some important festivals, relevant activities were held in the Imperial Garden. During the Dragon Boat Festival in May, people enjoyed Zongzi; on the Middle Autumn Day on August 15th, the rite of sacrificing to the moon was held; during the Double Ninth Festival, emperors and their wives ascended to the Imperial View Pavilion to look into the distance to pray.

The Forbidden City is a must-see attraction for visitors to Beijing. Visitors are limited to 80,000 a day. It is advisable to book well in advance. For more expert advice, see How to Visit the Forbidden City — for Discerning Travelers.

Check out some of our Beijing tours for inspiration: