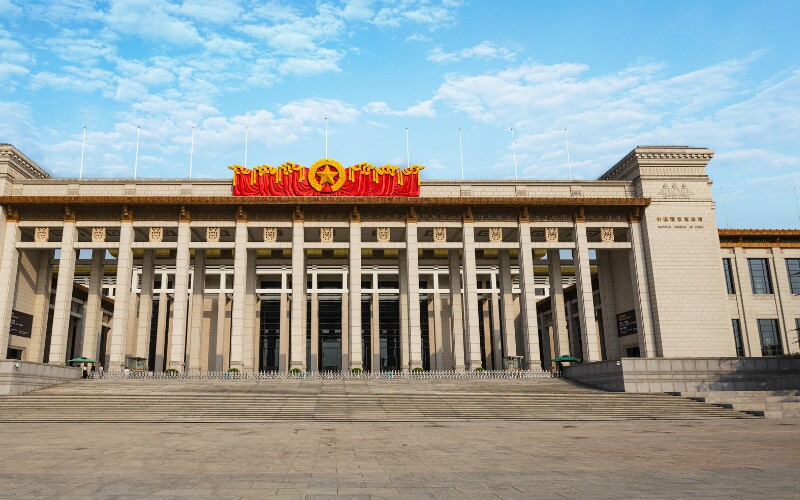 The National Museum of China

The National Museum of China

Beijing has about six or seven major tourist highlights including the Forbidden City, the Temple of Heaven, and the Great Wall. But the National Museum of China is often overlooked by tourists though it sits right next to The Forbidden City and Tian'anmen. It is actually one of China's best museums and is the world's third most visited museum.

The National Museum — One of China's Biggest Collections of Ancient Treasures

Tian'anmen from the National Museum of China

With so many other interesting places in Beijing to go to, foreign tourists often miss this premier national museum on the eastern side of Tian'anmen. It is the most visited museum in Asia. The ancient antiques exhibit is among the best in the country, but the museum main emphasis is modern history.

The grand capital city scenery all around Tian'anmen is worth a look around. So while you are looking around at all the modern and ancient construction, you can visit the museum. Entry to the National Museum is free for foreign tourists.

Amazing Antiques and Treasures Inside

The highlight for the tourists is the thousands of pieces of artwork, treasures, and artifacts. Some of it is worth a lot of money, and many pieces are quite beautiful showing the techniques and styles changing over the centuries.

Many of these antiques are displayed in "China Through the Ages." It is a chronological display up to the Qing Dynasty. They are also displayed in galleries called Bronze Art, Jade, Porcelain, Coins, Buddhist Sculpture, Chinese Calligraphy and Paintings, Ming (1368 to 1644) & Qing Furniture, and others.

While at the Museum See the Adjacent Highlights

The Forbidden City is near the National Museum

The grand capital city scenery all around Tian'anmen is worth a look around. So while you are looking around at all the modern and ancient construction, you can visit the museum. Entry to the National Museum is free for foreign tourists.

All around Tian'anmen, you can see the contrast between the ancient imperial construction and modern government buildings and vast plazas and open areas. It is scenic, and seems otherworldly in congested Beijing.

The Forbidden City (Palace Museum) is the most massive complex of preserved ancient structures in China and is 600 years old. It is now China's best museum. It was the best of China's architecture. The Palace Museum is a highlight for learning history and seeing exhibits.

The National Museum is one of the best museums, and there are others in Beijing and around the country to see too.

8-Day Tour of Beijing, Shanghai, and Xi'an: The Forbidden City, Temple of Heaven, Great Wall, Summer Palace, Terracotta Warriors, and Shaanxi History Museum are just part of this tour. Tell us, and we'll include the National Museum.