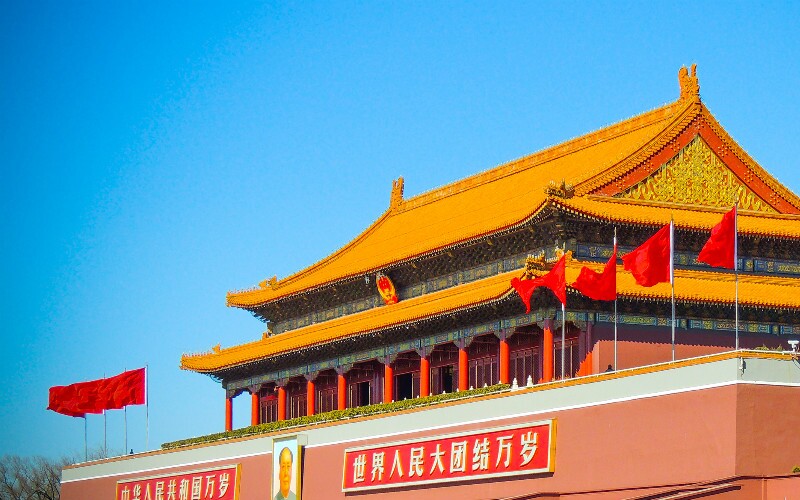 Tian'anmen Square is located in the center of Beijing and is one of the most important places for the Chinese people. The square has hosted many historical events in the past and is an absolute must-see when traveling in the Chinese capital. This you should know, as well as the 10 or so things below.

1. Tian'anmen Square is one of the biggest squares in the world.

Tian'anmen Square is not all concrete! It has some attractive borders.

Tian'anmen Square was originally built in 1651, but enlarged four times and cemented over in 1958. It was then the largest square in the world for 17 years. The square is now the world's sixth largest city square, but by far the most visited: by millions of both Chinese and foreign tourists.

2. The square is named after The Gate of Heavenly Peace.

The square is named after the original main gate of the Forbidden City, which was called ‘Heavenly Peace Gate’ (Tian'anmen). The gate is located at the northern end of the square.

The portrait of Chairman Mao is showcased in front of Tian'anmen Gate. This is also the entrance to the Forbidden City which is another must-see on your trip to Beijing.

3. The square is surrounded by many important sightseeing spots.

There are many important sights to see at and around Tian'anmen Square. In the center of the square, you can see the national monument made for the People’s Heroes. This monument was built in 1958 and was made to honor the victims of the 19th and 20th century revolutionary struggles in China.

4. Chinese history is collected in the National Museum by the square.

The National Museum first opened in 2003 and is a place worth visiting to learn more about China's colorful history.

Another important place to visit is the Chairman Mao Memorial Hall, on the southern side of the square (Mao's crypt continues to be popular with nationals, but most foreign visitors don't find it worth the queue).

The memorial hall is the last resting place of Mao Zedong, the first founding father of the People's Republic of China and longest-standing Chairman of China from 1949 to his death in 1976.

6. Stunning Ming Dynasty architecture can be seen at the south of the square.

If you walk further south of the square, you will reach the stunning sight of Qianmen gate, first constructed during the Ming Dynasty period (1368–1644).

The gate was once the southern entrance to the inner city of Beijing. Even though most of Beijing's city wall has been destroyed, Qianmen Gate is still an important spot in the city and a popular sight for tourists.

7. There is world-class shopping in a traditional Chinese setting.

Behind Qianmen gate, you can also find the famous Qianmen Street, which has been rebuild as it looked like in ancient China. The traditional architecture and replicas of old tea shops will give you a look back into the old China, but you can also shop international brands and enjoy a Starbucks coffee in the pedestrian street.

8. The Chinese Government holds political meetings in the Great Hall.

On the western side of the square, you can find the Great Hall of the People, which is used by the People’s Republic of China’s government and the Communist Party of China. Various meetings, ceremonies and congresses are being held here.

The building can host up to 10,000 people at once, and has been an important part of Chinese history as well.

9. Flag ceremonies are performed at dusk and dawn every day.

The Chinese soldiers are raise the Chinese flag at the square every morning at sunrise and lower the flag again at sunset. During the ceremony, they will sing the Chinese national anthem. If you don’t mind getting up early, this is a great experience.

10. There will be a lot of security checks at the square.

Because of Tian'anmen Square’s importance, security is tight at the entrances and you have to prepare yourself for lines before entering the square. However, there is no ticket gate, as entry is FREE!

You can get there by taking subway line 1 to Tian'anmen East or West station.

High-Quality Beijing Tours, Tailored for You

China Highlights offers high-quality tailor-made tours around Tian'anmen Square and the nearby sightseeing spots. You can contact us for assistance creating your own Beijing tour.

We also offer group tours and customizable itineraries. You have many different choices with China Highlights. Here are some of our favorites for Tian'anmen Square and around: