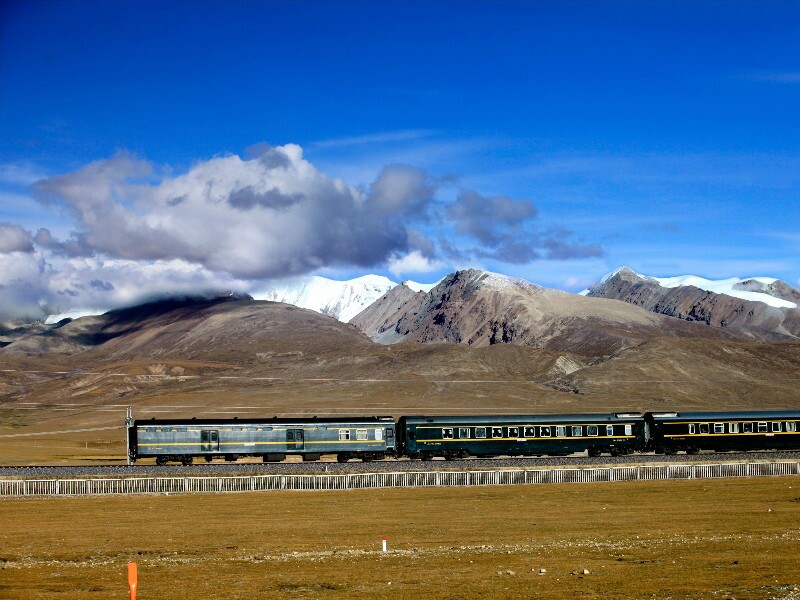 Breathtaking Scenery along the Qinghai-Tibet Railway

The Qinghai-Tibet Railway is known as "a magic way through the roof of the world". It starts in Xining, capital of Qinghai Province, and climbs to the holy city of Lhasa, capital of Tibet, with a total length of 1,956 kilometers(1,215 miles).

Scan the QR Code to contact us on Wechat!

Have you been dreaming of a Tibet tour for a long time? It's time to restart your travel plans now. Tibet has reopened to China ex-pats after being closed for more than a year. The first Travel Permits in 2021 were officially issued on August 27th.

Contact us now to plan your tour and prepare your Tibet Travel Permit documents in advance. Don't worry about canceling. We allow free cancellation for any reason up to 24 hours before departure.

The scenery along the Qinghai-Tibet railway is stunningly beautiful, with vast grasslands, crystal clear alpine lakes, deep gorges, and snow-capped mountains. The most beautiful scenery is on the Golmud-Lhasa section

When passing through the Tanggula Mountain Pass, you will reach the highest point of the Qinghai-Tibet Railway with an altitude of 5,072 meters (16,640 feet).

We cover the 14 top scenic railway features like Tanggula Pass with track altitudes below.

Starting from Xining Station, it takes an hour to reach Qinghai Lake, which is the largest salt lake in China, covering an area of 4,500 square kilometers (1,700 square miles).

The train passes by the north shore of the Lake and you can see many migratory birds flying there.

In the countryside along the way, you can see herdsmen and farmers in their ethnic clothes. The train will travel for more than an hour along Qinghai Lake.

Leaving the pasture around Qinghai Lake, the train will enter Haixi Mongolian and Tibetan Autonomous Prefecture, where Golmud is the largest city.

You will pass through Guanjiaoshan Tunnel, the highest tunnel in the Xining- Golmud half of the railway. It is about 32 km (20 miles) long.

Desert scenes and arid mountains appear indistinctly in the distance, and you will also see large areas of farmland.

As the train descends south, after Delingha Station the spectacular sight of Salt Bridge appears. It is the only rail track built over a 'salt lake' in the world.

Witness the unique spectacle of track-laid-on salt crystals. This section of railway, the only railway built on salt, is just one of the unique highlights of the Qinghai Tibet Railway.

Contact us to tailor-make a trip to Chaerhan Salt Lake

Bidding farewell to Cha'erhan Salt Lake and the salt flats area, the train will travel through the vast Qaidam Depression desert and then reach Golmud, where the first section (roughly half) of the Qinghai-Tibet Railwayends.

Strictly speaking, the following Golmud-Lhasa section is what is called"the Sky Road”. From Golmud, you will continuously travel on a permafrost engineered track.

Read more about Golmud, the third-largest city on the Qinghai-Tibet Plateau after Xining and Lhasa.

From Golmud, the train goes deep into the Kunlun Mountains, which is the backbone of the mountain chains in Western China. The mountain range starts from the Pamir Plateau in Tajikistan in the west and extends to Qinghai via Xinjiang and Tibet.

Located in the hinterland of the Qinghai-Tibet Plateau, Hoh Xilh has the Kunlun Mountainstoits north and the Tanggula Mountains to its south.

Human beings seldom step on it, thus it's known as the "forbidden zone for humans". It is also renowned as the "animal kingdom on the Tibetan Plateau” with wild animals such as Tibetan antelope and wild yak.

There is a 20-km-long (12-mile-long) elevated stretch of the railroad running across the wildlife passageway, which was elevated so as not to impede the animals' migration.

The Qinghai-Tibet Railway was designed to be an 'environmental protection railway'.

The Chuma'er River is a northern upper tributary of the Yangtze River. In Hoh Xil, you can see Chuma'er Bridge, which is a 2,565 meters (1.6 miles) long elevated railroad, crossing the wide river valley.

It is in the core area for animals' migration. The space under the bridge allows Tibetan antelopes and other wild animals to pass freely.

Every summer, groups of Tibetan antelopes pass westwards under the Qinghai-Tibet Railway from the eastern Kunlun Mountains to the hinterland of Hoh Xil.

Originating from the southeast side of the Geladaindong, the tallest peak in the Tanggula Mountains, the Tuotuo River is the source of the Yangtze River at an altitude of 4,700 meters (15,400 feet).

The river is the most concentrated area of villages on the Golmud-Lhasa section of Qinghai-Tibet Railway, and also the most important transportation corridor.

Tanggula, in Mongolian, means a high mountain where eagles can't fly. Tanggula Mountain Pass is the highest point on the Qinghai-Tibet Railway, and it marks the border between Qinghai and Tibet.

The Tanggulas is a mountain chain in the middle of the Qinghai-Tibet Plateau that runs east-west. Geladandong is their highest peak at 6,621 meters (21,720 feet) above sea level.

The oxygen content in the air there is only 60% of that at sea level, so people often have serious altitude sickness when stepping off the oxygenated train at Tanggula Station.

Shortly after Tanggula Mountain Pass, the train will reach Tanggula Station, which is not only the highest railway station in the world at 5,068 m (16,627 ft), but also the only railway station at an altitude of more than 4,786 m (15,702 ft).

Leaving Tanggula Mountain Pass, the train enters the first county in Tibet on the Qinghai-Tibet Railway: Amdo in Nagqu Prefecture.

The train goes all the way along the edge of Changtang Grassland, the most charming and wonderful section of the whole rail line. There, you will have your first chance to see the distinctive dwellings of Tibet.

The houses are low and crude in pastoral areas, the cornerstone of (nomadic) Tibetan lifestyles.

Soon after leaving Amdo Station, the train will pass by Cona Lake, also called Tsonag Lake, which is regarded as a sacred lake by Tibetan people.

Tsonag means 'Black Lake' in Tibetan, but it is definitely a lake without pollution. It is totally different from the pale salt lakes in Qinghai: the water is like a deep-green mirror inlaid on the plateau grassland.

It is the closest lake to the Qinghai-Tibet Railway, which is only a few meters away. Therefore, you can sit on the train and enjoy the beautiful lake through a window.

The area around Nagqu Station is known as Changtang Grassland. The Changtang (Qangtang) Plateau is the hinterland of the Tibetan Plateau.

The huge high-altitude grassland/arid area is surrounded by the Tanggula Mountains, Kunlun Mountains, and Kailas Mountains.

Changtang Grassland is the largest grassland in Tibet with a total area of more than 400,000 square kilometers (150,000 square miles).

It is almost totally wild and uninhabited with beautiful desert, mountain, and lake scenery. You can see herdsmen with their livestock from the railway.

After passing Nagqu, you will find that the grasses become more luxuriant and wet. The wetland area of Damxung County has an important station on the Qinghai-Tibet Railway.

On the grasslands of Damxung, you can often see herdsmen's cottages with cattle, sheep, and horses eating grass nearby.

In Damxung County, the train will run through the last mountain range on the Qinghai-Tibet Railway — the Nyainqentanglha Mountains.

In central Tibet, they divide Tibet into three regions: northern, southern, and southeastern. You will see a lot of colorful prayer flags hanging on pillars to worship mountain gods.

Mount Nyainqentanglha, the tallest peak in its range and the tallest peak alongside the Qinghai-Tibet Railway, and nearby Lake Namtso make up a sacred area in Tibet that attracts many Tibetan Buddhists for kora pilgrimages and meditation, making circumambulations around the mountain and lake.

Yambajan's steamy springs and geysers are the last types of scenery on the Qinghai-Tibet Railway.

Yambajan is famous for its geothermal resources. It is a long and narrow fault basin at the southern margin of the Nyainqentanglha Mountains, covering an area of about 7,000 square meters (1.7 acres).

Its geothermal energy and hot springs have been developed for power and tourism. Read more on Yambajan

Generally speaking, the best times to experience a Qinghai-Tibet train journey are April, May, September, and October due to pleasant weather as well as better views of the Tibetan Plateau than in the more cloudy summer months.

Also, these months are the best times to take a Tibet tour, unless you want to see one of the summer festivals.

See more on >> the best times to visit Tibet.

How to Take a Train to Tibet

There are more than 20 cities in China that have trains to Tibet. The major cities are Beijing, Xi'an, Shanghai, Chengdu, Chongqing, Guangzhou, Lanzhou, and Xining. Trains to Lhasa are very popular and always get fully booked.

To successfully book your train ticket, we suggest you book it from a travel agency by paying a service fee. We, at China Highlights, are some of the best at getting Tibet train tickets.

To see more about >>Qinghai-Tibet Train

China Highlights is able to help you with booking train tickets and getting a Tibet permit.

Travel on the Qinghai-Tibet Railway with Us

To visit Tibet, you must travel with a China travel agency. Some of our recommended Tibet tour itineraries include the Qinghai-Tibet Railway, and all of our tours can be tailor-made to include a Tibet railway journey. Tell us your requirements and interests, and we will expertly create your own unique Tibet tour.