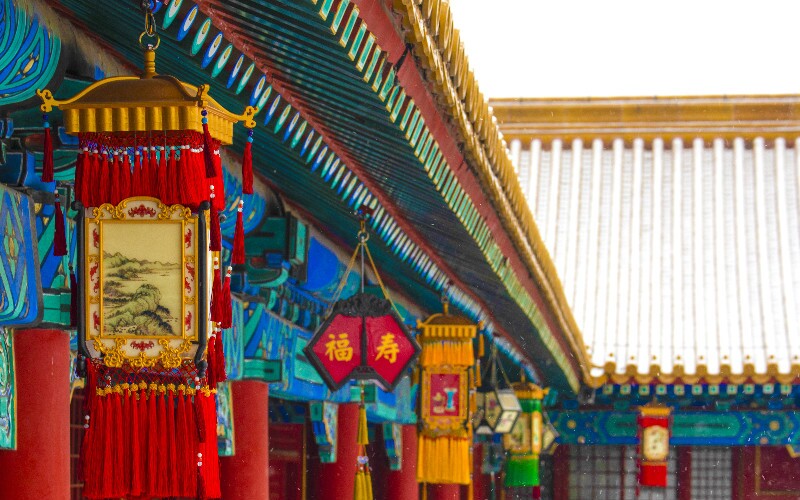 So, what are the landmarks of Beijing? Follow us to learn about the top 10.

There is no doubt that the Great Wall comes first among the landmarks of Beijing. It is the longest wall in the world, at a length of 21,196 km (13,170 miles). Its construction started during the Warring States Period (770–221 BC) and lasted over 2,300 years.

Sections of the Great Wall are located in 15 different provinces, though some of the best-preserved and most spectacular sections are in and around Beijing.

Mutianyu is the most magnificent fully-restored section of the Great Wall, popular among foreign travelers. Badaling is the most popular section among Chinese tourists and more crowded. If you have no idea which section to visit, read Badaling or Mutianyu: Which is Better for Visiting? for some inspiration.

If you are a hiker, the Jinshanling and Jiankou sections may be best for you. If you would like to see some different scenery, try a night-trip to the Simatai section of the wall. It is the only section open for night tours. Read more on The Best 10 Sections/Parts of the Great Wall to Visit.

More than 70 palaces and over 9,000 rooms are located in the 961-meter-long, 753-meter-wide and 10-meter-high rectangular courtyard. The important palaces are on the axis of the courtyard.

A row of mystical animal statuettes features along the ridge line of halls. Red walls and yellow tiles symbolize the supreme power of the imperial family. The Forbidden City embodies the essence of traditional Chinese architecture.

Twenty-four emperors and their concubines lived here. Many stories relate what happened within this courtyard. Some of it changed the course of history, though some of it sounds ridiculous.

Step into the Forbidden City and see what it looks like. Imagine how the emperors lived in ancient times and explore stories and secrets behind the palaces.

3. The Temple of Heaven

The temple is famous for its precise architectural layout, peculiar architectural structure and magnificent architectural decorations. It is the largest well-preserved altar complex in China.

Main halls lie on a south-north line in the middle of the park about 750 meters long, beginning from the Circular Mound Altar, to the Imperial Vault of Heaven and on to the Hall of Prayer for Good Harvests. The structure and design reflect the core of Chinese cosmology, beliefs and religion from earlier times.

Nowadays, the Temple of Heaven has become an exercise park for local people. They go there every morning to practice tai chi, kung fu and sword-dances.

The design on the National Emblem of the People's Republic of China shows Tian'anmen. Tian'anmen Square is at the center of Beijing. It covers an area of 440,000 square meters (0.17 sq. miles) and can host a grand gathering of one million people. It is the largest city square in the world.

In 1949, Chairman Mao proclaimed the foundation of the People's Republic of China from the Tian'anmen rostrum. The Mausoleum of Mao Zedong is at the south of the square; where Chairman Mao's body lies in a crystal coffin.

Tian'anmen has been the site of several important events in Chinese history. It therefore has high status in the hearts of many Chinese people.

5. The Bird's Nest and the Water Cube

The night view of Bird's Nest

Both the Bird's Nest and the Water Cube were built for the 2008 Summer Olympic Games. You can find them in the Olympic Park. In future, they will be renovated for the 2022 Winter Olympics.

The Water Cube is the world's largest ETFE (ethylene tetrafluoroethylene) application project. It features a unique bubble design. The surface of its "soap bubbles" reflects sunlight and makes the building resemble a water droplet glistening in the sunlight, from which it got its nickname: The Water Cube.

Near Tian'anmen Square, the National Grand Theater, Beijing's largest, covers an area of 118,900 square meters (29 acres). The main building of the theater has a unique shell shape.

The theater's exterior consists of 18,398 titanium plates and 1,226 pieces of transparent glass. It is completely surrounded by a man-made lake, looking from the air like an egg floating on water.

Lights are dotted on the surface. When night falls, the theater glitters. Various concerts and traditional Chinese operas performed there will transport you into a wonderful world.

The main building consists of a 52-floor tower (234 meters high), and a 44-floor tower (194 meters high). The two towers are connected at 162 meters by a large cantilever. In 2007, the building was nominated by Time magazine as one of the world's top 10 architectural wonders.

There is an interesting thing about the building. Beijing locals jokingly nicknamed it da kucha (dàkùchǎ, 大裤衩, literally meaning "big underpants") because it resembles big underpants!

On the 37th storey of the building (more than 100 meters high), visitors can enjoy a bird's-eye view of the city through its toughened glass floor.

Galaxy SOHO is the biggest shopping mall in Beijing.

With its streamlined design, Galaxy SOHO attracts people's attention, especially its bird's eye view. Four individual buildings have their own atrium and circulation core, but are connected at different levels to create a flow of dynamic beauty.

But the mall has created controversy. Some people think it occupies too large an area in the center of Beijing and clashes with the architectural style of old Beijing. Others praise it for having brought new features to Beijing's architecture.

At least in terms of its grandeur and aesthetics, it can be regarded as one of Beijing's landmarks.

If you want to talk about modern Beijing, you should mention the China World Trade Center (WTC).

The WTC is a building complex of 1.1 million square meters, now the world's largest international trade center. It consists of the China WTCTower III, along with Towers I and II.

The complex was completed in 2007 and Tower III is 330 meters tall with 80 floors. Located in Beijing's Central Business District, it integrates office, hotel, conference, exhibition, shopping and entertainment functions.

China Zun (Zun in Chinese means a large ancient wine vessel) or CITIC Tower is the tallest building in Beijing, 528 meters high. It was completed in 2018 and is now in use, featuring office space, luxury apartments, hotels, and a rooftop garden on the top floor.

Its architectural conception originates from the image of "Zun", traditional Chinese ritual vessels. The building rises to the top of the clouds, demonstrating its indomitable spirit, and reflecting oriental charm.

Explore Beijing's Iconic Buildings with Us

Travel China with Us

Create a trip and experience the charms of Beijing with us. We are eager to share the history of Beijing with you, along with interesting stories behind its buildings. Have a look at our popular itinerary below for inspiration:

Feel free to make an inquiry and tell us your preferences and needs. We'll be happy to tailor-make your Beijing tour.