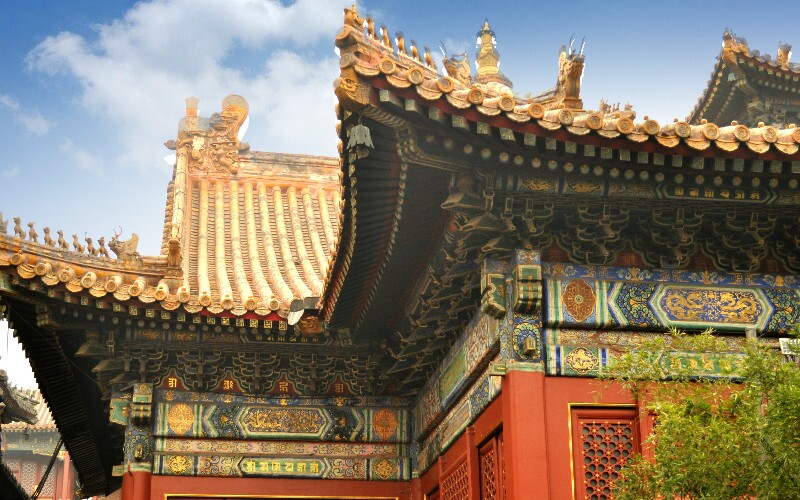 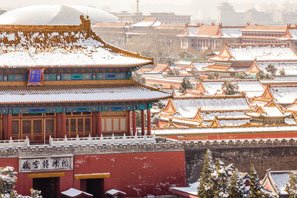 The Forbidden City in winter

Winter may not be the best time for you to tour Beijing, because it is very cold, but it undeniably has its advantages.

There is less crowding at the main attractions. Tourism has its lowest prices in winter. The air is dry and crisp. And Beijing is a good winter destination for those who love skiing, winter festivities, and snowy sightseeing.

What to Expect in Winter - Pros and Cons

You should expect cold weather with much less rain. Winter is actually preferable for those tourists who love drier and not very hot environments.

Actually, winter is the driest time of the year all over China. Sunny days in Beijing's winters can be perfect for those who love sightseeing, if temperatures below freezing point are not minded too much.

You also should expect less crowds (apart from at Chinese New Year), and it is the time tourist attractions, hotels, and flights reduce prices to encourage off-season travel spending, so expect to save a lot of money too. Some airlines even offer 80% off flights!

Beijing pollution is also more likely to be an issue in winter, though you can escape it in the suburbs and beyond, and there can be some very good days in winter. 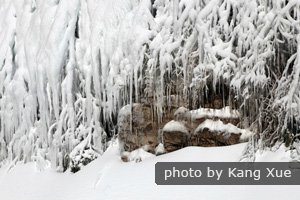 Longqing Gorge has some great winter scenery and activities.

Winter weather starts in November when the first snow falls.

In December, the cold wind is biting, and snow sometimes covers the ground of Beijing. There are only about two rainy/snowy days per month from December to February.

January is the coldest month in Beijing and it is freezing and windy. Along with February, it is the best time for festivities, skiing, and snow and ice scenery.

In March, Beijing weather changes from freezing to cooling, but it is windy and sandstorms are possible.

On average, Beijing experiences about eight snowy days per winter and rainfall is almost absent. See more on Beijing Weather. 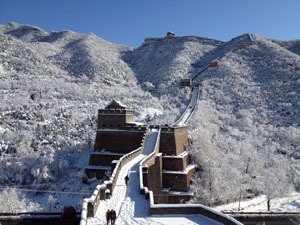 The Great Wall in snow

The Great Wall covered in snow: This iconic landmark of China provides a spectacular sight during winter, first due to the winter scenery and second, due to the absence of crowds than in any other times of the year.

The best places to see the special snow-sheeted sceneries of Beijing are at the Badaling Great Wall section, at the Badaling Ski Resort and at the Forbidden City where you especially admire the beautiful snowy landscapes at the Meridian Gate Square and the Southeast Corner Tower out from Donghuamen (东华门).

Other places that you can visit to see snow and snow covered sceneries in and near Beijing include the Longqing Gorge during the Beijing's Snow Festival, Taoyuan Xiangu for ice climbing over an ice wall made with frozen waterfall, and Jingshan Park to witness the Forbidden City peaks covered in snow.

You can also travel to the Shihua Cave in February. It offers a 2,500-meter tour with stalactites and underwater streams galore. You can also head to Chuandixia Village for dynasty-style courtyard homes and vistas that inspire snapshots and hand drawn artistry souvenirs.

Read more on The 12 Best Places to See Snow in Beijing. 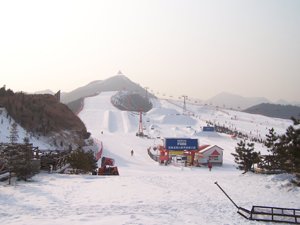 The best way to spend your winter in Beijing is skiing, including at the Badaling Ski Resort near the Badaling's Great Wall Section and in Shijinglong Ski Resort (one of the best ski resorts in China).

There are many other ski resorts to visit in Beijing in winter though, including the Nanshan Ski Resort, the largest ski resort close to Beijing.

Huaibei Ski Resort, which is 70 kilometers away from Beijing downtown, is the best for beginners.

And Beijing Snow World Ski Park is the nearest natural ski resort to Beijing city. It is located at Fenghuang Mountain of the Ming Tombs tourism area.

Read more on The Top 10 Ski Resorts in Beijing. 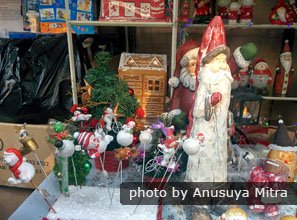 Winter is Beijing's time for most festivities and temple fairs, so you should expect the festive thrill among Chinese people. Chinese New Year is a holiday-mood-filled time when cultural activities held in parks and temples during the New Year holiday are the best way of experiencing Chinese culture.

There aren't many Christians living in China, but in recent years, celebration of Christmas in China has become more popular and is celebrated major cities like Beijing where a large number of foreigners live, and Western influence in greater.

You can also choose to visit Beijings top theaters for Christmas performances, do some shopping (prices drop greatly in Winter) and visit Beijing's top attractions during Christmas. Known as the "Spring Movement", the Chinese New Year travel Rush is the world's largest annual human migration, where many people working in urban areas travel home for holidays, so you should expect crowds traveling, but tourist attractions still to have fewer crowds.

There are many cultural activities to take part in including the Dragon Dances and Lion Dances. Many people go to Beijing's traditional temple fairs during the festival, for ritual praying, entertainment, snacks, and to buy crafts.

Decorations include decorating houses in red and wearing red clothes that signify power, happiness, and vitality and are believed to scare away ghosts.

After the dinner feast, many Chinese people go out to watch a huge fireworks display. Chinese fireworks are also thought to scare away evil spirits.

What better way to relax after a day of skiing or festivities than in the soothing waters of Jiuhua Hot Spring Resort in Changping District. It is near the Beijing Snow Ski Park and its waters contain numerous minerals and trace elements with curative effects. You can also get a traditional Chinese medicine health care massage at the spring.

Longmai Hot Spring Resort is built on the original site of the former imperial hot spring bathing area, as is Jiuhua, mid way between the Badaling Expressway and the international airport. Other winter food specialties to try are Chinese congee at Jindingxuan near the Lama Temple (Hepingli Xijie, Dongcheng District) and roast lamb at the 'Leg of Lamb Street' (Beixinqiao Santiao, Dongcheng District), and chuanr (spicy meat skewers seasoned with cunmin and chilly powder).

Winter is the best time to do shopping in China, because prices for all types of goods and services drop since there aren't many customers and visitors. Read more on The Top 10 Shopping Areas in Beijing.

Experience Winter in Beijing Your Way with Us 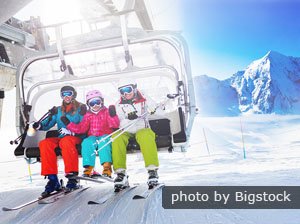 Customize any of the tour recommendations below or tailor-make a China tour from your requirements.