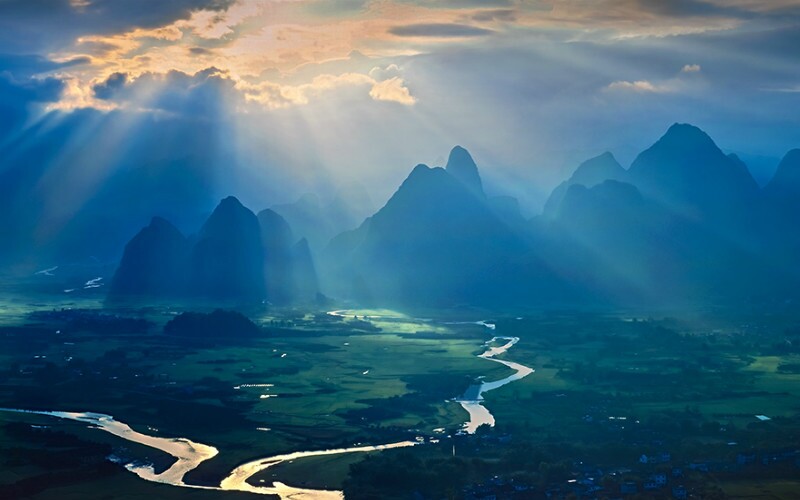 China has two of the ten longest rivers in the world, the Yangtze and the Yellow River. These two and eight other rivers in China stand out as worthy places to see during your trip to China, where the scenery is beautiful and the culture is rich.

The Li River landscape is the essence of Guilin. It flows through the city decorated with lush limestone hills, which take a variety of different shapes. If you take a bamboo raft cruise on the Li River, you will feel you are in a Chinese landscape painting. The Li River is a must on a Guilin tour.

Cruising: The scenery seen during a river cruise is memorable. Few places on earth have such jagged hills that can be easily viewed during a leisurely boat cruise. It's been called one of the world's 15 best rivers to see.

River rafting on the Li River or other tributaries around Yangshuo is a fun option too. If you want to know the difference between touring the Li River by cruise boat and by bamboo raft, read: "Li River Cruise vs Bamboo Raft — An Australian Expat's View."

Hiking: For outdoor lovers, hiking along the Li River is a good chance to get closer to nature and local life. The most popular route is from Yangdi to Xingping, which takes about 5 hours. Contact us to make the Li River part of your China discovery.

The Chinese name for the Yangtze River is Chang Jiang which means 'the long river'. It is the longest river in China, and the third longest in the world. From mountain gorges with excellent scenery and rugged hiking to the horizon spanning cityscape of Shanghai, the premier sightseeing river of China goes through nine provinces and runs into the East China Sea.

Tiger Leaping Gorge, with the Yangtze hurtling down it, is one of the deepest canyons in the world, and is known for being one of the best hiking areas in China. There is a good hiking path high above the Yangtze River to get away from the noisy throbbing roar of the river, and there are inexpensive accommodations along the way. Other deep canyons, such as the Grand Canyon, don’t have cheap hotels and restaurants along canyon trails like this does. It is a UNESCO World Heritage natural preservation site.

The Three Gorges are some of the most beautiful scenic areas on the Yangtze River. In contrast to the ancient sites, like Fengdu Ghost City and the mysterious hanging coffins, the modern wonder of the Three Gorges Dam has the world record for electrical generation capacity. The dam is also used for irrigation and flood control, whilst making the Three Gorges serenely navigable for a Yangtze cruise.

This river basin is thought of as The Cradle of Chinese Civilization. Over the millennia China's mother river has brought both prosperity and havoc by major flooding. Compared to the mighty Yangtze, the river has dried to just a trickle now, but ancient sites and cities line it. The Silk Road crosses it at Lanzhou.

The Yellow River is the second longest river in China at a length of 5,464 kilometers. It originates on the Plateau of Tibet, flows through the stunning deserts and grasslands of Zhongwei, Yinchuan, and Ordos, and empties into the Bohai Sea. Due to soil erosion and siltation, the lower reaches of the Yellow River have become "the suspended river", flowing above its flood plain in silty levees. Read more information on the Yellow River.

Xin'an River is the main source and the upper reaches of the Qiantang River, originating in Xiuning County, Huangshan Prefecture, Anhui Province, and running for over 373 kilometers.

Xin'an River is famous as a crystal clear river, and the water is clear in all seasons. There are green mountains about the winding river. Many ancient poets praised it with their poetry. It has enjoyed such eulogies as "cool and refreshing world" and "the way of Tang poetry".

Hiking along Xin'an River is another special experience for the tourists to enjoy the magnificent natural scenery of the countryside.

The Yulong River is a small and shallow tributary of the Li River running for over 35 kilometers. It runs from the mountains of Lingui County to Yangshuo's tourist zone.

The Yulong River is also call the "Little Li River" as it captures the essence of the Li River landscape in miniature. It is a good place for being close to nature, with green hills, silky water, fertile fields, and ancient bridges.

Beginning in Guangxi Province, this river spreads out as it reaches the sea to cover a very large delta area that includes some of China's biggest and richest cities. This area might be considered China's electronics heartland, and is now one of the world's major industrial and financial centers. There are a multitude of attractions for tourists. Canals crisscross this densely populated urban area, and in Guangzhou you can take a Pearl River night cruise and see the city lit up colorfully.

The Lancang River is a tropical river that flows down among natural scenic attractions and rural country. Xishuangbanna is a tropical rain forest resort area. The Lancang is also called the Mekong River in Vietnam, and it is still a rich freshwater fish ecological system.

The Nujiang is called the Salween River outside of China. It runs through Yunnan Province and goes to Thailand and Burma. It forms in Tibet at glaciers near the headwaters of the Yangtze and the Mekong. See our Yunnan Tours

The Songhua River, famed for its Rime Scenery, is a major tributary.

The river is called the Amur River by the Russians. It forms the border between the two countries and flows through Mongolia, China, and Russia. A person traveling along the course of the river would see steppes in Mongolia and dense forests in Russia.

This river is called the Brahmaputra River in India and Bangladesh. It originates near Mount Kailash and Lake Manasarovar, and is distinctive in several ways. It is said to be the highest major river in altitude and goes through one of the deepest of the world's valleys called the Yarlung Tsangpo Grand Canyon. The scenery is spectacular. Though it is off the beaten track, contact us and we can customize a Tibet Tour for you to include the river.