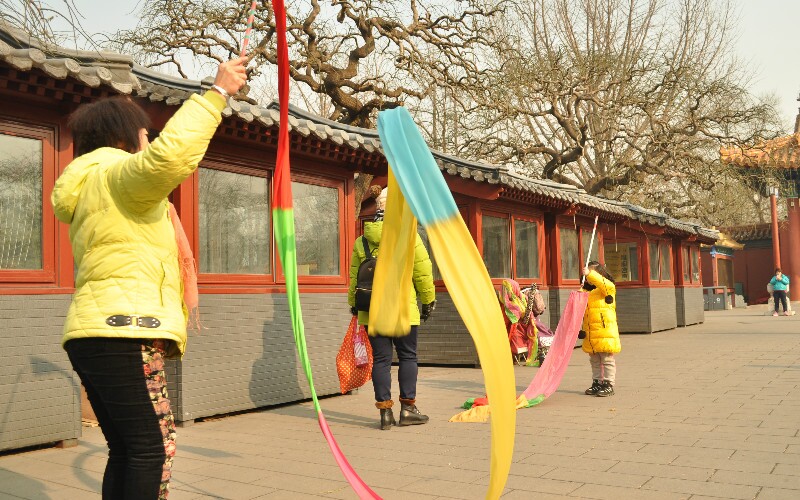 Visiting Beijing Parks on a Budget

Praised as one of the hottest tourist destinations in China, Beijing is of great historic, cultural and natural value. Apart from the imperial palaces, ancient temples and comprehensive museums, some parks at low prices (lower than 50 yuan) are great places for strolling, relaxing, and also sightseeing.

China Highlights has listed the best 10 parks requiring a low entry fee, so that you can make a selection based on your itinerary. The information for each park includes a brief introduction, ticket price, transportation details and opening hours. The parks are listed according to the ticket prices from the lowest to the highest.

Any specific interests while you are touring in Beijing? Contact us for customizable tours of Beijing or see our popular Beijing tours with top tour guides by China Highlights.

You can overlook the city of Beijing on the summit of Jingshan in the park, because it is located on the central point of the south-north axis of Beijing, facing the north gate of the Forbidden City.

Vigorous cypresses are planted widely in the park, creating a quiet and solemn atmosphere with the golden-glazed ancient pavilions.

Activities: In May each year, more than 20,000 peony roses are displayed in the park. You can be overwhelmed by the flower blossoms' ocean and have a unique tour in Jingshan Park.

2. Ditan Park (Altar of the Earth)

Similar to other parks in China, the natural scenery in Ditan Park is beautiful. Together with a number of ancient buildings, the park looks peaceful. Verdant trees in spring, sparkling lakes in summer, golden foliage in autumn, and dreamlike snow scenery and a busy temple fair in winter, make Ditan Park suitable for sightseeing, but also for experiencing culture.

Activities: The temple fair is held in Ditan Park during the Spring Festival every year, from 9am to 5pm. You can witness a series of Chinese traditional activities (including Chinese operas) and taste Beijing's traditional snacks (like sugar-coated haws) here. The entrance fee for the temple fair is 10 yuan.

Activities: The Taoranting Park Temple Fair is one of the busiest and most popular temple fairs in Beijing and is held during the Spring Festival every year. Lots of Beijing snacks, traditional performances and other interesting gadgets can be found there.

Yuyuantan Park covers a large area and water surface in the Haidian District, beside China Central Radio and Television Center and Chinese Century Altar. Cherry Garden, Liuchun Garden, Zhongshan Garden and Ancient Pine Forest are the main attractions in the park, which paint a great natural landscape picture in the park.

It is one of the docks of popular water tour routes in Beijing. Visitors can start from Kunyu Dock located at the northern bank of Bayi Lake in Yuyuantan Park, passing through China Central Radio and Television Tower, Beijing Water Park and China Century Monument to the Summer Palace.

Activities: The Cherry Blossom Festival is celebrated in Yuyuantan Park in spring (from late March to the end of April) every year. Yuyuantan Park is one of the best places to see flowers in Beijing.

Zhongshan Park was built in honor of the great revolutionist Sun Yat-sen, who is considered as the "father of modern China". It is located in the south of the Forbidden City and west of Tian'anmen Square with convenient transport conditions. Many ancient buildings can be found in the park, including the 'Altar to Land and Grain' and the 'Peace Safeguarding Arch'.

The beautiful natural landscapes in the park, consisting of small lakes and ancient pavilions, greatly interpret the concept of a classic Chinese garden.

Activities: The Spring Flower and Tulip Blossom Festival is held from early April to early May. Visiting Zhongshan Park in this period is best due to the gorgeous flower blossoms and comfortable weather.

Possessing more than 20 scenic spots and being the venue for some beach volleyball, Chaoyang Park is one of the most comprehensive parks in Beijing. This park not only has a large collection of beautiful natural landscapes, but is also a big modern business area.

Activities: A number of festivals (like the 'Europe Cultural Exhibition') and exhibitions are held in Chaoyang Park every year, which attract thousands of visitors.

Fragrant Hills Park is a large-scale park with a huge covering of mountains and forests. Lakes and ancient buildings are interspersed between the mountains.

Best time to go: Autumn! You can be shocked and overwhelmed by the strenuous mountains blanketed by foliage. Numerous travelers come to Beijing with the main purpose to appreciate the golden leaves as Fragrant Hills Park is one of the most famous and best places to see foliage.

Top things to do: Photography and hiking.

Located to the west of the Forbidden City and Jingshan Park, Beihai Park is one of the best-preserved imperial parks in the center of Beijing.

More than half of the area is taken up by a large lake, where lots of travelers go boating in the summer and skating in the winter. The White Pagoda on the mountain beside the lake is the symbol of this park, which offers a vantage point with a beautiful view of the whole park. Other ancient buildings, such as Hao Pu Creek Garden, Quiet Heart Studio, Nine-dragon Screen, Five Dragon Pavilions and Circular City, show different effects of mountain-water combinations in ancient Chinese architectures.

The Temple of Heaven, which used to be a holy place for ancient Chinese royal families to offer sacrifices to heaven, is a large park in the east of Beijing. The main buildings in the park from the south to the north are the Circular Mound Altar, the Imperial Vault of Heaven, and the Hall of Prayer for Good Harvest. They interpret the features of ancient Chinese architecture well.

Consisting of the Plant Exhibition Area, the Scenic Spot and the Historical Resorts, the Scientific Research Area and the Nature Reserve, Beijing Botanical Garden covers a large open area between Fragrance Hill and Yu Quan Mountain. It is without any doubt that you can see hundreds of plants there, even some rare species.